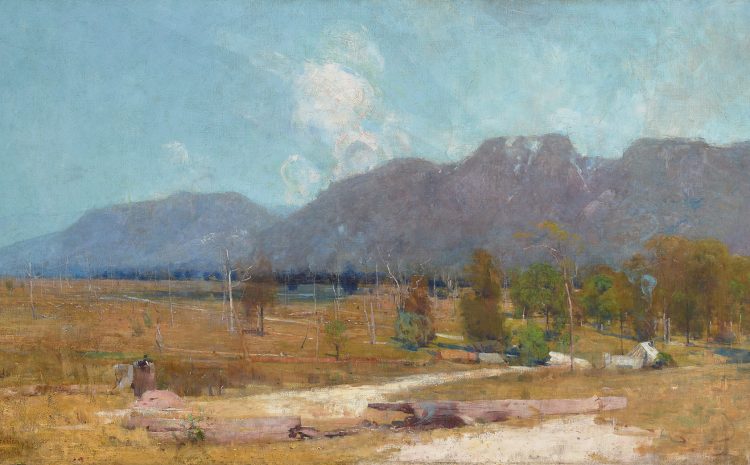 In late 1893 a young, emerging Australian artist without formal artistic training set off from an artists’ camp at Sydney’s Little Sirius Cove, to go bush.

After taking the train to Taree he explored the challenging terrain of the Manning region on horseback in search of subjects to paint. After two weeks happily riding through this unfamiliar, rugged landscape alone, sleeping under the stars, he glimpsed the dramatic rocky outcrops overlooking the small town of Gloucester. At once he knew he had found what he was looking for —  “a noble rugged range of rock – standing a firm barrier ’gainst the Western sky – below, a rich gold plain with peaceful herds“:  the Bucketts Mountains.

He stayed long enough to complete two canvases and four smaller works of Gloucester’s surroundings.  The young artist was Arthur Streeton, since acclaimed for his classic Australian landscapes.

Streeton’s paintings of landscapes north of Sydney (the Blue Mountains,  Gloucester and the Hawkesbury region) would become hallmarks of the Australian impressionist style.  His idyllic Golden summer, Eaglemont, painted in 1889 while living at an artists’ camp in Victoria, is recognised today as an Australian masterpiece. It has achieved record prices each time it has sold and is on permanent display in the National Gallery of Australia.

And his wide-format landscape Still glides the stream, And shall for ever glide was purchased by The Art Gallery of New South Wales (AGNSW) as early as 1890.

Together with the purchase of his iconic image of the death of a railway worker in an explosion during the construction of a railway line across the Blue Mountains, Fire’s on, in 1893, Streeton explored locations further inland which indirectly led to his greatest 1890’s landscapes.

as Landscape: the AA Co’s million acres) 1894, treats us to a sunny, expansive view across golden-brown grassland, a fallen log smoking in the left foreground, dominated by the towering silhouette of the purple Bucketts under a bright blue sky.

This painting, bearing the inscription “Australia” after his signature, was perhaps intended for an international audience. Streeton was confident in his work to send it to Charles Conder in Paris for submission to the Salon de la Société des Artistes Français, but it did not arrive in time for inclusion.

Streeton was reunited with this Gloucester landscapein London in 1899 where it did not sell.  Apparently it was also declined when offered to the AGNSW’s trustees but the Gallery finally purchased it in 1918 for 200 guineas.

The second large Gloucester landscape, going by various titles but listed in an 1894 exhibition catalogue as Gloucester Buckets (grey) and as “disappeared”, was recently discovered by X-ray, concealed under another Streeton painting, a still-life, Lilium auratum c.1909.

Fortunately, The Gloucester Buckets can again be admired in the original.  The current landmark exhibition at the AGNSW in Sydney, Streeton, displays more than 150 of his paintings, drawings and watercolours from 42 public and private collections around Australia, some not exhibited publicly for over a century.  This exhibition presents an in-depth survey of the artist’s unique contribution to Australian art from the 1880s to the 1940s. It is the most significant retrospective of this iconic impressionist, whose sun-filled landscapes and shimmering seascapes captured the spirit and optimism of Australia.

This exhibition is worth a visit. As is our area, inspiration for a pioneer artist and artists of today.