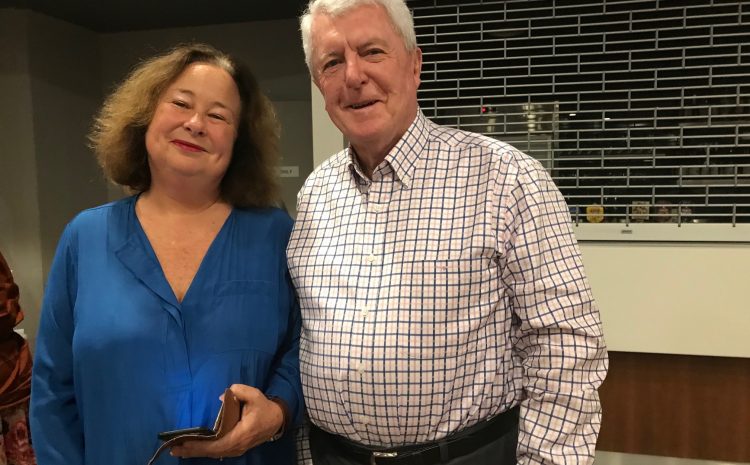 Author, award winning journalist Suzanne Smith, and former GTCC Mayor Paul Hogan at the launch of her book, “The Altar Boys” at Club Taree. Commented Mr Hogan – “The worst thing about betrayal is to know that its being done by someone whom you trusted the most.”

BOYS WITH EVERYTHING TO LIVE FOR … A COMMUNITY BETRAYED … AND THE WHISTLE-BLOWER PRIEST WHO PAID THE ULTIMATE PRICE . . . A TRUE STORY.

Glen Walsh and Steven Alward were childhood friends in their tight-knit working-class community in Newcastle, NSW. Both proud altar boys at the local Catholic church, they went on to attend the city’s Catholic boys’ high schools: Glen to Marist Brothers, Hamilton, and Steven to St Pius X. Both did well: Steven became a journalist; Glen a priest.

But their lives came to be burdened by secrets kept and exposed. Glen discovered that another priest was sexually abusing boys and reported the offender to police, breaking his vows to the Catholic ‘brotherhood’ in the process. His decision to give evidence regarding the cover-up of clerical abuse at a landmark trial ended in tragedy. Meanwhile, Steven was fighting his own battle to overcome a traumatic past, a battle that also ended in tragedy. Ensuing investigations revealed that at least 60 men in the region had taken their own lives. What had happened, and why were so many of those men from the three Catholic high schools in the area?

Six-time Walkley Award-winning investigative reporter Suzanne Smith has written and intense and  explosive expose of widespread and organised clerical abuse of children in the outskirts of Newcastle, Taree and the Manning Valley, and how the cover-up in the Catholic Church in Australia extended from parish priests to every echelon of the organisation.

Focusing on two childhood friends, their families and community, this gripping story is backed by secret documents, diary notes and witness accounts, and details a deliberate church strategy of using psychological warfare against witnesses in key trials involving paedophile priests.

Here Suzie Smith tells us the background to her controversial book.

“I never thought I would write a book on the decades of clerical sexual abuse cover up in this region of Taree and across the Maitland-Newcastle Catholic diocese.  I had covered more than 40 stories over eight years for the Australian Broadcasting Corporation, mainly on the now retired late night television show, ‘Lateline.’ I was a senior reporter there and one of my stories helped trigger the Royal Commission into Institutional Responses to Child Sexual Abuse.

In 2014, I left ‘Lateline’ and started work at Foreign Correspondent, another TV show on the ABC. I had thought my reporting on clerical abuse and the collateral damage to entire communities was over.

That was until my close friend and colleague, Steven Alward suicided. He had been a fellow journalist at the ABC for more than 20 years and was sometimes my boss, but always a mentor and supporter of my work.

It was November, 2017 and my friend, Steven, contacted me to tell me that Father Glen Walsh, an Assistant Parish Priest in Taree in 1996 – 1997 had suicided. They had grown up together from the age of two in the close Catholic community of Shortland, in Newcastle. He was very sad about the priest’s death. But then he told me something ominous. He said I should investigate the priest’s death. He had been bullied according to Steven.

I knew about Father Glen Walsh. He had ended up a witness for the prosecution in the case against Archbishop Philip Wilson. Father Walsh had gone to the police about a fellow priest back in 2004, and he had encouraged another victim of this priest to come forward. Walsh’s evidence had helped convict the priest and then later, it helped in the charging of the senior cleric. This was unheard of in Australia; A priest going to the police.

Father Glen Walsh suicided two weeks before he was to give evidence in a major criminal trial against Archbishop Philip Wilson. Wilson was convicted but later acquitted on appeal.

I agreed to meet with my friend and colleague, Steven Alward in January. I was going away for much of December and so was he. But by the time January 2018 came around I got the terrible news that my friend, Steven Alward, had also suicided. He was six weeks away from getting married.

Both men, who grew up together, had died. Now the professional became personal.

When the police report came through about Steven, there was a shocking admission. Steven had admitted being sexually abused by a priest when he was a teenage boy. The priest was a teacher at his school, St Pius X in Adamstown, Newcastle. The priest’s name was Father John Denham.

Father John Denham was the Master of Discipline at St Pius X from 1975 until 1980, but by 1981 he was sent to Taree. He stayed there until 1986, when the complaints got too much and he was whisked away to Sydney to be the Chaplain at the prestigious Waverley College.

By 2019, Father John Denham had been convicted of abusing 59 victims, mainly boys with an average age of 13 years old.

But he had a long association with Taree and Wingham. He used to travel up there before 1981, often with young boys in tow from St Pius X and other places. This included my friend, Steven. He would bring Steven up to the Manning for weekends. Steven reported they would stay at a place with another priest and there was a swimming pool. Denham would ply the boys with alcohol.

Much later, Judge Helen Syme would hear about Denham’s shocking behaviour in the NSW District Court. There was another priest who would also be involved in Denham’s offending, Father Ron Picken from Wingham. Picken would have boys and Denham stay overnight. He gave testimony that one boy was so drunk, that Picken had to bathe him to sober him up. In the end, Judge Syme said Picken and Denham were part of a conspiracy against children. In 2015 she said;

“The apparently the protected status of the offender throughout his offending is a matter so obvious it cannot be ignored … The combined set of facts lead to an inescapable conclusion of the active or tacit collusion by at least 2 other church officers.”

Here Judge Syme is referring to the Principal of St Pius X, Father Tom Brennan and the priest at Wingham, Father Ron Picken. She said;

“There is sufficient evidence in both set of facts to conclude complicity in the offending behaviour by these other church officers which supports a finding of organised criminal activity. I am aware that such a conclusion requires a finding beyond reasonable doubt. The obvious conclusion drawn from both sets of facts is that at least Father Brennan and the Wingham priest, Father Picken, knew of and either ignored or encouraged his activities.”

But Picken and Denham were only the tip of the iceberg in Taree and the surrounding areas.

Since 1958, eight priests who were sent to Taree had been the subject of complaints of child sexual abuse or cover up allegations.

Father Barry Tunks was charged with Father John Denham and another man over allegations of child sexual abuse that happened in Taree back in the late 1970s.  The charges against Father Barry Tunks were withdrawn but Denham was eventually convicted in 2019.

Father Glen Walsh was ordained 1996 and then sent to Taree as an Assistant Parish Priest in November of that year. He told his family and close friends, that he heard many stories from parishioners about the behaviour of priests like Denham.

From here, Father Glen Walsh was sent to other parishes, replacing priests who had been removed due to criminal behaviour.

In researching my book, ‘The Altar Boys’, I came across many stories from people about widespread offending in this region over two decades. I was told that Father Peter Brock, another offender made frequent trips to the Manning. I have not been able to verify some of the claims but there are a lot of secrets still be told. Teenage boys were brought here by priests and others and they were sexually assaulted. It’s time all these secrets were flushed out.’

‘The Altar Boys’ is available at all good book stories or you can order here:

If you have any information you would like to share please go to the police. They are now willing, especially trained in these matters, and receptive and anxious to hear any information going back any length of time.

Now is the time to tell what you know and see justice done and free the demons.