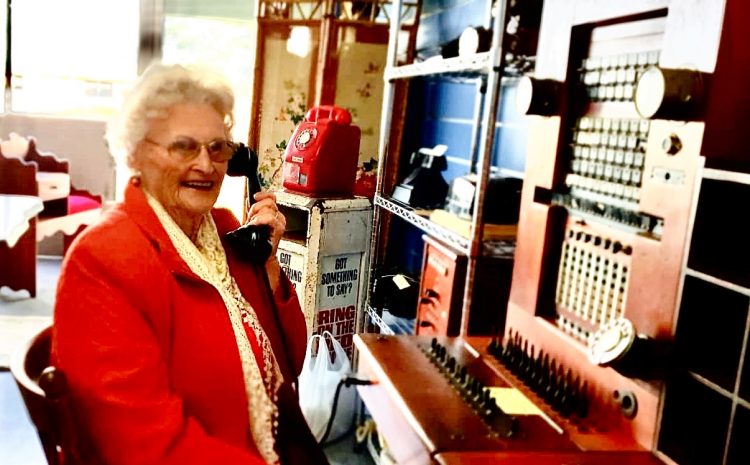 My life began as a Telephonist at the early age of thirteen when I started work at Adam Murray’s Post Office and  shop at Dyers Crossing.

In early February 1959 Charlie Lee, the mailman from Wingham to Dyers Crossing told me there was a position for a Telephonist at Burrell Creek, as Daphne Squires was getting married in March.

So I decided to take the job.

In those days it was a live in arrangement starting with pay of 8 pounds a week and I had to pay board out of that.

This Post Office sorted mail for Bobo Creek to Mooney’s Gap for the Bird family. Kimbriki was another run, all the other mail including Kundibakh was re-sorted for Charlie Lee to deliver on his way to Dyers Crossing.

Some of the Mailman were:

Claude Murray  (the had a horse and sulky)

One of the jobs at the Post Office was telegrams. The district was in a very big pea and bean growing area in the winter months. The agents all sent a telegram with your price of the day. Other telegrams were Marriages, Births, Deaths and many more.

In those days, if you were unable to call a number, my job was to know where everyone was.

We operated a hand petrol pump, the fuel was delivered by Merv Allport from Wingham who had only one arm.

In April 1959 I met Peter Taylor, a farmer from Bobo Creek, No 29 on the switch board. (I knew everyone by their number!)

On 26th January 1963, Peter Taylor and I married, living on the family Dairy farm at “Rodesville” Bobo Creek.

We now live in a villa in Taree and have been married 57 years.

I spent many happy hours at this beautiful switch board. So it is wonderful to “re-visit” it again.’

Many thanks to Don and Kate for the privilege of once again being able to sit at this switch board. As I view No 29 and look back, I realise what a wonderful time of my life it was at Burrell Creek.

The Telephone exchange is on display at Olympia Antiques now at 39 Muldoon Street Taree WED, THUR, FRI from 10-4 and SAT 10-1