AS A BIKE PEDALLED PAST MY GARDEN GATE 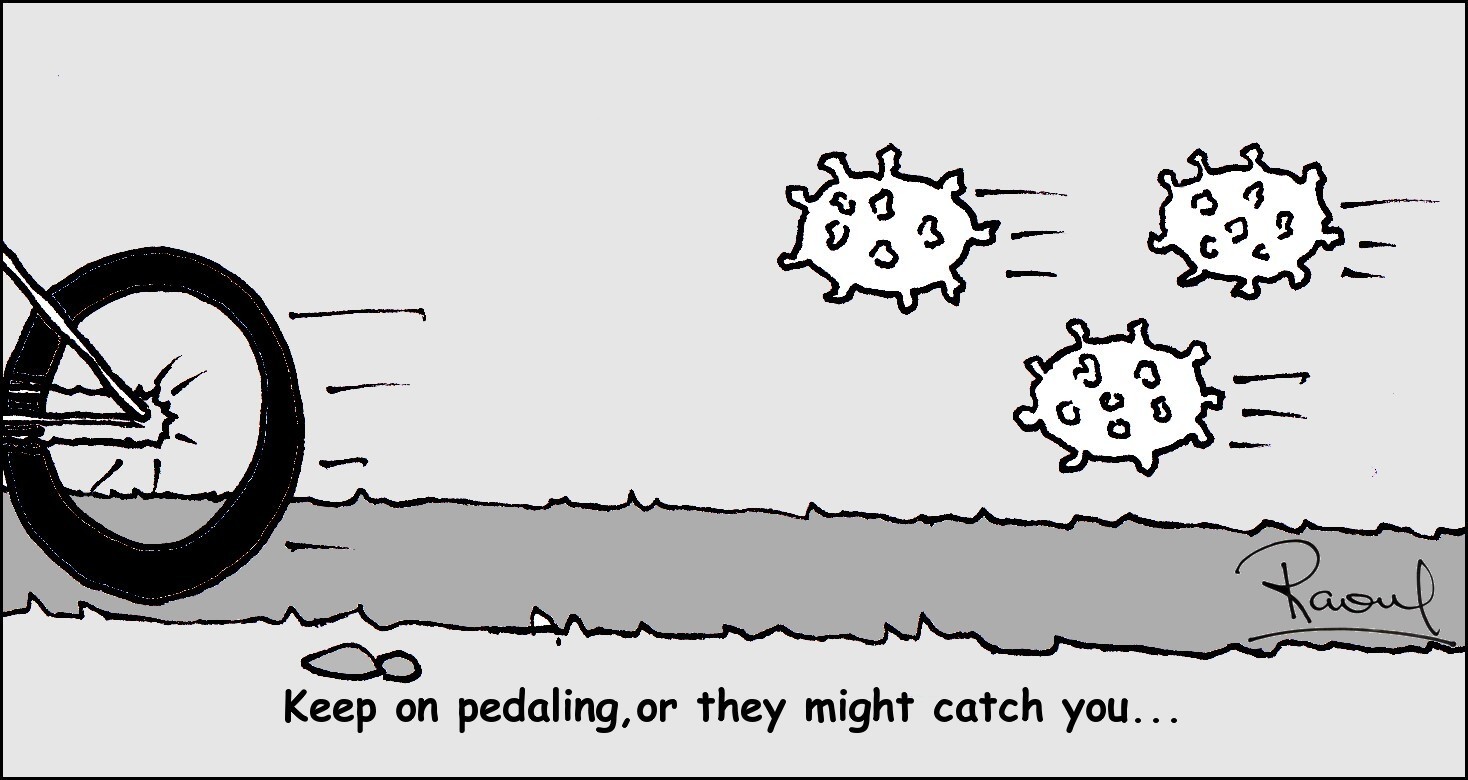 The sole cyclist pedalling in the distance was singing an unfamiliar tune, over and over, mantra-like. As he got closer and then went past, the lyrics became clearer. ‘Hey, Hey coronavirus-stay away from me’. As he wafted into the distance, I had to wonder whether this came from a place of fear, or was it the song of a warrior?

Whatever, the clarity of the cyclist’s song is a reminder of a greater danger, that of an underlying attitude in some groups; people who are brash, blasé or complacent about the invisible enemy. Some of the young and the restless think that Covid19 only attacks the old and unhealthy, so why should they have to give up their cushy jobs and vibrant jetting around just for sake of saving a few of the halt and the lame?

A septuagenarian Slovenian philosopher called Slavoj Zizek is very much the madly intelligent old professor, a very unusual character. Check him out on U-tube. In his new book, ‘Pandemic!’ He calls the virus a “blindly self-replicating pathogen”. He added, it uses human bodies “as its copying machine”. He calls it “undead, like a vampire or zombie”.

These conjured images remind me of an old debate in medical school about the very nature of viruses, as to whether they are even a true life form. It’s worth a passing mention that viruses are widespread in the natural world. Most are harmless or even helpful. But they are not cellular with a nucleus, so very different to a bacterial germ, just packages of DNA or RNA. Message in a bottle.

So how does SARS-COV-2 virus seem to know how to get around?  An Australian Health Minister even remarked, “it has a mind of its own”. All this imagery is confronting, but it can help to visualise what we can’t see.

In contrast to some countries, the ‘lucky country’ has so far done well. We at least have guidelines and a semblance of leadership.  Official decisions might not be perfect and mistakes are made but we are learning as fast as possible. In the modern era, we have Science to guide us. We have an exact description of the virus’s anatomy but its ongoing behaviour is still only partly understood. Let’s remember that for the climate emergency as well. Everything is related.

Today’s heroes are the health workers who have to grope through this pestilence.  For them, it is a danger to the young as well as for the old.

So what can we do as individuals and communities? Conscious awareness is vital, such as hand-washing after the toilet, before food, transfer between locations and first action on arrival home. Soap may seem so old fashioned, but we know from science that the deadly viral message is packaged in a thin layer of fat. Sanitiser and soap are the fat-busters we need to keep using.

This enemy is unseen until it attacks. The singing cyclist wants to keep it away from himself. Fair enough. It has to go further.

Each of us in the global community has a duty of care to each other as well.

If you have reached this far, thank you for reading. Comments are welcome via editor@manningcommunitynews.com.

Retired MD and writer in travel and health