YOU COULDN’T MAKE IT UP! 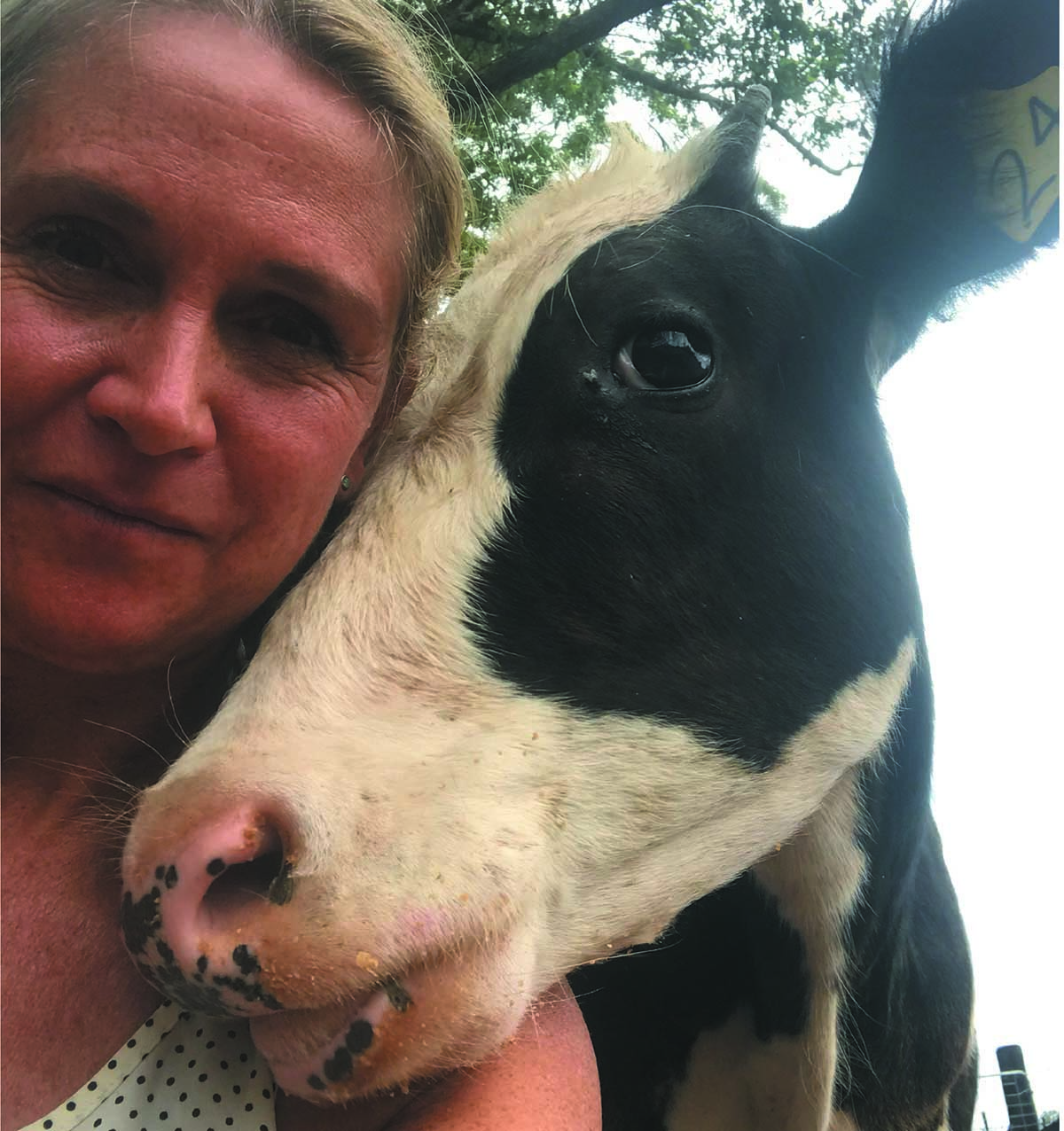 A city nurse meets a broken cowboy in a Sydney hospital. After 3 days he asks for her number…and her life is upended. A Di Morrissey novel? No. This is for real.

My name is Karen and with my husband Ian, I own a property in Burrell Creek called Bluebell Hill Farm. We run a horse agistment and camping business on our 100 acres and we also own a herd of 20 cows and calves. Alongside that I teach Pilates mat classes 3 days a week in Tinonee. Most days I have dirt under my nails, sweat running down my back, hay in my bra and cow poo on my boots. But life wasn’t always like that for me.

I was born in London in a suburb called Lambeth, famous for its War Museum, Archbishops Palace and the cockney Lambeth Walk. My family moved to the county of Kent after I was born and we lived in Chatham, a naval town where Lord Nelson learnt to sail, and Charles Dickens lived as a boy. I did all the usual girlie stuff like ballet and horse riding, went to grammar school and got an office job in an Australian insurance company.

In the year 2000, I emigrated to the Northern Beaches of Australia with my partner, father to my two children. I was an “executive wife” and life was good. We wined and dined at fancy restaurants, I had designer clothes, sparkly jewellery, handbags for every occasion and I owned over 50 pairs of shoes! My ambitious husband worked 12-hour days, travelled overseas for weeks on end and when he was home either slept all day or went cycling with his gang of MAMILs (middle aged men in Lycra!). Once the kids were in High School, I found myself lonely and bored, so I threw myself into study. I gained Certificates in Meditation, Wellbeing, Nutrition, Anatomy and Physiology, Pilates and Aged Care. 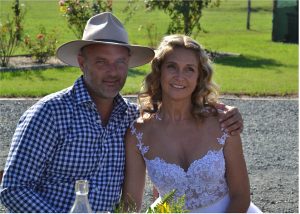 Then in 2016 I decided to become a Nurse. At this time my marriage was in a nosedive, so nursing was a great distraction and as the year progressed, I became more of a nurse and less of a wife. Before the year was over, we had separated (amicably) and our beautiful northern beaches house was sold. With my alimony I planned to buy a unit, continue my study and become the best nurse I could be.

As part of my Enrolled Nursing training I had to undertake work placements. For my final placement I was based at a private hospital in Sydney on the orthopaedics ward treating patients from all over NSW.

I was in my last week of training when I introduced myself to a male patient who had just undergone two operations for a spinal fusion. He was my patient for the next 3 days and each day our nurse/patient chats became a little more involved.

We discovered we had an awful lot in common. We were both separated, both had a daughter called Emily who both had an older brother called Joseph and both of us came from Chatham, mine in the UK and his in Taree!

Ian lived in Nabiac at that time and was being flown up to Taree the next day, so I said goodbye and wished him good luck and that was when he asked for my number which I duly wrote for him on a vomit bag! Who says romance is dead?

The next week I returned to work in Sydney while Ian went to rehab in Wingham. For the next month we kept in touch via text and phone. It was getting to the point where I felt we needed to spend some quality time together to see if this was something worth pursuing. After all I was fresh out of a 20-year marriage and I didn’t want to be a love-struck teenager again!!  The problem was that Ian couldn’t drive due to his surgery so I had to make the journey north to a place I had never heard of to meet a man I had known for only a month.

My BFF thought I was crazy. She told me “If you get there and its like that scene out of Deliverance, run for your life!”

I have never been so nervous as on that 3-hour drive but it was worth the wait and we spent a glorious 5 days together. It was the classic whirlwind romance, something I never thought would happen to me! I literally had to pinch myself every day just to check this wasn’t some crazy fairy-tale dream.

A few months later Ian moved down to Sydney to stay with me and meet my two teenage children, who instantly gave him the thumbs up. Then in October, 10 months after we met, Ian got down on one knee to propose to me on Manly Wharf in front of a huge crowd of Friday night revellers. He had to be helped back up again because of his back but the crowd went wild and we were given free champagne!

The money from my divorce was enough to buy a small unit in Sydney but we both knew that living like this would drive us crazy so we decided to look further afield for a place we could call home. Ian had been brought up on 500 acres in Gloucester and I had always dreamt of living on a farm ever since I was a little girl. I love horses and horse riding; I am obsessed with cows, ducks and dogs and I adore the countryside.

We drove around the Manning Valley to check out some houses for sale and fell in love with Burrell Creek. It reminded me so much of the beautiful Kent countryside where I grew up. Three years ago it was the greenest place I’d seen; the rough country roads, the smell of cows, the stunning sunsets, the trillions of stars you could see at night and the rolling tree lined hills made me feel so happy and strangely at home.

So, in December 2017, Ian and I bought our first home together and the following March we were married on a glorious day in a beautiful outdoors farm wedding. I wore cowgirl boots under my wedding dress, Ian wore his trusty Akubra and we did whip cracking!

Once the celebrations were over, we got to work buying cattle and clearing 60 acres of waist high grasses and lantana. I had no farm knowledge at all so in the space of 12 months I had to learn how to drench and inject cattle without getting kicked, how to bottle-feed hungry calves, how to ride a tractor (although I did manage to crash it into a tree twice!) I learnt how to use a ride-on mower, an axe and a chainsaw but no matter how hard I tried I could not master how to pull start a pump, or a whipper snipper or a leaf blower or in fact anything with a bloody pull start (why can’t they all just have a push start button?) I also learnt firsthand that barbed wire, lantana and cockspur can all inflict dreadful flesh wounds on unclothed skin! I had never worked so hard in my life, but I was fitter than ever and built up muscles I never knew I had.

During those first few months, we ran out of money and had to sell our biggest cattle at the local markets but each time we lost more money than the last. The drought was starting to have an effect. We bought second-hand tools and machinery at garage sales and sold homegrown pumpkin and squash at our front gate for a few extra bucks. We laughed and we cried and threw every bit of energy we had into our dream. It was a crazy year of ups and downs, but we did it together and I finally knew what a great partnership marriage could be.

In December 2018, exactly one year after we moved in, Ian and I signed up with You Camp and hosted our first campers for Christmas. At the same time, we launched our horse agistment business and in 12 months went from 1 horse to 25.

After all our hard work, the farm was finally up and running, so I decided to do something for myself and rekindle my love of the mind/body exercise regime known as Pilates. Teaching Pilates also gave me the chance to involve myself in the local community. I hadn’t made any new friends since relocating up here so starting exercise classes was the perfect excuse to do what I love and meet the neighbours.

I had fallen in love with Pilates after my daughter was born by caesarean section in 2003. After the operation I suffered horrendous back ache which I discovered was a result of having my stomach muscles cut. I was helped on the road to recovery by an amazing Pilates instructor and because I had taught ballet for 20 years in the UK, I was encouraged to teach Pilates.

I studied mat Pilates and qualified as an instructor with a passion for teaching not only Pilates exercises but also Joseph Pilates beliefs and principles. Joseph Pilates was born at the height of the Industrial Revolution and was a gymnast and body builder fascinated by anatomy and physiology. He concluded that the “Modern Age” with all its new inventions, automobiles and huge belching factories was creating a generation of people with poor health, dreadful posture and lazy bodies. He believed that healthy exercise was the key to longevity.

“If your spine is inflexibly stiff at 30, you are old; if it is completely flexible at 60, you are young” and I wholeheartedly agree. Movement is the key to staying mobile in our later years. Pilates helps with balance, co-ordination and weight bearing all of which we learn as a child but then sadly lose as we age.

Mat exercises involve co-ordinating breath with movement and teach you how to strengthen your core muscles which can alleviate lower back pain and assist poor posture. Pilates also encourages flexibility in the spine and mobility in the joints which makes it the perfect exercise regime for all ages, men and women alike. If practised regularly, Pilates will make a difference to your mind, body and overall wellbeing. It’s worth a try.

So, despite the dust, the heat, the fires and the lack of rain, I can honestly say that living here on a farm with my diamond in the rough husband has made me the happiest version of myself. Farm life is my best life. I’ll readily admit its bloody tough at times and I’ve never cried so much as when we had to shoot my favourite calf after he was attacked by wild dogs, or just last week when I nursed a dying calf born prematurely due to the heat.

But I have learnt two important lessons – what doesn’t kill you makes you stronger and it will rain again.

I no longer have time for manicures, ladies’ lunches or shopping days at the mall, but I wouldn’t swap this life. I’ve gone from Jimmy Choos to cowgirl boots, designer dresses to denim jeans and there is nothing I love better than having coffee with my pet cows.