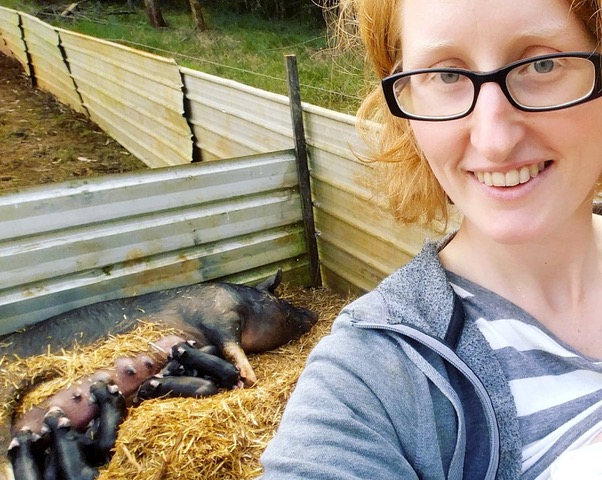 Recently, pig farmers and butchers across the Mid North Coast received less than 24 hours’ notice that Eversons Food Processors in Frederickton would no longer be processing pigs. Although a handful of the bigger producers in the area had their suspicions that this was coming, many smaller producers were taken by surprise. Regardless of size, pig farms in the region are suddenly left with few options; commit to much further transport and the many challenges that brings, or call it quits.

The next closest pig abattoirs are located in Booyong and Picton – each approximately 5 hours’ drive for many local producers, and for some even further. This increased distance will be more stressful on the animals, more difficult for farmers to coordinate, and more expensive. Many producers (farmers and butchers alike) will have no choice but to pass on these increased expenses to their customers, at a time when consumers are already tempted to reach for the cheaper imported pork products over the more expensive (yet, many would argue, higher quality) locally-produced pork. At a time when farmers are already struggling with the impacts of the ongoing drought, this could well be the straw that breaks the camel’s back – it may prove impossible for pig farmers on the Mid North Coast to continue running their farms.

Eversons have declared to farmers that the reason for this decision was due to cross-contamination of pork in their meat meal, a waste product of processing that they are able to sell, which is of more value to their business than pig processing. They tried but were unable to meet the demand for pork-free meat meal, so the pigs had to go. Unfortunately, this is part of a wider trend of abattoirs across Australia limiting business. Several abattoirs have stopped pig processing, some have turned away small producers as they focus on the export market, others have closed down entirely. This scenario highlights the progressive weakening of Australia’s local food security, as consumers and corporations alike push for cheaper and cheaper food whilst our farmers struggle with the higher cost of production during unprecedented drought.

Without local food security, Australia will rely more on imported (often factory-farmed) foods, and our farmers will stop farming our land. I’m sure just about everyone would agree that this is not desirable; we need to come together to work out how to prevent this outcome. We need to take local food security seriously. A push for local food security could provide a solution for the immediate crisis amongst the region’s pork producers, by way of a local small species micro abattoir catering to small-scale farmers across the Mid North Coast. This could also have scope to support local small-scale farmers of other small species (sheep, poultry), and would encourage an increase in local food production as there is less risk in beginning an enterprise which is actively supported by the local community. Many of the pork producers in our region hit hardest by the lack of a local abattoir, and many of those who could benefit from a micro abattoir, will be small-scale farmers managing their land holistically and regeneratively. These are not farms we can afford to lose.

Full disclosure: I am one of these small-scale regenerative pig farmers, selling pork from my organic-in-conversion pigs to customers in the local area. I also run a farmstay, through which I seize every possible opportunity to educate consumers and motivate them to support local regenerative farmers. I had plans to run farm tours serving the same purpose – but this, along with the rest of my farm and business, is currently looking very shaky. There has been some discussion amongst local pork producers about setting up a micro abattoir in the region, a minimum 12-18 month project. I am committed to helping this happen, and doing everything in my power to stay in business whilst it gets up and running. From where I stand, this is the only way to secure a future for local pork production.

So where do we go from here?

Our local growers are currently looking into other options for the future of Mid-North Coast pork, but options are looking pretty thin on the ground. Both micro abattoirs and mobile abattoirs are being considered but these are options that would take 12-18 months to get up off the ground and come with a host of cost, logistics, and viability hurdles.

What will our local pig farmers do in the mean time?

The bigger picture thing is… regulation change. This is what I feel needs to happen; pushing for regulation change around on-farm slaughter. Wild game can be legally harvested and sold commercially without a processing facility, but small livestock farmers don’t have this same freedom. As long as the person harvesting is a certified game inspector (similar to meat inspector), the carcass is eviscerated promptly and moved to an approved cool room within 2 hours, it’s okay to sell commercially. We can absolutely achieve that on small farms! And if we can make this regulation change happen, to allow on-farm free range slaughter following the same standards as the game industry, then it completely dissolves the need for micro abattoirs (overcoming the prohibitive cost/logistics/viability hurdles). It could guarantee food security for every community and every small-scale livestock producer around Australia in an instant.

None of this can happen without your help. As consumers, if you value local food production on a philosophical level, you must show that support when it comes to purchasing your groceries. That is step one. It is an incredibly daunting task for the pig farmers of the Mid North Coast to battle against all odds trying to continue producing high quality local pork, without support in spades from our local community. Step two, reach out to your local representatives. Micro abattoirs are expensive to set up, and are surrounded by red tape and regulations designed for huge abattoirs which operate on a completely different risk level. We need funding, and we need regulation change regarding micro abattoirs or on-farm processing for small producers, to make them easier and cheaper to set up so that they will be embraced in farming communities across Australia. Our representatives need to hear that their constituents are concerned about local food security and the fate of their local farmers. With your help, we can turn this challenge into an enormous success story for local food security on the Mid North Coast and in communities across Australia.

Sarah is a first-generation female farmer and manager of Homemade Healthy Happy Farm & Farmstay, a small-scale, ethical, organic-in-conversion pastured pig farm on the MidNorth Coast. She also runs a farmstay cottage on the farm, providing consumers with a farm-to-table food connection, inspiring support for local farmers.

Perhaps Midcoast Council as part of the Hunter Joint Regional Organisation should be looking into setting up a mobile abattoir or even a small animal abattoir to assist our struggling small acre farmers.

Or perhaps, our Federal Member, Dr David Gillespie, should look into some of that drought funding recently announced by his Government, after all if they can build a toilet in a cemetery out of drought relief funding, something his colleague and Minister for Water, David Littleproud recently defended with great confidence, then surely something like a small animal abattoir, or a mobile abattoir that is so needed and is so practical, is worthy of a government grant.

Here on the Mid North Coast we have many small acre farms that could be far more productive if the regulations and the incentives were created. Under the spectre of Climate Change we will need to look seriously at how we produce quality food going forward. In the United States, many farmers such as Joel Salatin from Polyface Farms (http://www.polyfacefarms.com), have proven that you can earn a decent income from small acreage farming. And isn’t it encouraging that there is a corps of young farmers such as Sarah Groom and others (some of whom we will feature in the new year), that are prepared to take on the challenges of modern day farming with intelligent and practical solutions.