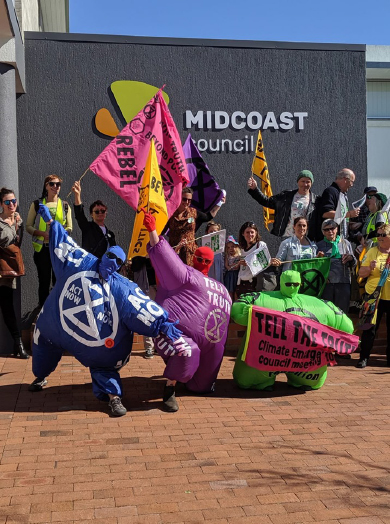 If you hadn’t heard of Extinction Rebellion a few weeks ago, chances are that you have by now.

Extinction Rebellion (often abbreviated to XR) has almost become a household phrase following the intense media coverage of the November “Spring Rebellion” by XR participants in cities around the world, including here in Australia.

Extinction Rebellion first appeared in the UK in October last year when thousands of Londoners occupied various city landmarks, closing off Oxford Circus and several Thames bridges for several days, leading to the UK Parliament declaring a Climate Emergency earlier this year. From those initial “actions” the XR movement spread rapidly across the globe with branches forming in Australia in early 2019. Having grown up in London in the sixties and having been an environmental activist in Australia for nearly fifty years I was particularly impressed be the philosophy and practices of XR.

XR have three demands of governments at all levels; commonwealth, state and local. Firstly, that governments “tell the truth” about the existential threats from both climate change and ecological collapse, by declaring a “climate and ecological emergency” and working with other institutions to communicate the urgency for change.

XR recognises that traditional methods of protest such as lobbying and letter writing have done little to slow the insidious march towards extinction.  If we continue to ignore the science, we will experience an unprecedented level of disruption within our lifetimes. We are already facing floods, wildfires, extreme weather and crop failure and we can look to mass migration and even the breakdown of society. We are in the midst of the sixth mass extinction, with about 200 species becoming extinct each day. The iconic XR symbol of a stylised hourglass inside a globe is designed to show that time is rapidly running out for the earth unless we change our ways, it tells us that “business as usual is not an option.”

XR believe that it will only be by civil disobedience, including non-violent direct action, disruption and mass arrests, that sufficient public attention will be drawn to the crises thereby forcing governments to act. To complement such civil disobedience XR has developed ten key “principles” which include; having a shared vision of change – creating a world that is fit for generations to come; creating a culture which is healthy, resilient and adaptable; valuing reflection and learning, being welcoming and inclusive, breaking down hierarchies of power for more equitable participation; avoiding blaming and shaming and utilising autonomy and decentralisation and using non-violent strategies and tactics as the most effective way to bring about change. Anyone who follows these core principles and values can take action in the name of Extinction Rebellion. XR research shows that it will only require about 3.5% of the population engaging in XR activities to bring the required transformation.

Having spent decades campaigning for the protection of forests and biodiversity, opposing coal seam gas and inappropriate mining whilst working on conservation projects, I took it upon myself to initiate a formation meeting in late May this year to create a local “chapter” and Extinction Rebellion MidCoast (XRMC) was born.

The structure of XRMC is based on the structure of XR United Kingdom which includes a Constitution and operational guidelines based on a “holacracy” – a method of decentralised management and organisational governance, where authority and decision-making are distributed throughout a range of self-organising Working Group teams rather than being vested in a hierarchy. XRMC has no members and no leaders, only supporters and spokespeople. When we stand shoulder to shoulder we are all leaders.

One of the first actions of XRMC was to write a letter to MidCoast Council – our local government body – demanding council declare a Climate and Ecological Emergency in keeping with the three key XR demands. The delivery of the letter was accompanied by a colourful street parade and the presentation of the letter to council staff was by appropriately dressed “guardian angels.”

Almost 70 Australian councils have declared a Climate Emergency and last month’s Local Government Conference passed a similar resolution. At the recent MidCoast Council meeting in Gloucester a motion went part way to meeting XRMC’s demands, but it failed to acknowledge the ecological crisis.  XRMC will continue to bring pressure to bear on Mid CoastCouncil until they also declare an ecological emergency.

The role of XRMC is to educate the public about the climate and ecological emergencies and to equip members of the public who wish to take action in the name of Extinction Rebellion with the required awareness and skills of non-violent behaviour in the face of intimidation and provocation.

Many of the detractors of Extinction Rebellion accuse us of hypocrisy because we drive cars, use mobile phones and live in wooden houses. They are right. Every one of us is complicit in the high carbon lifestyles that create huge carbon footprints and contribute to biodiversity loss. We are involuntarily stuck in this fossil-fuel economy and without systemic change, our lifestyles will keep on causing climate and ecological harm. However, the difference between us and our attackers is that we accept the science of human induced climate change and ecological breakdown, whereas our opponents do not.

Chris Sheed has been an environmental activist for decades and received an Order of Australia for services to conservation and the protection of old growth forests.