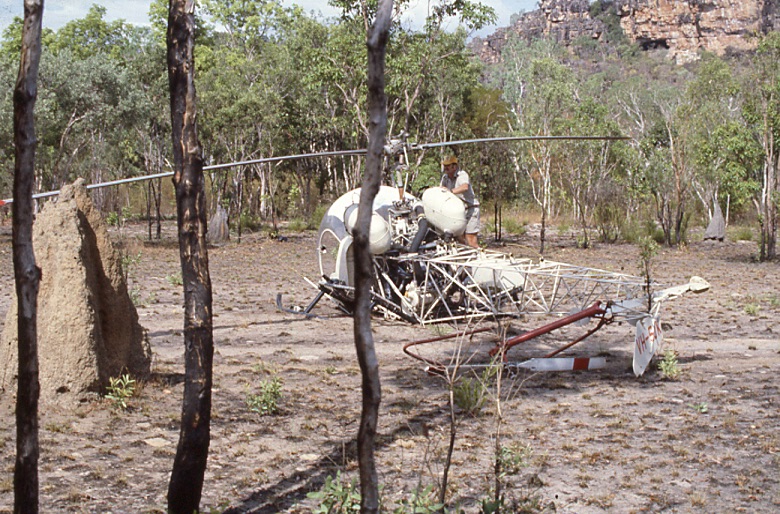 FOLLOWING OUR STORY LAST MONTH ON BORIS’S HELICOPTER CRASH ON TOP OF AYER’S ROCK, LOCAL RESIDENT, JIM FRAZIER, CAMERAMAN FOR DAVID ATTENBOROUGH FOR MANY YEARS AND WHO IS KNOWN WORLDWIDE FOR INVENTING A UNIQUE CLOSE UP CAMERA LENS, HIS LATE PARTNER, NATURALIST DENSYE CLYNE, WROTE OF THEIR

Crossroads of the Alligators

When the engine of our helicopter stalls, we are skirting the edge of a 300m high precipice in the Arnhem plateau of the Northern Territory.  I don’t really have time to think or feel; everything happens so quickly.

Cough, splutter, cough. . . . the chopper bucks a bit and we are banking steeply heading down towards dense bush and possibly a crocodile-infested river.  Our pilot, Ray, says “Ah–h-h-!”   Jim Frazier and I say nothing.  Jim tells me later he is petrified, his whole life flashes before him.  Mine doesn’t.  I have always believed that in an emergency your helicopter simply floats you down to safely.  But not this time.  My faith in helicopters is now compromised.

Below us there is only one treeless space visible and our pilot finds it.  We clip the top of a tree, slowing us down a fraction before we hit the ground. We land bucking and skewing, breaking the left hand skid and landing at an angle. The main rotor blades flex down and cut into the tail rotor.  The impact splits one of the fuel tanks open.  Petrol pours out just missing the hot engine.  We spin around erratically before finally coming to rest.  Ray yells “GET OUT! GET OUT!”  I yell for Jim to undo his seat belt.  I’m stuck between the two men, Jim on the high side.

“Keep your heads down!” shouts Ray as we tumble out and run.   There is noise and dust and the main rotors are still going round, chopping away at a small unfortunate tree.  Jim and I still have our cameras slung round our necks when we get out.  With great presence of mind Jim runs backwards, crouching, legs buckling, taking shaky shots.

We have landed relatively safely in a small clearing next to a dry sandy creek bed.  Down amongst sandstone boulders, uninhabited bushland and rushing rivers, it could have been so much worse.

The danger of fire now over Ray goes carefully back to the helicopter and takes from it the seat cushions, water container, emergency kit and our camera bags.  He sets up an emergency radio beacon on top of the chopper and puts a message on the ground with sticks: ALL OK.   He tells us the radio is on the blink – repeated mayday calls get no response though voices can be heard.  Ray makes a fire to signal our whereabouts.  He thinks we’re sure to be rescued before nightfall.  I’m not so sure.

We take our things to the sandy creek bed where it’s cooler.  It’s 4 pm, hottest time of day in an Australian tropical summer and water is my first concern.  There is a half full can of drinking water in the emergency pack.  Enough?  Who knows how long we’ll be here.  I explore the creek bed but find no pools.  Just before dark I walk along the vehicle track which cuts across an upper arm of the creek.  Buffalos are a feral pest in Arnhem land and I find a buffalo wallow; thick, yellow brown and smelly.  Fortunately no buffaloes.  If the worse comes to the worst we can dig in the sand near the wallow and perhaps find clean water.  In the meantime we make ourselves as comfortable as possible and reflect on our situation.

It is November 1982.  At the BBC’s expense, cameraman Jim Frazier and I are doing a recce for a documentary I have proposed about the region’s wildlife.  The title Crossroads of the Alligators is based on the two branches of the Alligator Rivers that cross the eroded land below the ancient escarpment plateau.  A major theme will be the crocodiles after which the rivers are misnamed (alligators are distant American relatives).  There are no crocs here today; they will turn up later in the story.

We had chartered a Jet Ranger helicopter with 5 seats so we could take a local wildlife expert with us. What we get is a “bubble” – a Bell 47 with room for only two passengers and capable of half the range.  We decided to go ahead.

So for several hours we followed the East Alligator River looking for possible camping sites for two periods, the end of the Wet and the end of the Dry.  We set down in three places but because of the limited range of the Bell we have to go back to Jabiru township twice to refuel.   Second time back the engine won’t start.  Ray borrows a battery starter from the Uranium Aerial Search people who have their survey plane at the airstrip.  Then back to the escarpment for a last recce.  It is later en route home to our base at Kakadu National Park HQ that the crash happens.

It is getting dark and Jim and I settle down on the dry sand of the creek bed.  There is nothing we can do to help. We are in the hands of our intrepid pilot who has now been able to send out a mayday signal. We wait.

It is a warm, clear night, the stars are magnificent – we make the best of the situation, or pretend to, lying on our backs and counting shooting stars in a night sky stunningly unpolluted by city lights.  Time goes by.  Suddenly Jim sits up, excited.  He points to a speck of light far, far above us “That’s not a star,” he says, “Look, it’s a plane, and it’s criss-crossing us!” Yes, I see it.  A tiny light moving across and back and across again.

And I hear it.  I’ll never forget the drone of that little plane.  It keeps us company, descending in a spiral around us, pinpointing our position.  Ray is on the radio.  We hurry to join him at the helicopter. “I’ve talked to the pilot,” he says, “They’re sending a truck out from the Pan Continental mining camp at Jabiluka.  I’ve told him I have only one flare left.” The radio crackles: “They’re about 15 minutes away from you.  Fifteen minutes – then set off a flare.”  It is only ten minutes before we hear a vehicle approaching.  Our flare lights up the trees and a big truck crashes out of the bush and stops – a lean figure with wild black hair leaps out, lifts me up in a big hug: “You’re OK now darlin’. ”  And so we all are.

The second vehicle brings the police from Kakadu, bearing a tray of cold drinks.  We drink and smile our thanks.  We are driven back to our base at Kakadu National Park HQ around midnight for a meal and then blessed bed.  Next morning we hear the full story of our rescue.  It seems that an international airliner on its way to Singapore just happened to pick up our mayday signal.  Darwin Airport is alerted.   A plane is sent up to search for us.  But not just any plane – after all it is night time. No, it is the very same Uranium Research plane we had seen that day at Jabiru Airstrip, equipped to find minerals and metals, perfect for a night-time search for a downed helicopter!   This was the ‘shooting star’ we had watched coming to our rescue.  The police had meanwhile been in touch with the Pan Continental Mines people to organise a ground search, and guided by the flashing landing lights of the circling plane and our flare they found us around 11 pm.

The washup… pilot saved from being fined and penalised for not checking the fuel, saved by the photo Jim took of him doing just that at Jabiru. Why did they not come straight away..???

(Jim Frazier is working on an environmental film/music project, ‘Symphony of the Earth.’)