A Memorial for the whole of New South Wales 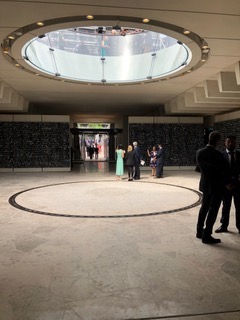 Bernadette Foley takes a special tour of a special memorial

In recognition of Anzac Day this month, let me tell you of a walk I took recently through the striking new additions to the Anzac Memorial, New South Wales’ most important and prominent monument to the men and women who served in the wars. My guide was Philip Thalis, architect, City of Sydney Councillor and member of the Board of Trustees for the Anzac Memorial representing the Lord Mayor of Sydney. Built on the north–south axis in Sydney’s Hyde Park, this elegant and dignified granite building is a significant memorial for citizens across the state. Philip said, ‘The Anzac Memorial, particularly with the new extension, is a monument to the service by all the people of New South Wales over two centuries. And so that makes it incredibly rare and incredibly important for the whole state and not just for this place in the middle of Hyde Park.’

The Art Deco memorial, opened in 1934, was designed by Sydney architect, Bruce Dellit, working in collaboration with sculptor Raynor Hoff, who was teaching at the East Sydney Technical College. This union of architecture and art created a sculptural monument that is not a celebration of war but a recognition of the service and sacrifices regular people make in times of war. The Hall of Memory is the heart of the structure, with the Pool of Reflection to the north. Dellit’s original scheme also included a series of cascading water features leading down towards Liverpool Street, to the south. This powerful feature has at last been built as part of the Centenary Project, commemorating the 100th anniversary of the First World War, and completed in 2018. The Project realised Dellit’s plans and created new spaces as well, designed by the distinguished architect, Professor Richard Johnson, and his colleagues at Johnson Pilton Walker in collaboration with the NSW Office of the Government Architect. Like Dellit’s fruitful collaboration with Hoff, Johnson worked with artist Fiona Hall and together they created the Hall of Service.

Initially, the idea of completing Dellit’s plans was controversial as it meant building on park land. On this point Philip said, ‘The designers have reached an incredibly respectful balance between the public space of the park and not glorifying war but actually keeping the tradition of the original building, which is all about respect for the fallen and the service they gave. In fact, its main sculpture is called “Sacrifice”. The building recognises the roles of not only all the people who were fighting, but others who served in the war, such as the nurses. It was rare in a war memorial to have statues of the women, as we see in the Anzac Memorial.’

We walked alongside the Pool of Reflection, past the Art Deco building, looking up at the corner statues of service men and women designed by Hoff, and around to the top of the cascades. There we stopped at a circular opening – the oculus – and stared down. The rush of emotion I felt took me completely by surprise. Leaning our arms against the railing, we peered down into the Hall of Service and saw its four walls lined with small circles of colour. Staring closer, I realised they were glass containers holding sand or soil and alongside each one was the name of a New South Wales town where the soil came from. The large number of these samples – 1701 in all – and knowing that they came from the home towns of those who enlisted in World War One was extraordinarily powerful. Inside, the room was lit from above by the oculus and in the centre, under our feet, was a wide stone-paved circle surrounded by a hundred soil samples from theatres of war in which Australians have served. The work in this Hall is Fiona Hall’s extraordinary sculpture that commemorates the service of so many men and women from around the state.

‘Determining which were the hundred most important campaigns was done through an exhaustive process with a lot of military historians and other historians. And then people were asked to get soil from the hundred places around the globe. This was a major endeavour involving Australian embassies worldwide,’ Philip explained. ‘The soils from around New South Wales were collected by school groups and communities, and there were ceremonies with school children and the mayors and different groups when the samples were given for the Anzac Memorial.

‘In this extraordinary array of samples from New South Wales and the soils from around the world, there is the idea of blood in the soil and in the ground.’

We read some of the place names next to the samples – Borenore in the Central West, Wingham, Tinonee and Taree, Potts Point in the inner city, and so many more.

‘And then there is the importance of this whole space,’ Philip said, ‘which is a great public room. It is both inside and outside and everything in between. It’s open to the sky so on some days we have the rain falling in, and the floor acts a drain, like the Pantheon in Rome. We’re actually outside here, because the oculus is open.’

We moved away from Hall of Service, which was full of people who were all respectfully silent, and walked into the corridor. Rooms for meetings, school activities and talks lined one wall. On the other side, in niches in the walls next to each doorway, we saw the the Plants of Remembrance – eight glass vases, each decorated with a delicate hand-etched plant. Fiona Hall selected the plants species for their association to the First World War: Flanders poppy (Papaver rhoeas); Aleppo pine (Pinus halepensis); Rosemary (Rosmarinus officinalis); Lombardy poplar (Populus nigra ‘Italica’); Gallipoli rose (Cistus salviifolius); and the Waratah (Telopea speciosissima).

Walking right around we came to the library and exhibition rooms. The collection on display was rich and diverse, and incredibly personal. Glancing at a photo of a young soldier or a well-worn nurse’s hat was enough to take my breath away as I wondered what happened to those people during the War.

Philip pointed out a cricket ball bowled by Albert ‘Tibby’ Cotter in 1904. When Cotter was killed in action the ball, which bears his signature was turned into a memorial to him. ‘It’s worth saying how skilled the people in the New South Wales government were who curated this collection; working behind the scenes they have an eye for detail, understand the need to protect these objects and memories, and have created this exhibition that brings events to life.’

At the display case filled with Rayner Hoff’s drawings of sculptures for the ANZAC Memorial, Philip mentioned that Hoff also designed the famous badge for Holden cars. Hoff was prolific until his late 30s and died at the age of 43.

You Need Time to See it

It would be easy to spend hours in the exhibition rooms, but we both had to go back to work. Philip and I had a quick look at the small but well-stocked book shop, then walked outside. It is remarkable how much the architects have fitted into the space underground, especially as the new extension does not interfere with the impact of the cascades at ground level.

‘In fact, I think it has significantly improved the relationship from Liverpool Street. It actually makes the Memorial much more part of the city,’ Philip says.

It is a memorial for everyone in New South Wales built on ‘a traditional gathering place for the Eora People and in Sydney’s oldest urban park’, to quote the architect Richard Johnson. This dignified structure and the sculptures on and in it, remind us of the sacrifices made in war without ever glorifying it. The Centenary Project – the new rooms, the Hall of Service and the flowing cascades – commentates and tells the stories of the men and women who served in all wars. It will help generations to come to remember them.