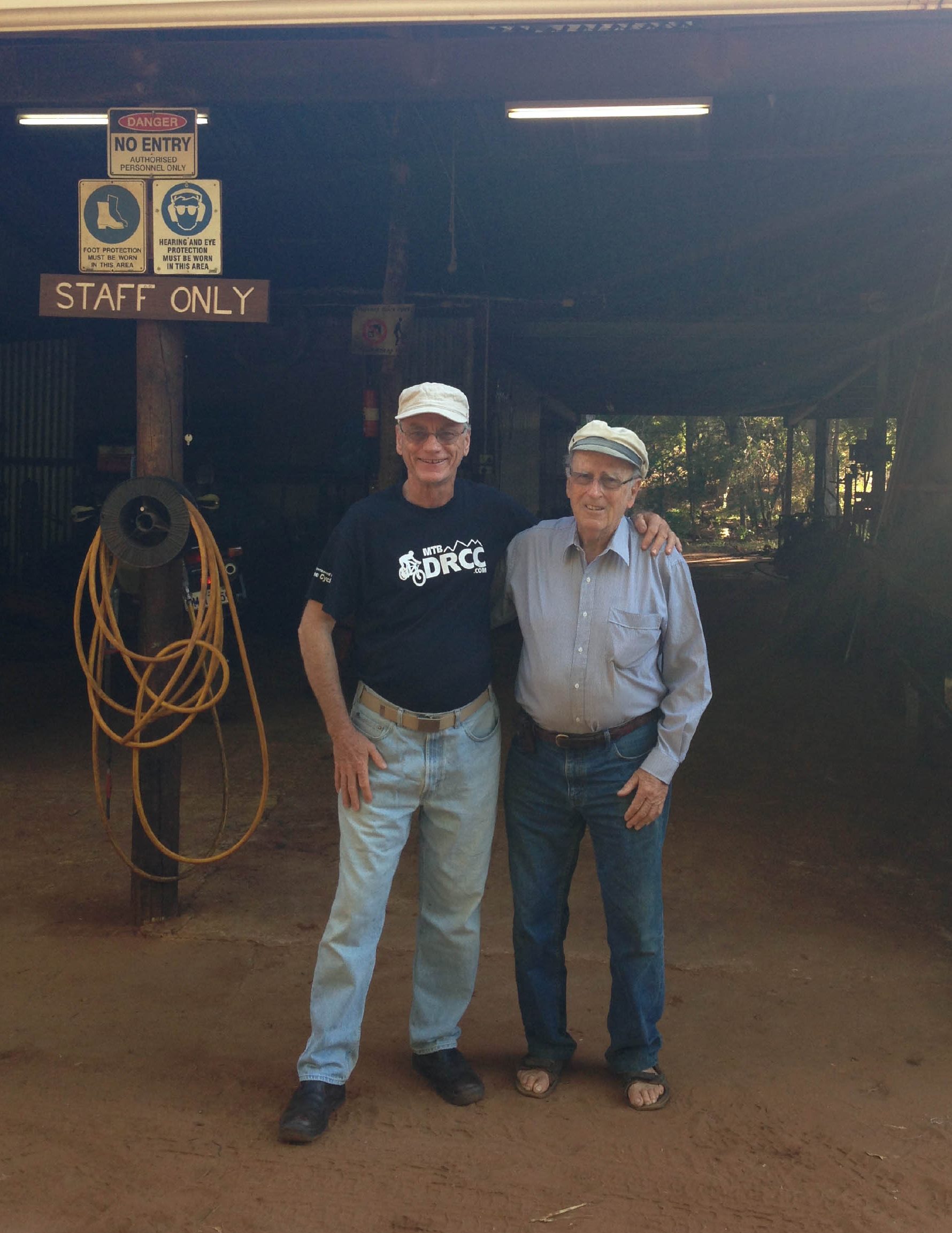 During the early 1970’s Warwick Finlay was working as a sound recordist assigned to the ABC’s top-shelf show,

“A Big Country.”  Here he reminisces about one
particular shoot.

It was my lot to travel around the country in the company of good crew members gathering interesting stories and having a fine time.

In 1971 we, (Terry Byrne, cameraman, Peter Davies, assistant cameraman and I) were assigned to reporter/producer Bob Connolly to travel to Broome to produce a yarn about the pearling industry.

Part of the story was to be shot at Cygnet Bay, in those days a rough journey from Broome of some 200kms kms and two days over very poor roads in a four-wheel drive of doubtful reliability.  After doing the sums and in consultation with our Sydney office, it was decided that we would charter an aircraft in and out of Cape Leveque and have the subject of our film, Lyndon Brown arrange a lift to his pearl farm.

A Cessna 206 with cargo pod was chartered and it was with some difficulty that we four plus pilot and equipment fitted into the aircraft. The technology was fairly bulky in those days and the ubiquitous tripod just wouldn’t fit in, so it meant a handheld camera for Terry, the master of innovation.

We were met at the Cape Leveque airstrip by a surly, tattooed type who informed us that he was Lyndon Brown’s lugger skipper, driving wise men from the East wasn’t on his duty statement and anyhow he’d rather be back in his shack drinking home brew. We elected Bob to be his passenger in the cab as we crew piled onto the back of the far from roadworthy decrepit Land Cruiser.

On arrival at the pearl farm, Bob and his new best mate rolled out of the cab laughing and full of bon ami. Such were the interpersonal skills of our reporter that he had won over the skipper and undying love and lifelong friendship were assured.

Not much happened for a while but as we took in our surroundings, we could see that we were firmly in the bush. Few signs of human habitation were evident except for an open work shed and a dwelling constructed from corrugated iron and paper bark. In a scene setting snapshot, I spied a whisp of smoke rising from a stove chimney. Out of the door emerged a tall man whose body language betrayed shyness but he came forward and introduced himself as Lyndon Brown.

As we followed Lyndon, it became evident that this was not a place of laughter but serious work, shrouded in secrecy with an emphasis on security. We were introduced to a Japanese woman who had the skills and the knowledge required to cultivate pearls. She was making wonderful odours come out of the stove with a tiny child at hip.

We were to camp in the shed and eat with Linden Brown.

This was not the time for sightseeing or the usual cup of tea. Straight into it we went. Bolting the equipment together we were transported to the lugger for our voyage. As a sailor, I was smitten by this classic boat, which smelt of things from the sea and made noises that, even today this old sound recordist can recall. Our skipper warmly welcomed us aboard, assuring us that the wind was just right for a nice cruise on Cygnet Bay.

The filming was difficult for Terrry, working without a tripod and hand-holding a large German camera. But you do what you do and we had a complete sequence of a working pearling lugger complete with bell divers, hoses and a harvest of oyster shells each measuring some 20 cms across.

All we required were some wide shots of the lugger from the land, so we went ashore, sent the vessel out again and Terry proceeded to grab some wonderful shots with the camera perched on a fence post.

The next sequence was a real eye-opener and something that had never been recorded on film due to the corporate secrecy covering pearl seeding.

We caught up with  in a ‘clean’ room in the shed where the Japanese lady opened the freshly harvested shells, held them ajar with wooden wedges and with a surgeon’s skill, cut the oyster mantle away and placed a tiny polystyrene ball in a secret spot. A polystyrene dome about 20mm x15 mm was araldited to the inside of the shell and the mother of pearl nacre would eventually cover this also. Loads of oyster meat was taken from some shells and we were informed that this was our dinner.

The seeded shells were placed on racks and submerged in fresh-flowing seawater for a speedy return to the growing area in the Bay.

After a fourteen-hour day, everyone was happy that we had earned our ‘keep’ and in fading light we joined the Brown in his one room home. The interior was rough; a swept, dirt floor, chinks of light entering through cracks, falling on smoke seeping from the Kookaburra combustion stove and the delicious smell of oyster chowder exciting the juices of a hungry crew. We sat around a large bush material table; lit by a pressure lamp on chairs constructed from flotsam and preceded to be served by the Lady of the house dressed in a kimono. It doesn’t get much better than this and the visual and olfactory overloads were too much to fully absorb.

The dinner was amazing with all senses on alert but you can only eat so much fresh oyster chowder.

The night, being young, opened itself to a game of poker. My loss is that I don’t play but I watched the group set up and do card things. At this time, our New Best Mate, The Skipper, turned up with a milk crate of  ‘tallies’ and I slipped outside to partake of the BEST home brew while the sun set over the ocean.

Some time later I returned inside to watch the game as I had been alerted by the noise of people having fun. The scene was extraordinary, like something out of a pirate’s movie; on the table was a huge tray of pearls, some natural, varying from black through fawns to silver but most cultured, descending from perfectly round through to grotesque hybrids, (known as baroque or keshi pearls which are now highly prized as technology has moved on to produce “perfect” rounds, so the wild natural pearls are rarer. Ed) all dazzling in the unique light. This was not a display, these were the poker chips and my mates were hording them like sharks guard their pups.

As it turned out, common sense prevailed and in the sober light of the next day Bob, Terry and Pete showed me their bounty of one or two nice pearls each.

I wasn’t forgotten. I bought a nice cultured specimen for a fair price and Lyndon proceeded to use a hole saw to cut out a domed (half round) pearl from shell he had lying around the place. These are now beautifully mounted and part of my wife’s jewellery treasures.

The Pearling Game was shown to an enthralled audience on ABC TV and we all went our separate ways.

My way was to eventually leave the ABC for the freelance world where I was to make an excellent living working with local and international clients recording sound around the world.

My clients included the BBC Natural History Unit who would commission me each time they were filming in Australia.

In 2013 I decided to retire after just one more job and the BBC provided me with such a swan song. They were making a series called Treasure Hunt where they looked at diamonds in South Africa, gold in Peru and opal and pearls in Australia.

Now, I’m a guy who’s been kissed by an Angel and in my career I’ve been lucky enough to visit places people pay to go to….. often twice. Here it was happening again; I was to fly to Broome, team up with an English crew, lead them by road to Cygnet Bay and record the sound.

As I drove the lead four-wheel drive with the jet-lagged English folk following my tail in the dust, I mused over what I would find at a place I visited some 42 years ago.

Wow! It’s a resort now with a pool, nice steps, a boutique, professional greeters and an old, open shed.

The cool, charismatic head-of-the-whole-shooting-match (nephew of Lydon), James Brown made us feel welcome with a cool drink from the bar. During introductions he looked me square in the eye and said, “You’re famous around here, you know”! It’s not the done thing for the hired sound recordist to steal the show, especially when there’s an English TV presenter being completely ignored. “Yes,” James continued, “whenever guests arrive, we show them this old TV program and everyday our staff see your credit.”

Things settled down a bit and the presenter went off for a swim in the crocodile infested waters of tidal Cygnet Bay…sheesh.

Afterwards, quietly James told me he would introduce me to Lyndon who was still living at the farm.

As you do, I found Lyndon shuffling along a nearby road and introduced myself. The eyes of this still shy man lit up and we had a yarn in the open shed.

We looked at the drill press, the same pile of shell, the (now) superseded clean room, checked out the old VCR playing our documentary and took some shots.

The hardships Lyndon and his family went through were sufficient as he is a now comfortably off….but seems to be on his own, and very content at how far he’s come.