The community calls out council… “WE’RE FED UP” 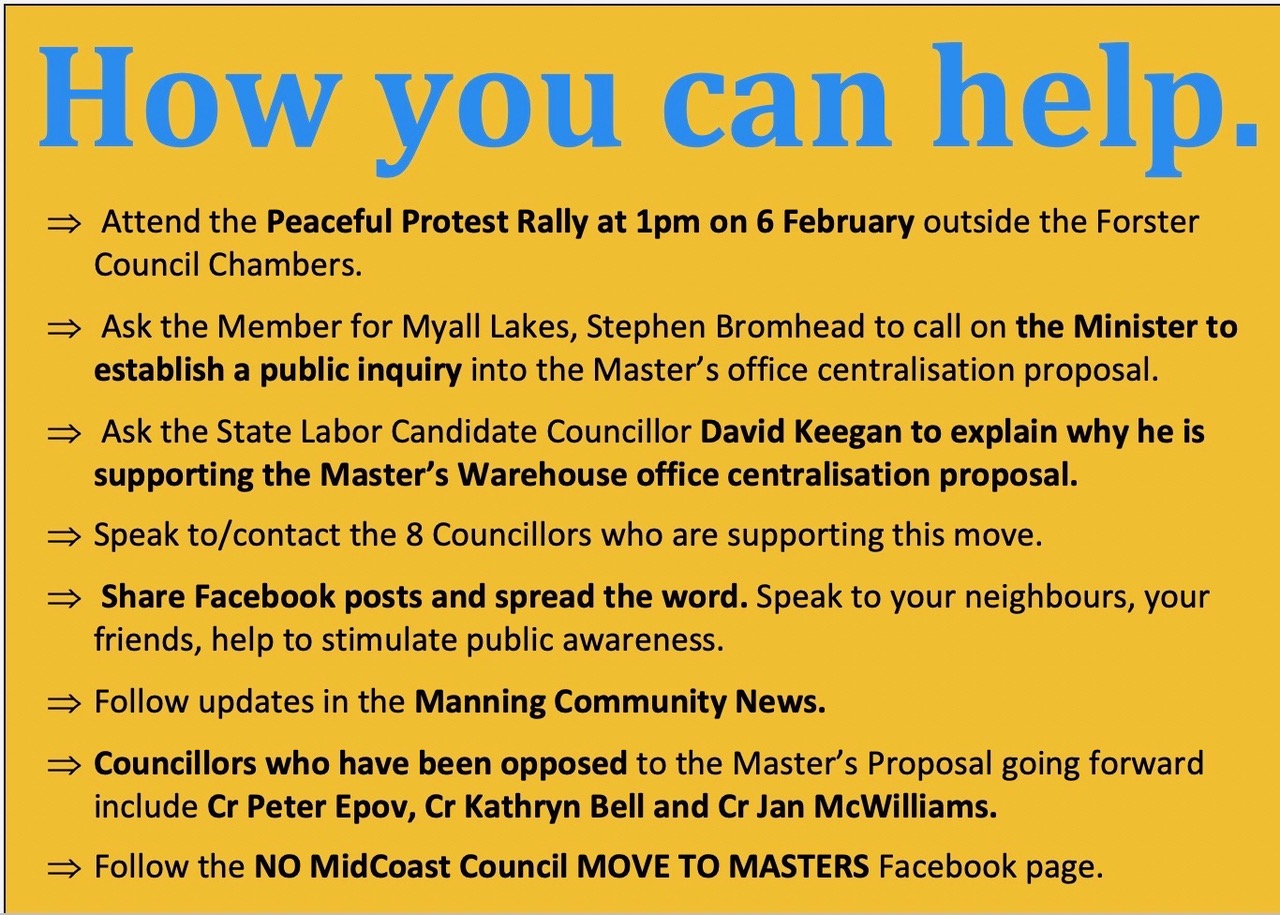 The “No Move to Masters” campaign has become a catalyst for the community to call a halt to what they see as MidCoast Council’s arrogance and waste of significant money on monstrous, unwanted projects.

The brain snap of former GM Glenn Handford to buy the deserted Masters Building with no community or councillors’ consultation, and no clear idea what to do with it, except gazump a legitimate business plan by an out of town company (Midcoast Trucks)  to set up shop and employ locals, has left MidCoast Council with a white elephant and egg on its face.

Not that the coterie of decision makers and majority of councillors who backed the plan, see it that way.

The majority of council staff are miserable and angry, especially staff south of Forster who don’t want to travel the extra distance to Taree even if they do get travel compensation. For staff who possibly don’t drive or don’t own a car, they will be unable to get to work, and where does that leave their mortgage payments?

Some claim businesses in Forster are and Taree who rely on Council staff spending will take a big hit.

Several Facebook pages, and a petition, gathered two thousand names from those against the Move to Masters plan.

Donors have come forward to fund a TV and cinema media blitz.

Groups of concerned citizens have sought professional financial advice on how Council’s figures stack up re the costs for the whole shebang.

There is a bridge too far between Council’s estimated costs and that of the “conservative” forty million dollars and rising, estimated by qualified professionals in the public arena.

And speaking of bridges. . .

Whatever happened to Council’s idea of splashing 20 million dollars on the Cedar Party Bridge and Replacement Wingham Memorial pool?

Replacement – Stage 1 Investigation, Feasibility & Design” in 2016 just after the GTCC Council was abolished.

Then in 2017 the amalgamated MidCoast Council started a so-called public consultation and commissioned the design for a $20million concrete monstrosity, despite community outrage and lack of consultation. This meant a new pool location would have to be found and a new pool complex built – causing anguish in the community.

This would also obviously include paying for a new design for a new scaled down bridge that would cost several hundred thousand dollars or more for the design which would now come from ratepayers.

Council tried to buy the Wingham Bowling Club causing further anguish in the community and among the Club’s membership.

The  quickly formed Save Our Pool Group supported by the Manning Alliance gathered over 3000 signatures on a petition – that’s ninety percent of the voting residents of Wingham. Yet Council ignored this and the then Administrator went ahead with the 20 million dollar replacement plan.

The community was told that the Government would fund a new Pool Complex if they provided grant funding for the Bridge – well it’s not happening. So Council has spent  $350,000 on a design which will, or could be, mothballed, and then have to pay for a new design from ratepayers money this time around for a more modest bridge, if it needs to be replaced. And if it doesn’t need to be replaced why did they lie to the community and cause all the anguish and trauma within the community to begin with? Who really pushed for a new bridge?

The community was told the bridge was falling apart and need to be urgently replaced. Two years later there is no sign of the bridge and council has failed to receive a grant in the most recent round of ‘Fixing Country Roads’ Grants that were announced late last year.

The keen and devoted users of the pool, including the Wingham Swimming Club, are very concerned about its future.

This is yet another example, like the move to Masters, of Council bulldozing secretive plans through without community consultation, and thus failing in the process and costing ratepayers yet again.

When will the arrogance of some Council bureaucrats see the light and include the public, who foot the bills, in discussions and real and honest consultation and airing of opinions and ideas?

Is it any wonder that by keeping plans and ideas behind closed doors, some senior Council people, plus the blatant and allegedly dishonest actions of some past staff, cause the rift between Them and Us.

It becomes a real issue when people openly mock the Council – all confidence and credibility is lost.

The first mob that practices genuine community engagement in a frank and transparent manner, will win the day and move us forward.

Bring on the elections. Fresh blood is needed. We have people on Council who know how to work the system to get elected, but have no agenda and no idea of what to do when they get onto Council.

So far it ain’t looking too encouraging. But in 18 months time…look out…