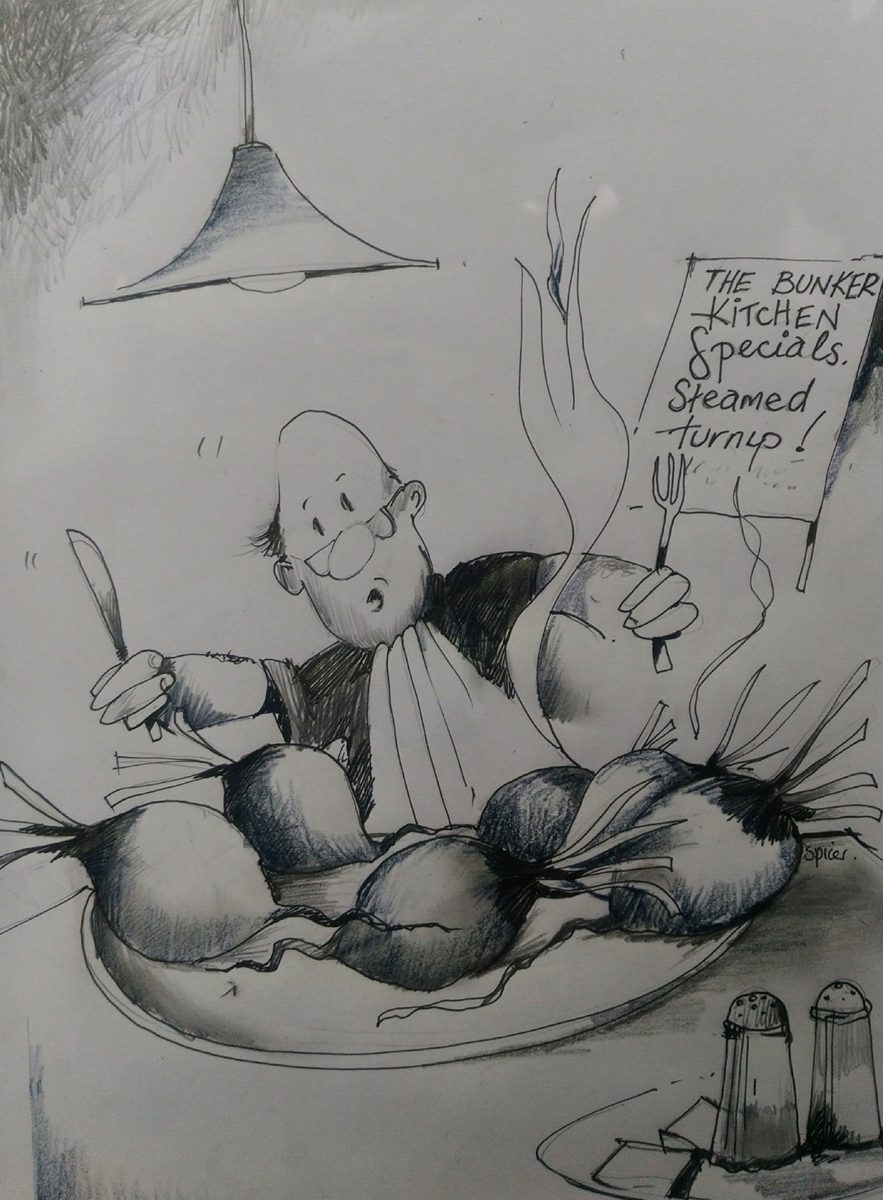 We’re starting a new column which takes a light-hearted look at life as it is lived in the 21st century from inside a retirement home.

It’s called From the Bunker and is written by veteran journalist and playwright Mick Barnes.

The column centres around a stumble-bum secret agent, known as 001 whose first assignment is to work undercover in an old age facility named the Pearly Gates Dormitory Retreat.

Barnes started writing the column after reading a story in Good Weekend magazine by Richard Roe about living in an aged care home.

“The article was both poignant and humorous,” he said, “full of rich material for satire. So, I’ve invented a character, named 001, who is much closer to Maxwell Smart than James Bond.”

Inside the Pearly Gates

I don’t want to seem like a whinger, Chief, but you weren’t kidding when you said this would be a dangerous, difficult and testing assignment. It’s okay, I got through their checkpoints, as you predicted I would. They accepted that I was a 99-year-old deaf cripple mutant with chronic emphysema, lumbago, a dicky heart, livid liver, gastric stomach and one arm shorter than the other.

Or rather, they accepted with some amendment that that was me. It’s not easy to get into an old folk’s home these days.

Why didn’t you brief me on what a mutant is? In all innocence, I thought a mutant was someone who had lost the power of speech. I spent half an hour making deep guttural sounds like an angry gorilla as the medicos hurled question after impertinent question at me. I kept pointing at my throat. Pathetically. Finally, they crossed out “deaf cripple mutant” and replaced it with “idiot’.

I looked up mutant in the dictionary at first opportunity and it told me I’m a plant or animal organism differing from my parents in one or more characteristics that are inheritable. Doesn’t that describe just about everyone? My father was a Liberal voter, for crying out loud; I wouldn’t vote for the bastards if you paid me in gold ingots. My mother was a buckjump rider. I used to fall off my tricycle when I was a three-year-old.

Most of us progeny believe it’s our bounden duty to differ from our parents. That’s only as it should be. That is how the world has developed from the messy smelly nauseating putrid swamp of pre-history to today’s sophisticated high-tech fine-tuned dynamic engine for ruining the environment, enriching the rich, impoverishing the poor and returning the planet to the swamp of post-history. If it were not so, wouldn’t we all still be simple single cell organisms or Donald Trumps? Didn’t the President himself recently indicate that the world was back-sliding towards the primordial soup when he said “My gut tells me more than anyone else’s brain can.”  Here, we have the President of the United States openly admitting his cognitive powers had taken a seismic shift from mind to body; it’s surely only a matter of time before that the body reverts to something like a jelly fish with no brain, only an instinct for survival.

Sorry, Chief, I didn’t mean to go into such a rant. This place gets to you after a while. There’s a woman who sits opposite me at meal times who thinks she’s some sort of machine. Other residents say she hasn’t spoken a recognisable word for seven months. She uses her eyebrows to communicate in Morse code, raising and lowering them quickly or slowly for dots and dashes. The kitchen staff have all had to learn Morse to feed her. She hasn’t twigged yet that I’m trained in code. I’m just waiting for the moment she has a shot at me.  I’ll hit her with a barrage of the most offensive Morse I can think of …

Anyway, That’s just between you and me, Chief. It’s not part of my official report, which follows …

Sirs, I have to report that Bunker 001, known as the Pearly Gates Dormitory Retreat has been successfully infiltrated. Agent 001 is installed as a client/resident/patient/inmate in Room 75 and has been accepted for all intents and purposes as a genuine silly old bugger.

Lines of communication between 001 and Chief have been established. If 001 needs to make urgent contact without raising suspicion, he tweets “Turnip for dinner tonight. Yuck!” In case of dire emergency, he uses a two-word alert “Turnip sux”.

001 reports: While I am acutely aware that the purpose of this assignment is to track down and report on any dissident residents of Pearly Gates who might hold opinions or attitudes contrary to Government policy, I must point out the difficulties intrinsic to this exercise. All residents of this establishment are known only by their first (given) names.  Some of them have forgotten they have another name. Some of them have forgotten all their names. To be frank, there is widespread apathy about names, either personal or professional or historic or geographic and a brooding contempt for the Government and, in fact for anything you might like to name … e.g. rhubarb, modern music, modern fashions, lawyers, families, shepherd’s pie, modern haircuts, hats, all Australian prime ministers of the past 20 years, mincemeat, television, Lady Gaga, nurses and doctors, yoga … you get the picture? Everything!

Identification is a looming problem. I’m not privy to official policy regarding this establishment but if, for instance, Pearly Gates is being considered for dissident cleansing, we  confront a gigantic task. Fifteen inmates here answer to the name John. Several of these Johns have been incarcerated multiple years; they all use walking frames and employ them as battering rams if annoyed. They have grown so alike in looks, manner, attitude, political views and prejudices that staff here frequently can’t tell them apart. Nor can some family members. Recently, the sister of one of these Johns spoke for an hour on visiting day to the wrong John without realising her mistake. She left him a fruit cake, a gesture that provoked an undignified melee when the genuine John found out.

You can appreciate the scale of the dilemma when I report that, apart from the overload of Johns, there are seven Pauls, 13 Paulines, an indeterminate collection of Gwens, and at least five Cedrics.

Sorry, must cut this report short. Rumoured Pearly Gates a hideout for very prominent VIPs. Just caught sight of a mystery man being shepherded into vacant room in Block D. Staff member bowed and called him ScoMo. Must check this out. Little worried looking guy approaching the room. Looks like Dollar Bill. Is political skulduggery afoot?  Sign out – 001.