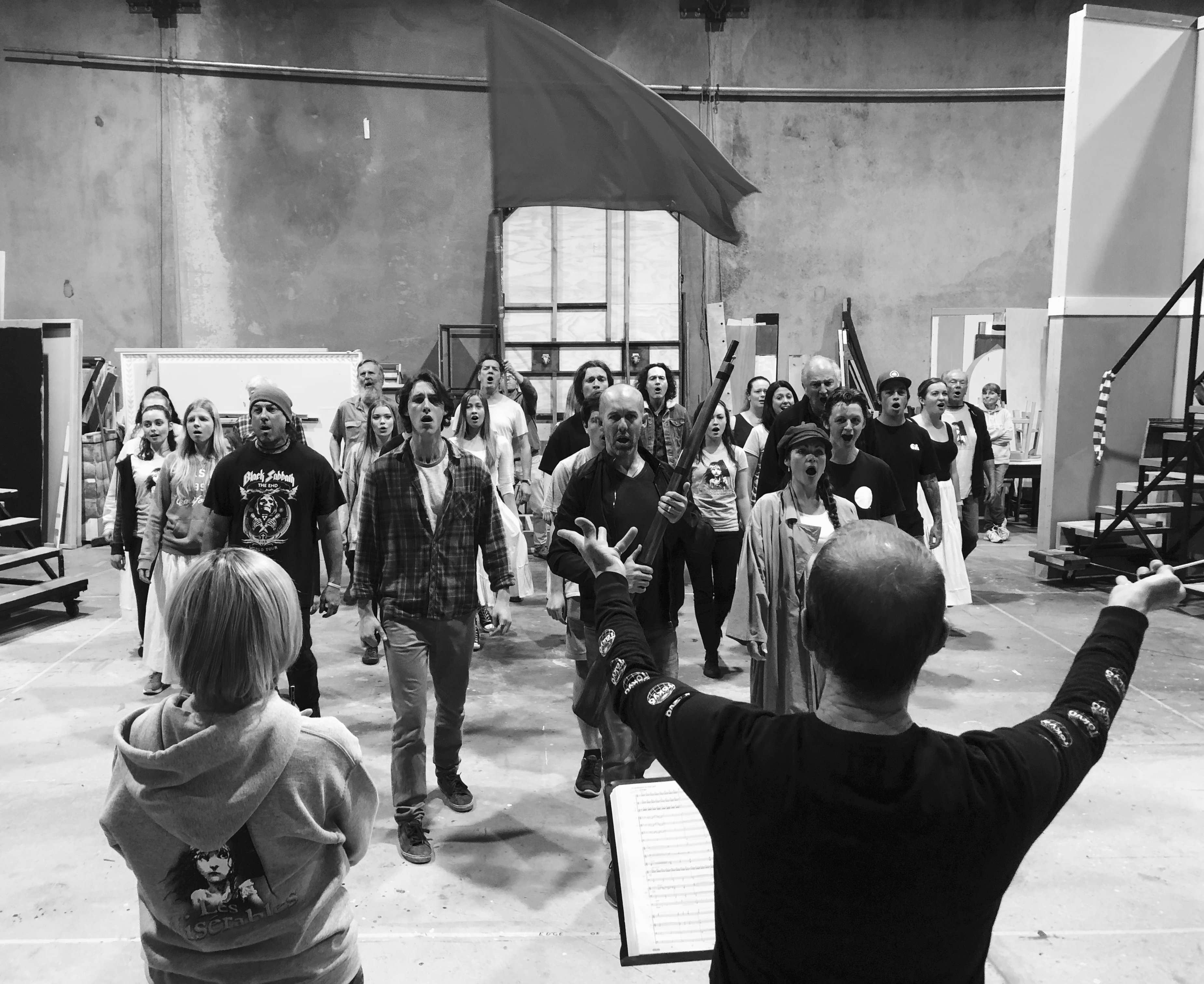 The whole cast rehearsing the end of Act 1 – ‘One Day More’ with director Gayle Cameron and musical director Don Secombe in the foreground.

Les Miserables will again be storming the barricades of the Manning Entertainment Centre in November after a 23 year absence.

The legendary show which first opened in London in 1985 and has run continuously since then to full houses and rave reviews, has now been seen by over 22 million people and seen in 44 countries and in 22 languages.  In fact, it is said that at any given moment around the world, there is a production playing on stage.

What is it that makes Les Miserables, (or Les Mis, as it is affectionately known), the best loved musical in the world?

It could be the powerful storyline of redemption, hope and the resilience of the human spirit. Based on the sweeping saga of the same name by Victor Hugo, the story moves along at a cracking pace, which makes other musicals seem lumbering. Les Mis thinks big- it escapes into a world where injustice, fairness and equality rarely prevail but where tenacity, heroism and sacrifice shine through.

Another reason for its popularity could be its magnificent and enduring music and songs.  Guaranteed to deliver goosebumps by the bucket load, the richness of sound and the range of tunes and lyrics of wit, simplicity, beauty and power draw you in.

Mix all this with unforgettable diverse characters you will met along the way and be ready for an exciting roller coaster ride of entertainment.

Taree Arts Council has been in rehearsals for this production since April, with 44 in the cast drawn from the mid north coast- Port Macquarie, Wauchope, Taree, Wingham, Forster and all points in between.

Musical Director Don Secomb, has brought together the finest musicians from the area to play the powerful “wall of sound” orchestrations Les mis demands.

Wardrobe mistress Lea Young and her large band of talented ladies have been busy preparing almost a thousand individual items of clothing needed.

Set construction has been underway for some time by the Old Bar Men’s Shed crew under the very experienced and capable supervision of David Denning.

Sammy Clarke who is in charge of props, is sourcing a diverse range of items from near and far, from muskets (beautifully made by Don Moore) to maps of Paris, flags to flasks and trunks to tankards.

Production manager, Kylie Cleaver, is kept on her toes as she is also the stage manager and must know the show backwards as she “calls” every lighting, sound and special effects cue (hundreds) to the technicians in charge of these areas when the show is underway.

At last count, there were 120 people who are voluntarily giving up their time to bring the Les Miserables juggernaut to fruition and on stage at the MEC.

Don’t go through life without seeing what all the accolades, awards and fuss is all about.

Les Miserables will be at the Manning Entertainment Centre for 11 performances from 2-18th November.  Seats are selling fast so get in soon to secure your place in theatre history.