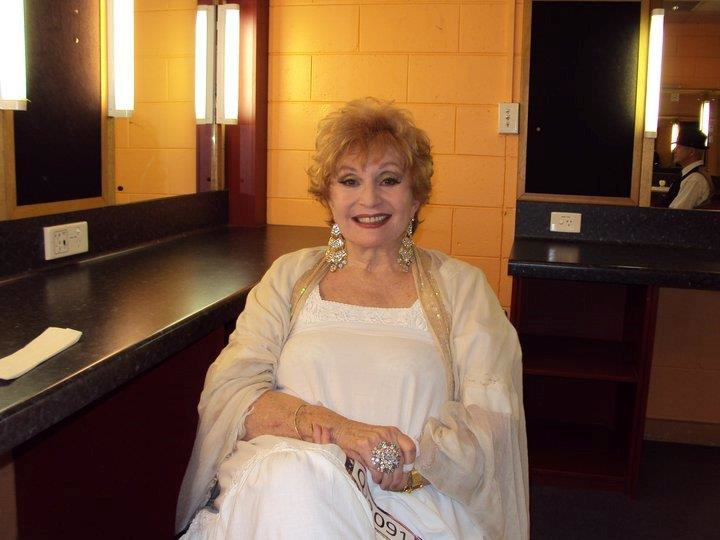 Patiently waiting to go on stage when Hazel cheekily competed in Australia’s Got Talent in 2011. She was called at 10am and didn’t get on stage till 5.30pm!

‘Write me something nostalgic,’ suggested the Editor on the phone.

‘Nostalgic!’ I replied to my friend Di (Morrissey), at my age, what else is there?’

Funny that. The older you get, the more the past impinges on the mind, and scenes you had forgotten elbow each other for attention.

I was always a show-off, needing to perform at the drop of a hat from eighteen months onwards, according to my mother anyway.

Television was going to be a new phenomenon in 1956, and I was going to be a part of it if I had anything to do with it! So I entered a contest on radio 2CH in Sydney entitled ‘The Search for Miss TV’ for which I did mainly comedy, also playing the piano in a sketch for the finals. I didn’t win of course – the judges didn’t approve of my being mother of two, daring to spend time away from them!

Still, it was a foot in the door. In those days you actually had to have talent. I had trained in drama (a bit) in London before emigrating to Australia in 1951 to marry my fiance. I’d had singing lessons, and played the piano, so I wasn’t entirely without talent, although I left much to be desired when I look back.

Funnily enough my first break came after going through the windscreen of my husband’s car in January 1961. With a cut-up face I joined the Revue Twenty, ten guys, ten girls, to sing in a new TV Variety show called Revue ’61. I’d been getting on in the business, travelling with a Tibor Rudas show called ‘Oriental Cavalcade’ and doing my act in tin sheds, which were the early clubs before pokies.  This job was something I could do, and the show was to be the biggest yet on local TV. We all had to be able to read music at sight, and I was to sing third girl – a wonderful treat to sing all those different harmonies under the leads – which I can still recall vividly today. We all thought television would go on to greater heights than even that show. Sadly that was not to be the case. Now that I look back on that wonderful show, it seems to have been all downhill from there.

Beauty and the Beast

By then I was in my early thirties, and my marriage was fragile. My husband was doing very well as a floor manager on Channel Two, the ABC, and met his nemesis in the form of a dancer on the Lorrae Desmond Show. He left me when I left the Revue Twenty, after three tumultuous years with operations to my face and an ectopic pregnancy which nearly killed me.  There we were, me and two sons aged eight and ten, on our own. So it was a relief when Channel Seven executives got in touch with me to join a new show called ‘Beauty and the Beast’ with Eric Baume in the chair, and four beauties, who were changed around each day. I was lucky in one sense that because they only offered me the same money I was getting in the choir – about 40 quid a week – they put me in every show. Little did I realise that it was all about screen time, and these days anyone and everyone, providing they have their heads on telly enough, will get their five minutes of fame!

After that I joined the ‘Mavis Bramston Show’, a fast moving satairical revue with Gordon Chater and a movie star from Great Britain, Carol Raye.  It was a very popular show and I later left to travel with a musical for J.C.Williamson’s ‘The Boys from Syracuse’.

My boys were sent off to English boarding schools in the care of my parents, and when I came back from the musical, I joined a new channel which was just being launched. Apparently they had an audience survey asking the public who they would like to see on the new Channel Ten, and my name had come up. So, along with Dita Cobb, from Beauty and the Beast, and Barry Crocker, we were all given our own shows, and mine was to be at the new time of twelve noon, entitled ‘Girl Talk’.

For four incredible years I appeared live daily at twelve, with little or no breaks in between. How I got through it all amazes me. Shows these days have hundreds of people running around with clip-boards under their arms, dictating what can be said and when.  I had total freedom, and sometimes the shows were horrible, but sometimes, when the guests were wonderful, the shows were magic. We  were the first show to travel to Hollywood to interview the stars. I had an incredible young producer called Judy Petrie, who managed to get interviews with people like Bing Crosby, Omar Sharif, Charlton Heston and Paul Newman. We did fifty six interviews in nineteen days. I arrived back exhausted, had to fly to Melbourne to accept a Gold Logie, and made what must have been the worst acceptance speech ever recorded.

As I had also won the Bronze Logie for best female in NSW, I did rate a little mention at the bottom of the front page.

Sadly women in show business and the Arts still struggle for equal recognition.

I met some wonderful people though. I was in my dressing room when the door opened and in walked Ray Milland. A movie star I had watched and loved all my life. I was facing my large mirror as he came in and watched as my face turned an embarrassing shade of red, from the neck up! I think Ray was quite flattered though, and we had a wonderful time travelling up to the mountains, only to find the view fogged in! He teased me about it for the rest of the trip! My mother was visiting from the UK and was extremely impressed!

Another person who was such a delight, was Howard Keel, the movie star with the fabulous voice, who starred at the Silver Spade Room at the old Chevron Hotel at Kings Cross where the big name entertainers appeared when in town.  I was one of the backing singers at that time, along with dear friend from the Revue 20 – Helen Zerefos. Howard Keel  became my first lover after my husband left. I had never experienced anyone but my husband, as was the custom in those days. I quickly found though, that sex without love was, as Shakespeare put it, ‘Th’ expense of spirit in a waste of shame’ and after a few experiments, by 1975 I became celibate.

After Channel Ten let me go in 1970, and a show I co-produced called ‘Strictly for the Birds’, I free-lanced, doing a part in various dramas, including Number 96, in which I (as Marie) fell in love with Vera – Elaine Lee – and parted on not very good terms with all and sundry, as I didn’t like seven-year-olds calling out, ‘ Hello Marie, are you still a lesbian?’

I did a movie called ‘The Set’ when I swam in the nude across a pool. The subsequent headlines and publicity scared me so much I looked for an escape.

So soon after that I quit the city and became one of the first so-called celebrities to buy a property in Bangalow, near Byron Bay in the NSW Northern Rivers, where I raised goats, met Di Morrissey who was writing her first best seller, and finally, with my son Mark, ran a dinner theatre called ‘Wings’ for three more tumultuous years. After that a few TV shows in Brisbane and starring in some plays for Queensland Theatre company, driving three and a half hours each way. I also appeared in a very memorable musical, “Gypsy”, directed by a dreaded man named John Krummel, who punched June Salter, the star, in the face so that she left the show. We all had tee shirts made with, ‘I Survived Gypsy’ printed on them!

I was on the farm for twenty-one years, and have since moved to the Gold Coast, where I still occasionally pop up on telly, and still perform from time to time, the last gig being with Denise Drysdale in a double act last year, and maybe I’ll take a part in a local musical at the Gold Coast Arts Centre this year.

I still love to perform, and I love show business in spite of the struggle it has always been in this country. And don’t even get me started on the music nowadays! As a follower of the greatest jazz, like Oscar Peterson and Miles Davis, and Ella Fitzgerald, and thank heaven for Diana Krall, I despair of three notes and two words repeated for half an hour, and calling it music when it is just noise……

As for so-called reality TV. There is no such thing! All the little clip-boarders are running around telling them who must be the bad guy, who must be the stirrer, who has to muck up the situation. Give me a break!

Movies are weird too – don’t you just hate all the violence? But there I go, just showing my age.

I’m so lucky to have been there when TV was new. I remember the greats;  Graham Kennedy, Digby Wolfe, Barry Crocker, Don Lane, Bert Newton, Lorrae Desmond, and all those who fronted the early years, before the clip-boarders appeared.

Je Regrette Rien. I made it through, and I’m still kicking. What more can an old performer ask?  But have I thoroughly enjoyed all and everything about show biz otherwise I wouldn’t have put up with it these past sixty years (this year!).