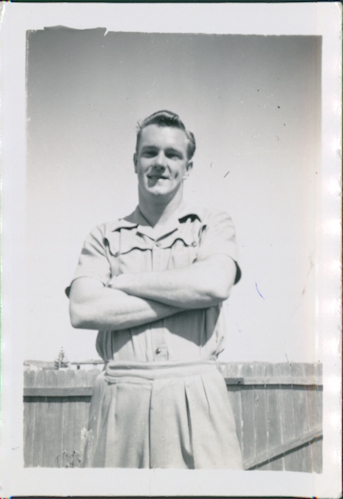 I was very saddened to hear that Crowdy Head School has closed as my father, Kevin Leitch, taught there in the 1940s and early 1950s and he just loved his time there.

My father- kevin John Leitch (1928-2004) was a born teacher. He trained at Armidale teachers’ college in the mid 1940s, where he met my mother June Dixon. He was appointed to Crowdy Head PS soon after graduating, as the sole teacher. The ensuing years at Crowdy were some of his most loved memories.

He was a young enthusiastic teacher who relished the role and spoke on many occasions of the wonderful years he spent at Crowdy with the children whose parents were mainly fishermen.

He loved the outdoor lifestyle in that idyllic location and would recount tales of taking the children down to the beach and chasing the stingrays in the shallows with sticks.

He enjoyed the ‘family dynamic’ of having a small group of students of varying ages and how the older ones helped out with looking after the younger ones.

He boarded in Harrington with the Hogans- who tragically lost their only son in an accident- and so took Dad into their home and treated him like a son. He would hitch a ride on the milk cart in the mornings to get to school.

As he was courting my mother at the time, she would come up to Crowdy for the weekend and they would spend a romantic afternoon flying dad’s remote control plane!

The years as sole teacher at Crowdy Head were magical ones for my father who always spoke of them as “dream years”. Never again would he ever eat fish or calamari as tasty as the fresh catches he enjoyed at Crowdy.

He thoroughly enjoyed being invited back to the Centenary celebrations at the school in October 2002 as a guest speaker. He loved reliving “the good old days” and speaking with others associated with the school and seeing that it was still such a vibrant community school.

How sad that the motto on the centenary cake was “the school with a view to the future” and that the Department of Education has had to close it. Hopefully the school land and buildings will go on and continue to provide education in some form for the community and live up to the school motto.

After my father’s death in 2004 we found a number of old black and white photos preserving some of his memories of the wonderful years had at Harrington and Crowdy Head PS.

He left to go to Sydney in 1956 to Artarmon PS- after being inspired by the progressive educational reforms occurring under the principal-ship of the great educator Harold Matthews. And so began the next phase of his career inspiring OC students for the next 22 years. My mother also taught at Artarmon in the infants and my sister and I also went to Artarmon so the whole family set off every day to go to school.

Unsurprisingly my sister and I both went on to be school teachers. I am still currently Deputy Principal at Eastwood PS in Sydney.

Dad married my mother in May 1955 and Mum conducted the Taree Community Choir in December 1955 in the Messiah (with dad singing baritone and my grandfather accompanying) while she was six months pregnant with me!