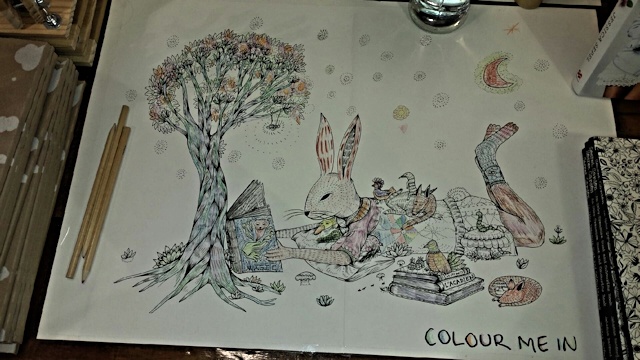 Is it art? Is it science? Is it therapy? A fad? Or perhaps spiritual escape from bad news, or a digital detox?

Well, for a start it’s just simple fun. Colouring for adults is a publishing phenomenon, with hundreds of books now available, many on the best seller lists for months.

It began in earnest in 2013, with Scottish designer, Johanna Basfords book “The Secret Garden: An Inky Treasure Hunt and Colouring Book”. She now has several books out, including “The Enchanted Forest” and her small British publishers, Laurence King, are planning more. Her books are fabulously popular, selling millions.

People who love them use words like relaxing, delightful, satisfying, calming, a private pleasure, a chance to unplug. Just play. Zone out.

Doctors suggest colouring for people who are recovering from illnesses, and are very popular for those suffering with Alzheimers. They help healing, are relaxing, as well as pass the time. Batches have been sent into prisons. Entrepreneurs, business people, adult men and women with kids all buy them. The act of colouring in beautiful intricate patterns, or landscapes, or animals, or abstract designs, has found a place, and all you need is one of the books, and some good quality art pencils.

The internet is full of articles about what it all means, and there’s plenty of debate.

The ABC’s “Books and Arts” program had a look at the phenomenon recently, and interviewed neuropsychologist and neuroscientist, Dr. Stan Rodski who says there is science behind it. He had patients who simply could not manage relaxation techniques – too overcome by stress to meditate for example. He gave them colouring to do, and says measuring brain waves and heart rhythms showed significant calming effects. He has now designed his own colouring books for adults, and says he prefers patterns, lines and shapes to defined pictures because the key elements are repetition, pattern, and detail.

Some professional Art Therapists are wary and say its not therapy because there is no “therapeutical relationship” with trained professionals. Having said that, Art Therapist, and lecturer at the University of Queensland, Claire Edwards, has helped produce a colouring book specially for transplant parents who can become very stressed. It’s called “Breathing To A New Technicolour Dream Book”, and was developed as a community art project.

Are these books art for people who can’t do art? Do they appeal to people who prefer order, and precision? Who cares! Millions love them and say its restful and fun and you can make something beautiful in your own time, at home. People frame or laminate them. They are available locally, an array of books of gorgeous fine patterns, landscapes, animals, beautiful and delicate designs… pretty much wherever your intuition takes you.

If you need inspiration, there’s a Facebook site for adult colouring in, where you can see some amazing finished images.

We have all heard of mindfulness, even tried it. There’s also meditation, or jogging…..Colouring books offer easy, repetitive pretty or dramatic work, allowing the mind to settle in a gentle peace, away from the worries in our lives. It’s a chance to turn off the computer, hide the mouse, put the smart phone on silent – and quietly colour in.

Well, in a digital world, it couldn’t last. There are now free Apps for colouring in, and clever little programs that enable you to do it on the bus, or the ferry, or on the beach.

Try the local newsagent or anywhere selling books – there are lots of the books on display. A page of butterflies in a forest is a happy dream as a first go.