One voice can become many 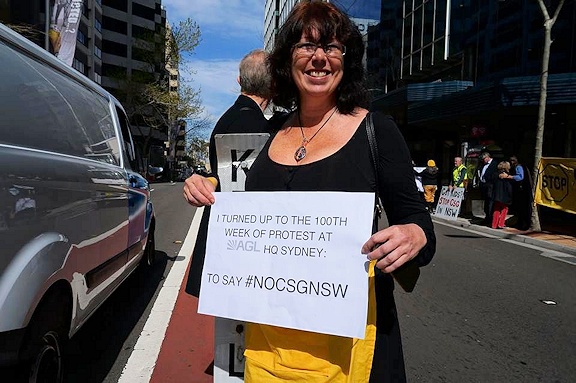 Occasionally there comes a point in life when you have to stand up and say ‘Enough is enough.’

For Manning local Jennifer Schoelpple it was October 2013.

‘I’ll never forget that morning. The tipping point for me was when the Abbott government gave the green light for the AGL pilot wells at Gloucester. That final approval to frack the wells was like a death knell. I remember almost vomiting I was so sick, I just didn’t think they’d approve it. It was a pivotal moment which said to me and others, “Let’s change the rules and laws so we – the government – can do what we want.” I was so shocked. It was one of those moments in life you can’t believe it was happening. I had always opposed the wells especially the issue of disposal of contaminated flow back water,’ said Jennifer.

Jennifer has a home in the Manning near Charity Creek but works in Sydney as a piano teacher. She is a single mum and her daughter Mathilde, nearly 14, goes to school in Sydney. They stay with Jennifer’s father during the week but she and Mathilde are always anxious to come back home to the Manning.

Jennifer explained how that one event set her on a course that has changed her life.

‘The next day after the fracking announcement I put up a bit of a rant on Facebook and Dayne Ptratzky (the anti-fracking activist known as The Frackman) said to me, “So why don’t you do something abut it” in that male kind of way. So I thought he’s right. No point in bellyaching on Facebook. But what could I do?.’

And there comes the point a lot of us reach, where we say in frustration, but what can I do? Jennifer is quick to point out, we can do a lot, one by one, and together.

‘I thought I’m in Sydney and AGL headquarters is not far away. Why don’t I go and speak to them, though at that stage I wasn’t very good at public speaking or marshalling all the facts. I put out the word to see if anyone would come with me and a young girl and four adults turned up the next morning. If it had been better organised we’d have never got in to see the AGL executives let alone let it be filmed! There was a man from the Wilderness Society who had a video camera and he filmed 25 minutes of us talking to John Ross, the AGL hydrologist. On the tape he made so many assertions that were totally outrageous like – there’s more salt in rainfall than there is the produced water – he obviously thought he could pull the wool over our eyes. He was clearly used to trying to bluff people and obviously dismissed us as country bumpkins.’

The video went up on YouTube with devastating effect for AGL, and while more people joined Jennifer no one has ever got through the AGL portals or door-stopped any executives since a housewife and single mum stubbornly sat in their reception politely asking to speak to someone about the future of their water and the planet.

Jennifer walked away from that meeting and decided to set up a protest outside AGL HQ in Sydney which has continued ever since. Her campaign was picked up by the Get Up advocacy group with her quote –

“I am absolutely furious that you people (AGL) are trying to do this to a small community… if I can’t see my little girl swimming in that river being safe … you will never hear the end of it. I will stop you, I don’t care if it takes me my whole life.”

Jennifer agrees there is generally a disproportionate number of women at CSG protests and on picket lines whether in or out of the home, as women can see that this industry is attacking the core elements their children need to survive.

‘If an industry is arrogant enough to attempt that, they can expect to have the battle lines drawn with women from all walks of life. Women see the blinding obvious – no it won’t and can’t work for many reasons – the long term effect on the ground, water and health of our children for starters.’

Six months later Jennifer and a group had a meeting with the upstream manager of Gloucester AGL Gas and spent a day trailing around with him asking hard questions.

‘But talk about a Yankee spin doctor! Eventually I got so upset I started yelling at him in tears,’ she said. ‘This is when I warned him – he would regret he ever set eyes on me!’

Jennifer feels she leads something of a double life, driving up and down to Sydney where she teaches piano under her professional name to students at Trinity Grammar. When Mathilde is not in school at PLC Croydon where she has a trumpet scholarship, she supports her mother’s activism.

‘Occasionally she gets a bit embarrassed when I appear on the TV news or something,’ laughs Jennifer. ‘My Dad comes out to some of the protest gatherings and my late mother was first to sign my original petition where I had 15,000 pen and ink signatures on paper petitions signed from around the state though most came from the Mid North Coast area…which I presented to Dr David Gillespie at Port Macquarie airport as he was heading to Canberra. He did formally lodge the petition in parliament and mum said she thought this gas fracking and oil and gas extraction were the biggest threat to the planet since technology took over.’

Jennifer is deeply concerned about the salt as well as “well creep”.

‘When you have 2000 tons of contaminated salt that has no home to go to, and there are a planned 330 wells which could blow out to 600 or more wells as we’ve seen in the USA, just imagine what will happen in the small Gloucester Valley with all those wells being fracked! Chemicals are forced into the wells under pressure and opens up the avenues for contaminates that are meant to stay down a kilometre underground, but start leeching up as it becomes a dynamic situation with all of the forces pushing super toxic chemicals into the coal seam which is not meant to withstand this sort of pressure day after day.’ She shakes her head in frustration.

‘Surely the people working there know this. It seems to me people are being paid not to speak out, not that I can prove that. I hate to point it out, but look at the former ministers and officials who are now in the employ of extraction companies. Not hard to join the dots is it? And it’s accepted. And because it continues and goes on we’re being played for a bunch of bunnies. And the problem is, not enough people take the threat seriously enough to actually go and do something concrete enough about it. People can sign on line petitions until the cows come home but the companies will just wait until the dust settles and then they’ll do what they intended to do in the first place. The only time anything really happens is when there’s people action. People who are prepared to go out to the site and lock themselves onto a machine or join the Knitting Nanas or take photos of the chemicals and bubbling foul water in once pristine waterways and put it on Facebook and send it to the media and action groups. That’s what makes the difference. That’s when the company starts taking notice, especially when brand damage kicks in.

‘The other big problem is country versus city. City people have no bloody idea what’s really happening. The majority want energy and they don’t care where it comes from. I have students who know far more what’s going on than their parents do. It doesn’t help either when the State government placates the city by stopping planned drilling in city ‘backyards’ because there’s more votes there than at Gloucester. City people might take an interest when they discover that their food and milk is coming from fodder and ground contaminated with toxic chemicals. It will take until we have an epidemic of kids’ health problems as a result of contaminated food or milk. And they’re not testing properly for them either.’

ALL THIS, AND HOME LIFE TOO

For those who show how much they care, like Jennifer, it takes time and energy plus a toll on both the personal and working life.

‘We shouldn’t have this inflicted on us, we should be able to live safely. These companies are taking away our rights to live normally and have healthy food, clean water and fresh air. In reality they’re undermining our basic human rights and pretending it’s not happening. Politicians and corporations want their bottom line to look good, and have no interest beyond the profit margin. Perhaps they don’t understand or plan to get out before it collapses, but it is a pyramid scheme, those at the top get filthy rich and the costs are passed on to the community lower down. It’s a net loss industry as it costs more to get the gas out of the ground financially and in energy than they’re going to get back.’

SO HOW DOES SHE COPE?

‘What I’m doing on my 120 acre farm is making myself completely self sustained. I am completely off the grid and have tanks holding 300 thousand litres of water, gravity feed, composting, a septic system, worm farms plus my own produce and chickens in case it all goes pear shaped. And if it does, all I need is one tank of fuel – to drive Mathilde and myself home from Sydney.’