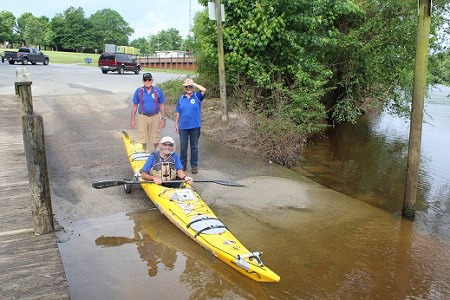 Steve Posselt on the Mississippi setting off from Greenville, North Carolina.

Steve Posselt describes himself as an engineer, author, adventurer, eco-warrior and grandfather.

Steve, aged 62, is currently paddling his kayak up the Mississippi on a personal campaign to raise awareness of global warming.

Steve, from the NSW Northern Rivers, plans to continue through the Great Lakes to the sea at the top of Canada, then fly to the UK where he will paddle across the UK including the Thames, across the English Channel and up the Seine to Paris for the UN Climate Summit in November 2015 where he will present a petition. A journey of 8000 kilometres he began January 15 this year.

“I hope to represent all Australians who feel angered and dissatisfied by our government’s inaction around climate change,” Steve explained.

“A majority of Australians want deep emission cuts to be the outcome of the Paris Climate Talks,” he says, and advises, “If you want to do something about climate change, buy green energy. With battery and solar costs coming down people will start to simply go off grid, most likely well before 2020 and what will that do? Who knows but it will be a new paradigm.”

And what motivates him most?

“I want to be able to look into the eyes of my grandkids and say, ‘Well, at least I did my best,’” says Steve Posselt. And his final message is for the National Party – “The National Party is about the land and its future. CSG destroys the land as we know it. To all of those who use groundwater, forget it when CSG comes to town. Life as you know it will be over. To all good National Party supporters who love the land: please do not let it be destroyed.”

Steve paddles to the banks of the Mississippi and sets up his tent each evening. If you want to follow his adventures go to his diary on www.kayak4earth.com.

And if the name sounds familiar, the intrepid eco-warrior Steve is the brother of the General Manager of Greater Taree City Council – Mr Ron Posselt.