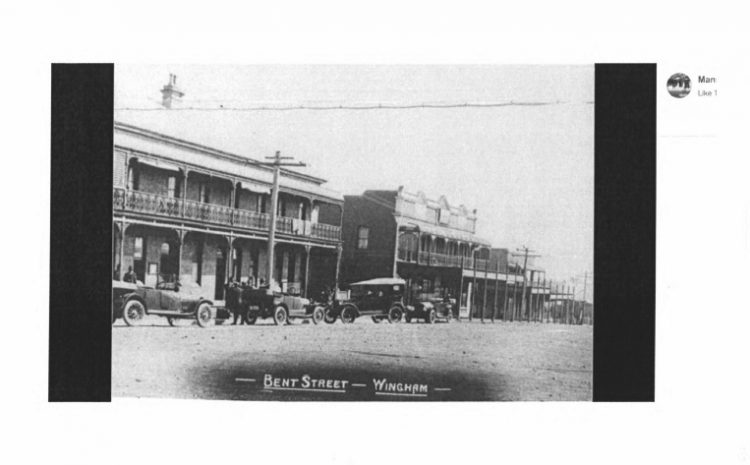 Wingham is getting a make-over. The most important thing we should remember is – Wingham is a HERITAGE town!

The tourist brochures and websites describe Wingham as –  “The oldest town in the beautiful Manning Valley, a lovely historic village on the banks of the Manning River. The village green  (correct expression, not Central Park) is surrounded by (what remains of) National Trust-listed Federation buildings and a world renowned nature reserve of rare subtropical lowland rainforest, including giant Moreton Bay figs, home to a colony of threatened grey-headed flying foxes.”

Our first town is now a fading, falling down, shadow of its charming former self.

Look at the original home of pioneer Henry Flett in Flett Street, Wingham. It is a skeleton, where the owners of the property are waiting for it to fall down and be done with it. They have resisted overtures to save it.

Henry went on to marry Miss Wynter and bought land and established an estate across the river called Taree.

Another great loss is the great old grey gum Goods Shed at Wingham Railway Station run by my grandfather, Jack Revitt. Cavernous, it housed all manner of goods headed to and from Sydney, from great boxes of pompoms for the slipper factory, to supplies for the grand Cochrane’s Emporium, and equipment for the dairy farms. Our milk went down overnight and was on Sydney tables the next day. When the circus came to town all its paraphernalia was unloaded at the Goods Shed. (My mother was once chased down the train tracks by a cranky elephant who escaped.) Pythons lived in the high ceiling of the shed dining on rats and mice, and in its huge cool shadows, I played for hours.

I weep to think what a fabulous gallery or display centre or public space it would be today. (Eric Richardson told me part of it was saved and sits on a property towards Mt George.)

Wingham Station was one of the prettiest and well kept stations in the state with hanging baskets of flowers and everything spick and span.

Similarly, the comfortable little Stationmaster’s Cottage adjacent to Wingham Station would make a wonderful community centre or train museum or similar. David Hill, when he ran NSW Railways suggested he get us have an old fashioned train dining car to plonk in the front grassy area of the cottage to use as a café.

Several years ago, dismayed at the cottage’s lack of use and poor but fixable condition, Cr. Peter Epov suggested turning the Stationmaster’s cottage into a community centre, but the leaseholders refused, despite it not being used. Since then, between neglect and vandals it’s deteriorated to approaching non repairable condition.

There is a current move to attempt to rescue the cottage in its pretty (or could be) grounds, but it seems it might be a case of too many cooks and too many ideas judging by one uninvited unsupervised local group, even if they think themselves well intentioned. Their efforts, such as overnight (which is not enforced) camping at the Brush have been a disaster. They say it brings money to the town, despite ruining the riverfront for the locals, but visitors can camp at the Wingham Showground where there are proper facilities. They will still spend the same money in Wingham shops and supermarket!  And nobody asked for, or approved, the “gift” of the bedpan waterfall in the village green, the town’s gem in the centre of town!

The unnecessary demolition of the Cobb and Co heritage stables after the Wingham Hotel mysteriously burned down, was another recent tragic loss. Instead we gain in the main street possibly the ugliest building in NSW in the shape of cement boxes.

Some of the buildings in Isabella Street had cool verandahs, and many had second story balconies. Imagine what restaurants they could be! Now unachievable since a previous Council decades back ordered all the stanchions supporting the balconies be removed.

If you look at the facades of the buildings there are remnants of old signs, art deco trims and an idea of what the town once looked like with its wide shady footpaths. A good suggestion from one resident is for colonial street lamps ( good quality!) to be put in several locations for that heritage look rather than the ugly utilitarian contemporary lamp in the proposed plan.

Pink paving as an idea for footpaths should be dumped immediately.

Mr Spear assures us that a Heritage “person” is being consulted by phone and she will run her eye over the final plans. Surely we need a Heritage landscaper and architect on site at the start of proceedings to see it through all the way!

Ideas like an electric car charging station should be located away from the main street and village green area.

Now there is money in the kitty to start to gussy up Wingham rather than a restoration project, but it’s thanks to a one million dollar grant from the Federal Government and two million from council coffers with Wingham’s name on it.  Not enough to do everything, but a start.

Amazingly as soon as the money came in, Council went to a dusty cupboard and whipped out a “Plan to Beautify Wingham” which has a faint look of the 1960s to it.

Then the Council announced there would be a meeting about ideas from the public, but many were disappointed as the “community consultation” was by Invitation Only!  Subsequently a display of the plans was set up in an empty shop in the main street with several council people on hand to answer questions.

David Spear, the Project Manager, was friendly and helpful. It was pleasing to hear his enthusiasm about the town and that the first thing to be done would be planting specific trees down the centre of Isabella Street. Which would mean digging out the ageing water drainage system which runs along the centre of the street which would take a big bite or most out of the budget. The process is to be done in stages as more funds are sought.

Mr Spear agreed there was a problem with the shopkeepers and staff taking up a big chunk of parking spaces in front of their businesses.  If customers and visitors can’t park they drive on. It seems many shop people are loathe to walk to the central parking lot which will be roofed and made secure with a sheltered walkway. One lady shopkeeper worried that she might be mugged while walking the short distance to her car in the revamped lot with her takings in her handbag after shutting up shop at 5pm!

Mr Spear remained smiling, polite and patient. Though, being a newcomer to town he’s not quite across all the local history.

Other concerns expressed centred around the village green where the shrubbery that softens the retaining wall will be taken out and possibly local Lincoln bricks be stepped around the park where they expect locals to perch on this “seating.” (Can’t see the oldies sitting there in the sun with nothing to lean back on.)  Sandstone was knocked back as “not Wingham”. (Have we forgotten how all the ships that came up river to Wingham to collect the cedar used Sydney sandstone as ballast which was dumped into the river in front of the Brush. Still quite recently enterprising locals have dredged up blocks of it for gorgeous patios, retaining walls, paths etc).

There are fears for the trees. (Especially after council workers cut down a beautiful 70 years plus old tree shading the play area in the village green, believing it to be an “invasive species” i.e, privet. It was a multi-trunk Flintwood, but they ignored pleas not to trash the tree planted by old timers.)

Many locals want shady seating to watch the cricket, and an old fashioned bandstand. Mr Spear assured me the entrance to the green, the heart of Wingham, with its mosaics, the plane and the old log will thankfully remain.

One hopes something attractive, like a raised seasonal flower bed might adorn the current sewer lid roundabout at the end of Isabella Street. Or as has been suggested by one local, a lovely heritage lamppost.

Mr Spear says he wants to do the trees in Isabella Street first up as it will make a welcome and dramatic improvement and get locals enthusiastic about the project. One hopes that other heritage grants will be available for specific projects like the Stationmaster’s cottage.

Wingham is our first town. Tinonee, where once the “highway” crossed the river by punt, desperately needs a café as (apart from the museum) there is no reason for tourists to pause since Memories, Artisans and The Mondrook Café stopped opening regularly. We still lament the loss of the Terrace Cinema. However the old courthouse in Tinonee is being restored and is going on the market which would make a wonderful guesthouse/café.

Tourists and city dwellers don’t move to or visit places in rural regional areas that look like the western suburbs of Sydney. We know there are lovely villages scattered all over and around our main towns. There needs to be an imaginative, long view developed by Council now to keep the open spaces clean, green and shady, the river frontages and koala habitat safe and protected.

Wingham could be a peaceful oasis of old world charm and heritage. The Taree riverfront is a lost opportunity. And we are yet to get any clue as to exactly what Figtrees On The Manning will look like.

Forster and Tuncurry have a buzzy vibe and cater to the retiring city clientele as well as tourists.

Hawks Nest, with its forested and green spaces along a magnificent coast is under threat with a proposed development next to the golf club for medium density (at the moment, maybe it could go higher) highrise proposal. (There’s still time to lodge complaints with council.) More land is being considered for highrises with ocean views which would rake in a possible billion bucks for developers.

Do we really want to have the blight of the Gold Coast along our coast?

Sadly my birthplace of Wingham is looking dowdy and boring. Some buildings are so run down they look unsafe when all that is needed is a heritage facelift, not destruction. Shops are being vandalised as there is no police presence day or night despite the Wingham Police Station being functional and its occupant living there but working out of Taree.

If it wasn’t for the clean-up Dr Stockard and a very few others do, the Brush would be overflowing with drug paraphernalia and its outskirts littered with trash from some free campers.

And while the trees in the main street of Wingham will be lovely, walk around the side streets where the grass in median strips isn’t cut or maintained regularly. Have a look at the footpaths around our Brush, for instance – a disgrace by any standards.

Jump in and have your say before it’s too late. Whatever is done to Wingham we’ll have to live with it for the next 50 years or more.