FIGHTING FOR THE FOREST 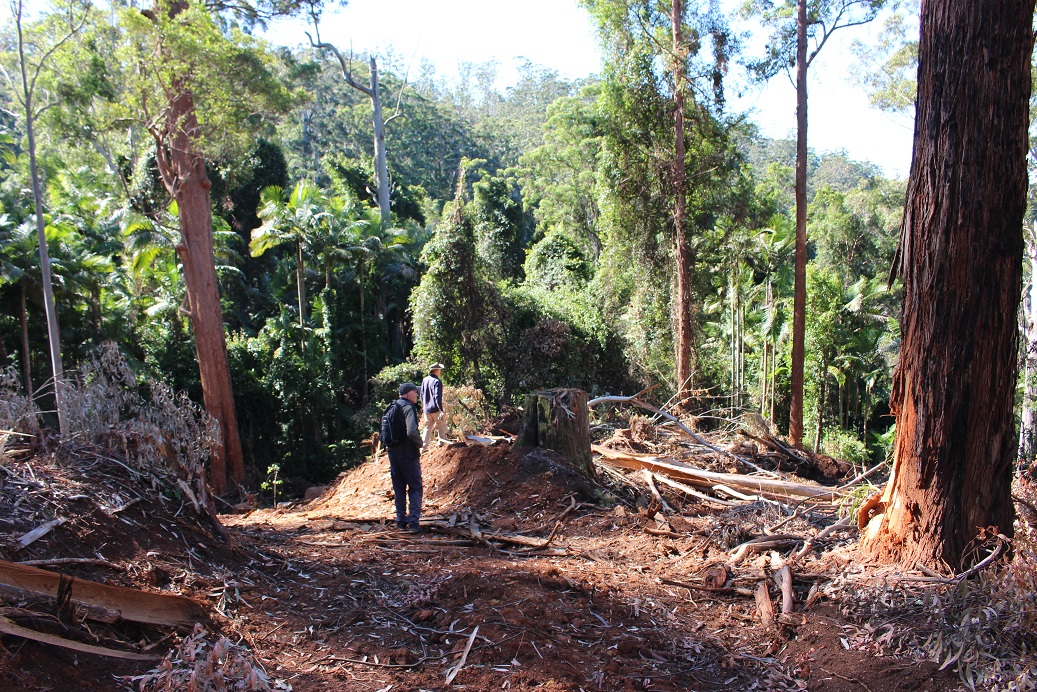 Rainforest ecologist, Les Mitchell has formed a  local environment group, No Electricity from Forests (NEFF), and he believes that recent logging by the NSW Forestry Corporation (FC) has caused serious damage to endangered subtropical rainforest in the Camden Haven River catchment of Comboyne State Forest west of Kendall.

As proposals to intensively harvest eucalypts in 45 to 60 hectare compartments over 140,000 hectares of State Forest from Taree to Grafton come into effect, NEFF has grave concerns that similar deleterious impacts on adjacent rainforest communities and other reserved forest are likely to increase.

The group lodged a complaint with the Environmental Protection Authority about the matter.  The EPA has investigated but has found that the FC did not encroach on the reserved rainforest as defined by the maps marking the boundary between the harvesting area and the rainforest reserve.

In January this year, NEFF held an on-site meeting with FC officers from Wauchope and Coffs Harbour to discuss the harvest plan for Compartment 145 in Comboyne State Forest, before the logging took place.

Spokesperson for NEFF and rainforest ecologist, Les Mitchell, said “At that meeting we discussed the large area of reserved old growth eucalypt and subtropical rainforest on the steep slopes adjacent to the proposed logging area and FC agreed that the logging would not impact on the rainforest edge and certainly not protrude into it.”

On Sunday May 10th, several members of the group (maintaining physical distancing) inspected the site at Compartment 145 where the logging had been completed.  “We were shocked to see the destruction and blatant encroachment down steep slopes to the rainforest edge and even breaching the rainforest edge.

Habitat and ‘Retention’ trees were left, but the damage to the rainforest and the logging down steep slopes is environmental vandalism and seemingly unnecessary given the relatively small number of logs FC took from those areas.

“Lowland Rainforest on the NSW north coast is an endangered ecological community and the disturbance caused by FC logging operations will no doubt see a significant expansion of lantana which was apparent on top of the ridge following past logging activities. Even though the endangered Stuttering Frog was recorded from a protected watercourse within the rainforest, the logging on the surrounding steep slopes may well lead to increased siltation of that stream and thus detrimentally affect the frog.”

Added Les, “Rainforest is extremely sensitive to fire damage. Last fire season after a prolonged dry period, many smaller patches of rainforest were affected by fire and their situation was exacerbated by the long history of logging of adjacent eucalypt forests, making the rainforest more fire prone. In the future we will see greater risk to the rainforest burning during prolonged dry periods as we witnessed last fire season.”

NEFF considers the values of one of the larger patches of endangered lowland rainforest remaining on the mid north coast and certainly the largest patch in the Camden Haven River Catchment, has been seriously compromised.  Obviously the official reserve boundaries do not reflect the true extent of the rainforest and these must be reviewed in light of what has happened in Comboyne State Forest.

According to Les Mitchell – “This needless destruction of our unique wet forest ecosystems for little wood product gains must stop.”

Letters of complaint have also been sent to the NSW Forestry Corporation (FC) and the Local State Member of Parliament, Leslie Williams.

If you feel the same, please contact your local Member wherever you are. This is a national tragedy and emergency.

Les is a retired landscpe ecologist who worked for the NSW National parks and Wildlife Service for 26 years based for the most part on the NSW South Coast.  He has a working knowledge of rainforest ecology and the forest communities of the east coast and has been involved with landcare for more than 20 years. He volunteers with Port Macquarie Landcare and Friends of Kooloonbung Creek Nature Park and is a volunteer guide at Sea Acres National Park. He is actively involved in forest conservation and climate change campaigns on the mid north coast and takes an interest in Port Macquarie Hastings Council affairs, including membership of a Council Sustainability Working Group.