Turkey – a Journey Through History 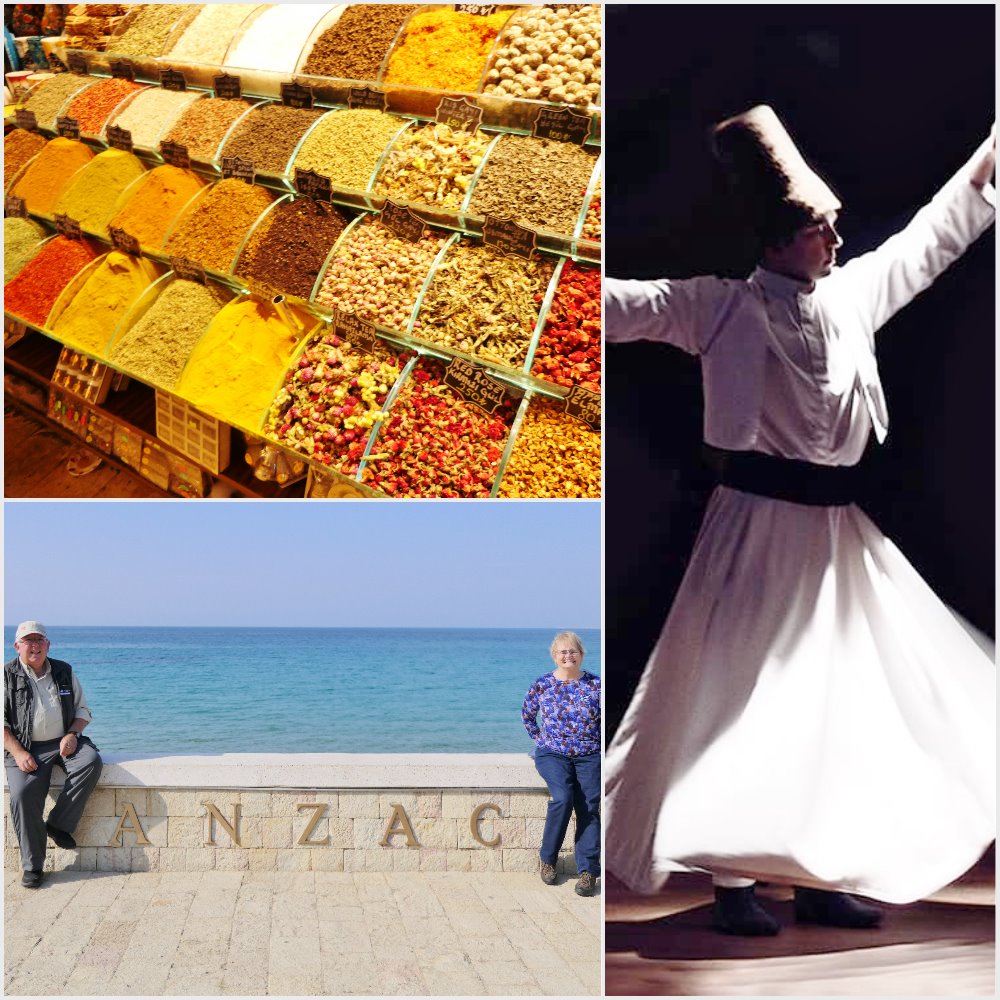 Spice markets, a Whirling Dervish, Jen and I at ANZAC Cove

Recently Jenny and I had the pleasure of travelling through Turkey on an end of October to mid November guided tour.

We were a little apprehensive before the trip and followed closely the News reports on the troubles with the Kurdish militants of northern Syria and the Turkish push into this area to create a buffer zone from these groups. The Australian government recommended care but continued to say travel was okay. As it turned out we were much safer in Turkey than in beautiful downtown Tinonee.

We flew Singapore airlines, cattle class, with a short stop to change planes in Singapore. After many hours on the plane we arrived in Istanbul. No time for jet lag we were straight to the Spice Markets. Colour, crowds, noise, haggling ….amazing place. Sleep was appreciated, that night, as the flight and tour, with little sleep, had started to taking its toll.

Next day, refreshed, we were off along the Gallipoli Peninsular to view and get a better understanding of ANZAC Cove. This significant place to Australian and the Turkish peoples showed the futility of the objective of taking the high ground behind the wrong landing site. The troop boats had drifted astray on a moonless night and landed in a location that couldn’t have been worse, high cliffs in front and little flat land. The ANZACs tried to gain ascendancy for some nine months before the order to evacuate was given. Some three thousand ANZACs lost their lives for no gain. The ANZAC reputation was forged. A very moving experience!

Next, across the Bosphorus. This is the waterway that separates Europe from Asia. Some four hundred ships a day sail these waters travelling from the Mediterranean to the Black Sea.

Turkey, between the Tigris and Euphrates Rivers is known as “The Cradle of Civilization”. This is where people stopped being hunter gatherer nomads and started living together in villages and began growing crops and domesticating animals.

Turkey has layers and layers and layers of history. It seemed as if Turkey had been overrun by everyone. At various points in it’s history, the region has been inhabited by diverse civilisations including the Assyrians, Greeks, Romans, Thracians, Phrygians, Armenians, Mongolians and Ottomans. Each leaving a page of history to be explored and discovered.

We visited the ruins of Troy with its amazing sequence of destruction and rebuilds time and time again. The Roman city of Ephesus, that is still being excavated, with its wonderful marble roads and villas with amazing patterned tiled floors was breathtaking.

Aphrodisias, ancient city, was the ruins of another intriguing place we visited. We had never before heard of it but, it was magnificent! There were the remains, in stone, of a pool some 200m long and an open air stadium that seated over 30,000 people. What fantastic structures they would have been in their prime. How did they have those fantastic skills to build them some 2000 years ago??

We also enjoyed a museum dedicated to the Whirling Dervish people who were very religious and meditated and prayed by whirling around and around and around. They are very famous for these feats.

Continuing east we came to Cappadocia in the middle of Turkey where people hid from invaders and persecution by building caves houses in the cliff walls of secluded valleys. We even visited an underground city tunnelled into the ground where animals as well as people could be kept safe. The rooms had tunnels between them with round rolling stones as doorways, to stop attacks.  They even had a ventilation system. Jaw dropping!

We visited the tomb of John the Disciple and the house where Mary, Mother of Jesus, was said to have spent her last years. We saw the cave where Abraham was born. We visited ancient mosques with old inscriptions mentioning Abraham, Noah, Mohammed and Jesus. All an important part of the Islamic religion. It is hard to understand that Christians and Muslims believe in the same God but, argue over who was a prophet and who was the Son of God, among other differences. In Cappadocia we also visited the world’s oldest church. It was in a cave!

We missed our hot air balloon flight in Cappadocia due to poor weather conditions. That was disappointing.

On another day we visited Mount Nemrut, the tomb of an ancient King. We changed to four wheeled drive vehicles and climbed, twisted and turned for one and a half hours. On the top of a mountain, in a very isolated spot, was the tomb complete with enormous stone statues of five Gods including Zeus and  Hercules.

Another highlight was an excursion to a Neolithic site, at Gobeklitepe, which was being excavated. There were carved monoliths set up in a circle as a religious site. An amazing fact was Stonehenge, in England, was constructed 2,500 years ago. This site was produced 10,000 years ago. Unbelievable how it must have been done.

We continued our eastward journey and ended up at the Aleppo Gates only eight kilometres from the Syrian border. We had no issues whatsoever with the close proximity to the troubles. Everything was going smoothly. In the city of Gaziantep we visited beehive houses made from mudbrick. These houses have been built by Kurds for thousands of years. The family we visited had twenty children – 14 boys and 6 girls – Wowsers! Boys are educated and girls aren’t. The reason for big families is the kids are labourers for the family farms or businesses. They were happy people and seemed to enjoy life.

We flew back to Istanbul where we cruised on the Bosphorus, visited Sultan’s palaces, toured “The Blue Mosque” and enjoyed an afternoon at the “Grand Bazaar”. All eyeopeners and great experiences.

We had a wonderful guide throughout Turkey. He was a native Turk and his name was Veysel. He knew his history and imparted many wonderful stories.

On our way home we had a four day stopover in Singapore. The new gardens at Marina Bay were a highlight and recommended for anyone travelling there. The enormous “Flower Dome” and “The Cloud Forest Dome” will take your breath away. If you travel to Singapore don’t miss these.

On our return we had three recorded messages, on different days. “Bushfire!! Evacuate Now!” As I said I think we were safer in the war zone in Turkey than back home in Bushfire torn Tinonee.

(Rex’s “Antiques and Collectibles” Column will resume next month.)