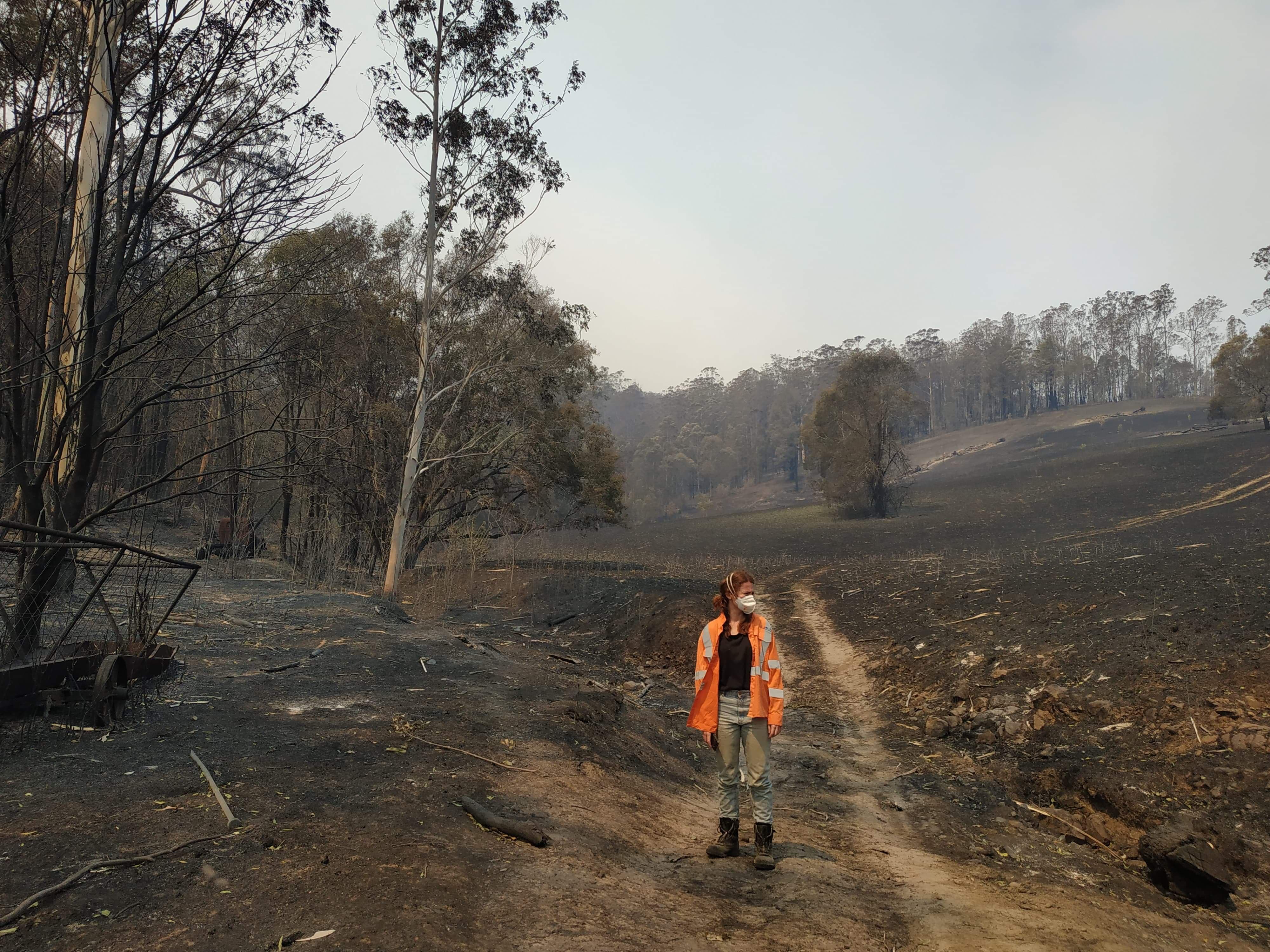 When we evacuate for the second time to the Wingham showground, we are there for forty minutes before the cops turn up.

‘You need to move on,’ the coppa is saying in a calm and level voice to a medley of ashy and distraught faces. ‘Wingham’s being evacuated. Go to the showground in Taree.’

The evacuation point is being evacuated.

Four days ago, a fire like no other— unprecedented, they keep saying as though what we call it makes the destruction more palatable— tore through the village of Bobin on the Mid-North Coast of New South Wales. That’s Australia for those who aren’t familiar. The fire got pretty much everything of ours. I’m getting bone tired of saying that but there it is. It’s starting to feel like fire porn to recount the loss over and over. We lost everything. What? Everything? Yep. For three nights we’ve been living with friends of ours on a farm down the road. They saved their home; small blessing. They still have a house to lose.

Evacuating this second time is an easy decision for us, we don’t really have anything left to burn.

The cops move people on, a huge billow of smoke to the north and west the backdrop to his news. That doesn’t make the south-east safe; they’re burning too, only the nearer fire blots out their smoke trails.

In the car, my husband and I have a conversation. We are too exhausted and stressed for the theatrics of tears; wide eyes and hard voices are us now.

‘Where should we go,’ I ask him, ‘if Taree becomes unsafe too?’

He is gripping the steering wheel so hard I can see veins in his fingers. Delicate, they look. Stupidly ill equipped, like we all are. In the back seat, three dogs whine softly, an undercurrent to our own closeted fear. We have bound it down, the fear. Bound it tight under cigarettes and adrenaline and a new glassy version of ourselves. We have less distinction in our personalities now. We are boiled down to the essentials of who we are. We do not have space for smiles. We do not have the time for the normal anxieties of life before this fire.

He doesn’t have an answer for me. No one does. Our government is explicitly ignoring the severity of thousands and thousands of displaced people, half a billion barbequed wildlife. We have no leadership and besides disasters like this don’t happen here. Not in Australia. Not the lucky country. We aren’t Iraq or Syria or the Congo.

Yes, it is, I want to scream at them, Yes it is. We were warned: This is the future we bought with reckless carbon.

‘The ocean,’ I finally answer my own question, threading my fingers between my seatbelt and my body. I’m dressed in baggy pants that don’t belong to me— I no longer own any pants. The shirt is mine; I’ve been wearing it for four days. The rest of my clothes are either gone or so sooty I cannot wear them and still breathe cleanly. ‘The sand can’t burn.’ Right?

In my mind, I see the sands of Old Bar Beach, Crowdy Head, Black Head turn to plains of glass under the unrelenting— unprecedented— flames that bear down upon us.

This is what happens when we turn away from Country.

‘Fuck Taree,’ Simon— my husband— says, and he changes lanes, heads for the highway.

I know he knows we can’t go south (there’s an eighteen-kilometre fire either side of the freeway) or very far north (I’ve actually lost track of how far north of us the flames are spreading) but I say it anyway. ‘Where are we going? We can’t get through, the highway’s closed.’ We can’t get out.

His eyes are this incredible grey-blue colour that can be the warmest summer skies or the iciest arctic ocean. Now, now they are empty as thoughts and prayers. ‘Kate and Si’s,’ he grounds out, speeding to overtake a water truck ahead.

Kate and Si live at Coppernook which was also on fire. It isn’t now. That’s all we have grace for at the moment: places that aren’t burning now.

‘But Bear…’ Bear is our eldest maremma, a working sheep dog. He was at home on the farm when the fire tore through, shepherding every single ewe and lamb under his care safely through that shit show of a blaze. Our neighbour said the twelve-acre paddock that the sheep were in went up within a minute or two. Somehow, the sheep are unhurt, Bear too… at least on the outside.

Something inside of him was torched. He’s a dog whose favourite pastime was laying in flower patches and plumes of soft grass. He’s the recipient of the lovingly awarded World’s Worst Guard Dog for his gentle nature. Now he’s biting people and lambs.

I bring this up because Kate and Si have two little girls and a forty-kilogram working dog with PTSD is not a nice thing to bring into someone’s home.

‘It’ll be fine, Silks.’ That’s me, my nickname. I don’t feel very silky right now. I feel coarse as sandpaper on gravel. I feel othered from the woman who once wore that name with smiles and a wink.

Behind us, before us, the country burns.