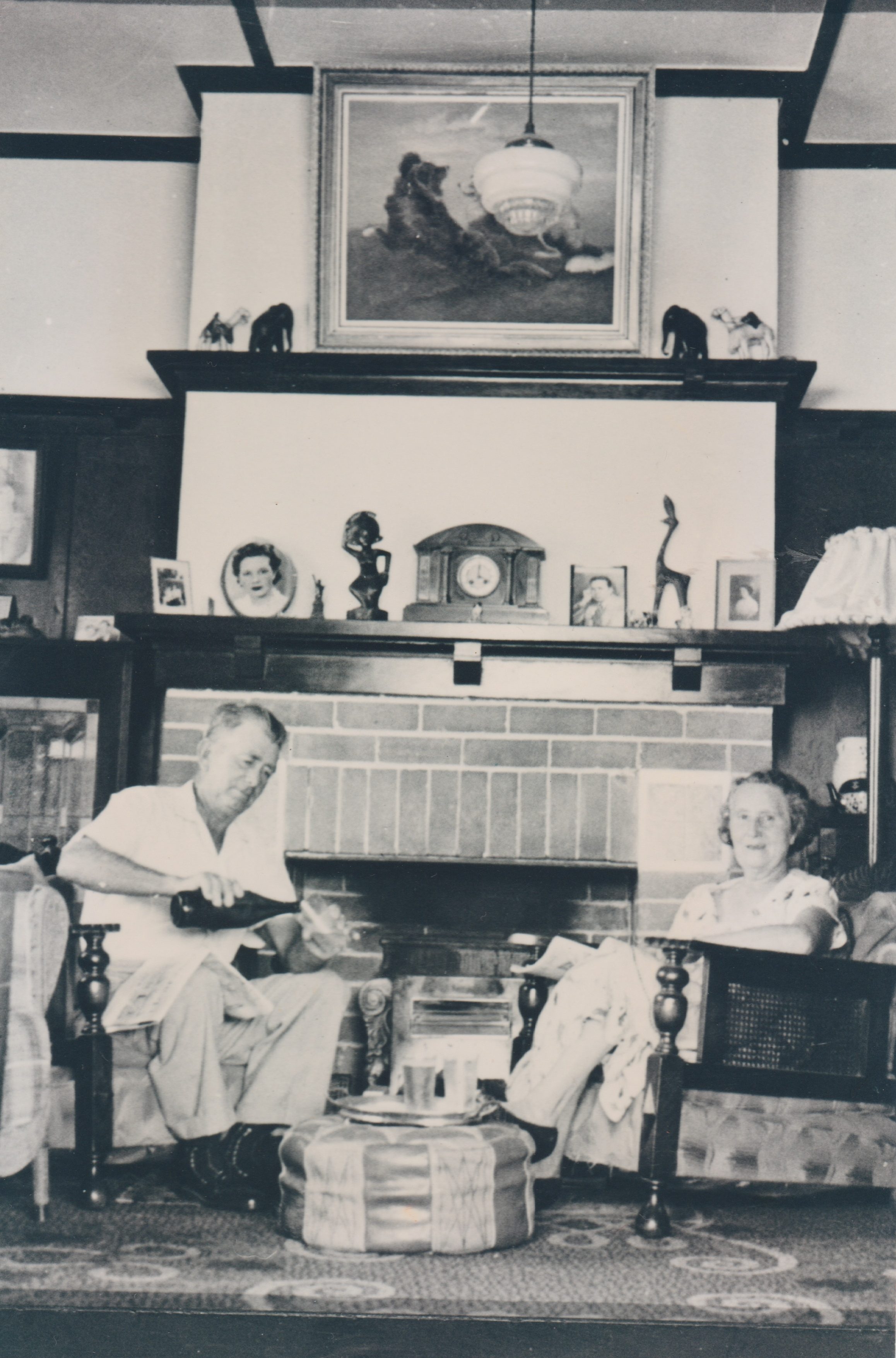 The Good Old Days A glass of stout and a sherry while listening to the ABC radio news. The editors grandparents (Jack and Louisa Revitt) at the family home in Wingham

We have a government led by a Prime Minister in denial that anything is wrong. His sales pitch and hype is hitting a sour note. Not to mention the secrecy. For a marketing man he has a tin ear.

Not that it matters much. Few of us are listening any more.

We are struggling like the rest of the country.

And whilst it may be hard to muster much Christmas spirit and New Year cheer we really must try. We can’t allow ourselves to fall in to the abyss of gloom and doom.

Although some good has come from the tragedy of the fires and drought – we know we can rely on our Rural Fire Service, the volunteers, our charitable organisations, our families, friends and neighbours, near and far.

We cannot rely on our Council who shut their doors on us at the first alarm bell. We’ve learned that the hard way.

We learned that we don’t have, but need, strong effective leadership. Someone to co-ordinate and strategise the whole box and dice; the resources, the people evacuated, the organisations and varied groups all prepared to pitch in. But it was piecemeal, unco-ordinated and wasted time, effort, resources and money.

Not only in times of emergency, but it is becoming clear that we have to look after ourselves. Local knowledge is valuable, as is a deep love and commitment to living here. Besides, there’s nowhere to run anymore. The whole world is up the creek without a paddle or, too often, any water.

This is not the Australia I have known, which, while not perfect, was simpler, values clearer, leaders respected, where opportunities were there if you worked for them, as we made things, dreamed big, and enjoyed simple pleasures.

One senses a yearning in older generations reflecting on that past, while kids today despair as they see a cataclysmic future looming, dreams such as owning a home with a backyard a near impossibility, and a country bereft of heart and hope.

How did we get here? The constant awareness we are under the thumb of China, who may take around 40 percent of all our exports, but at what price? And not just here but worldwide. The belt and road initiative seems a highway to domination. They already own some of our ports and airports and land and food and water.

Infiltration into our institutions and homes is reported regularly.

The local dairy farmers whose milk cans were collected by horse and cart, or an old truck or paddle steamer along the river, supplied us and Sydney and surrounds with the best milk. We could afford the best meat and seafood, even the poorest family had mutton, and old boiler chooks, and good lamb chops. We grew our own as much as possible, and cooked our own. A meat pie or a sausage roll, a bottle of Passiona, a “spider” milkshake in chilled tin shaker was a treat. But never as good as Mum’s cooking.

I recently stood in the lounge room of my grandfather’s house he built in Wingham and was swept back to my childhood, where he and Nana listened to the ABC radio news, and later the ABC TV news, where my uncle often appeared as a foreign correspondent. The bookcase filled with my great grandfathers’ books was all the entertainment I needed. I felt safe and secure and wanted for little.

And then as I travelled the world as a journalist and a diplomat’s wife, I saw how those less fortunate lived, and also how the rich lived, and knew how lucky I was to have Australia as my roots, my home, where no matter what your status, you were as good as the next bloke.

I never imagined I would be ashamed of my country. The corporate greed and misdemeanours  like tax avoidance, putting profit before people, the rape of landscape, the greed and heedlessness of respecting country, friends and neighbours and those who seek our shelter and an opportunity to do as we do.

It made me think, when push comes to shove in a fire or a flood, whom do we call upon?

We have to look after each other.

We can’t trust many councils, most politicians or corporate leaders, or often, even our media.

This is not right!

So let’s decide to do it ourselves. There are towns around the country like Yackandandah in Victoria who have established a 100% volunteer run community group, formed in 2014, with the lofty goal of powering this small Victorian town with 100% renewable energy and achieving energy sovereignty by 2022 and are powering towards achieving that soon.

There are ways to have an independent internet network. We need to look at how we buy and sell and trade. We can’t totally shut the gate and just look after our own, but big producers, if there are any left, need to stop thinking of China as the pot of gold, we need to engage with the markets of India, Indonesia, Thailand, Japan, Vietnam.

Basically we need to rethink our priorities, how we live and how we go forward.

Do we want lifestyle villages, or do we want development that allows for trees, and backyards and environmental designs, that doesn’t allow developers to denude koala habitats and corridors.

We need clever people with experience, talent and brains to start stepping up. Not a bunch of blokes who badly need a job so run for council. Or an entrenched network on council who have history and do things as they’ve always been done at the behest of powermongers.

What a lost opportunity was the appearance of our Mayor in a TV forum on prime time national television from Taree with a solid articulate group who spoke sense.

I know from my own media experience, that an appearance on any national TV program, particularly one that goes for over an hour, is a massive opportunity to get things done; to influence public debate and to leverage State and Federal Governments to act and provide support.

We need local political leaders who will advocate and work for us, who will find solutions to our challenges and our problems and will not make excuses as to why things cannot be done. All too often, I hear excuses why things can’t be done and generally this comes from people who either don’t have the experience nor the understanding of how we can achieve things and make a difference.

We do have several people on this current Council who are talented and competent but they are constantly outvoted by a significant organised clique.

Sadly, many of our councillors don’t appear to understand government, nor how to govern. Inclusion and transparency are just nuisances to the administration and to those who back them.

So start spreading the word, identifying smart thinking, caring people to step up and help lead us. Network. Send us your thoughts and ideas. We need each other like never before.

In the meantime. I hope you find some peaceful interlude these holidays to enjoy your family and this special place we share.