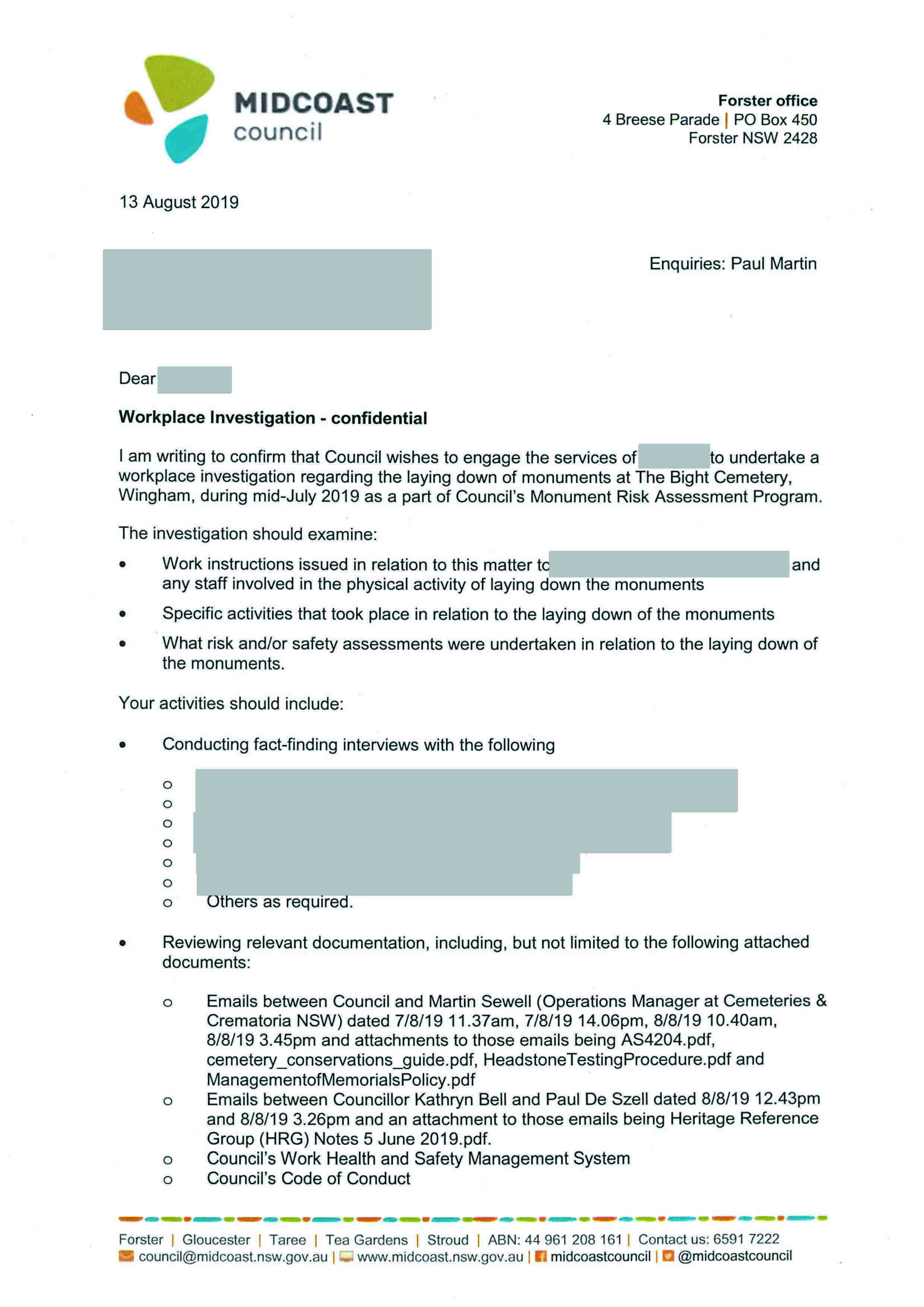 Almost six months have now elapsed and the residents of the Wingham and indeed the broader MidCoast community, particularly those who have family in cemeteries throughout the LGA, are still no wiser as to how such a desecration of their cemetery, with over 60 headstones callously “laid down” could have occurred and indeed who was responsible?

Nor do we know if there was ever an actual plan in place for work to carried out at the Bight Cemetery (which is supposed to happen), authorised by a senior executive; or was it just that a couple of Council blokes showed up and started ripping down headstones?

Surely the workers who undertook the physical work should have realised what they were doing; or was it poor direction from the management, or perhaps that the workers were in such fear of retribution from their bosses, in what must be an awkward and unstable working environment with morale at Council being at such a low level, that they pulled down anything whether it wobbled or not?

Given this toxic culture within MidCoast Council at this time, it is still very hard to reconcile that a couple of blokes would have turned up and taken on this type or responsibility on their own volition without some form of mandate or briefing from a senior manager? Yet you can bet that when the dust settles the majority of the blame will be attribute to those workers.

We now know that Council’s licence from the Office of Environment and Heritage to undertake any works at the Cemetery had lapsed several years ago (and why wasn’t it renewed?). Why did the system breakdown to such an extreme level, if there was even a system, and who will actually be held accountable for the lapse of the licence?

What is frustrating to the community is that the ‘official’ investigation into the incident has been carried out by a person only known to the General Manager through a set of Terms of Reference which have not even been shown, let alone validated by our elected representatives, the Councillors.

And from the outcome of the Rescission Motion back in October it seems the majority of our Councillors do not even appear to want to know what actually happened at the Bight.

It’s not good enough for our elected councillors to say we don’t want to know what happened, we just want to be assured (by the General Manager) that it will not happen again.

At MidCoast Council’s meeting of 25 September a motion was passed to allow all Councillors to view the final Investigation Report on a vote of  9 to 1, but two days later there was a backflip, and Crs Pontin and Roberts, who voted for the original motion to make the Investigation Report available to Councillors,  submitted a Rescission motion together with Cr Hutchinson, which meant everything was placed on hold until the 23 October Council meeting where the matter was to be debated again.

On that occasion the Rescission Motion was upheld on a vote of 8 to 3, with only Councillors Epov, Bell and McWilliams fighting for the right to have access to the Investigation Report and for some transparency into the incident.

Community representatives from the Blight of the Bight group, Tim Crossley and Caz Baker, made logical and impassioned pleas for clarity and transparency, but these fell on deaf ears.

An interesting twist and indeed a significant precedent was the approval by the Mayor and the General Manager  to allow Mr Damien Welsh, the United Services Union (USU) Organiser, to address the Council in support of not allowing the publication of the Investigation Report to Councillors.

This led to Cr Peter Epov objecting to the address by the USU Organiser, which was overruled by the Mayor.

“The established practice is that the Unions transact all matters with either Council’s HR Manager or the General Manager. Councillors are not allowed to be directly engaged in industrial relations matters. In my view it was inappropriate to have the Union Organiser address Council and this has set a very dangerous precedent, where the Unions may in future seek to address Council directly on any industrial relations matter, if they are not happy with the outcome of negotiations with the General Manager and his staff.’

The outcome of the Rescission Motion has left many locals just shaking their heads and crying: “COVERUP!”

The Manning Community News has recently been provided with a redacted document obtained under GIPA – Government Information (Public Access Act) by a member of the public which is both the letter of appointment of the Investigator and instructions pertaining to the Investigation.

This letter signed by MidCoast Council’s General Manager, Adrian Panuccio, to the Investigator, whose name is blanked out sets out a very limited scope of investigation.

The letter is dated 13 August 2019, and it reveals that our General Manager required that the Final Investigation Report be presented to him by Friday 27 September 2019, which was two days after the Council Meeting where the vote was taken to 9 to 1 to make the Report available to all Councillors.

And curiously the deadline for the Report was not revealed to Councillors nor the Public, but Friday 27  September was also the last day that a ‘rescission motion’  could be submitted to impose a stay on the release of the Investigation Report to Councillors.

The very limited scope of the Investigation Report just backs up the comments made by members of the Blight of the Bight Facebook group who have had serious reservations for some time.

We understand that Cr Kathryn Bell, Chair of the Heritage Committee and whose name appears in the letter of instruction was not interviewed, nor was Cr Peter Epov, who was one of the first responders to the Cemetery and took hundreds of pictures and sent them on to Council’s Director of  Community Spaces which led to the immediate suspension of the Monument Risk Assessment Program.

In his Report to the 18 December Council Meeting, General Manager, Adrian Panuccio, revealed that the Bight Cemetery Investigation was undertaken by Peel HR, a Newcastle workplace consultancy.

This was an issue that received widespread media coverage. In his report to Council, Mr Panuccio summarises the findings into three and a half sentences:

“The work undertaken at the Bight Cemetery were not appropriately carried out. Specifically, the work was not diligently planned, and did not adequately address stakeholder engagement. As a consequence, it is acknowledged that the Council incorrectly laid down a significant number of headstones on 19 and 22 July.”

Surely we all knew this back on the 11 August at the public meeting held at the Wingham Bowling Club.

And how much did Council pay to learn this insightful detail?

Whilst Council has refused to video recorded and broadcast (livestream) all their Council Meetings there is an audio recording which is now published. We encourage all concerned residents to listen to these recordings and become informed as to how this mob really operates. So much of it is cringe-worthy and embarrassing. Let’s try to get more grown ups with smarts in there come September!

If you can’t listen on 2 Bob Radio, then go to Council’s website: