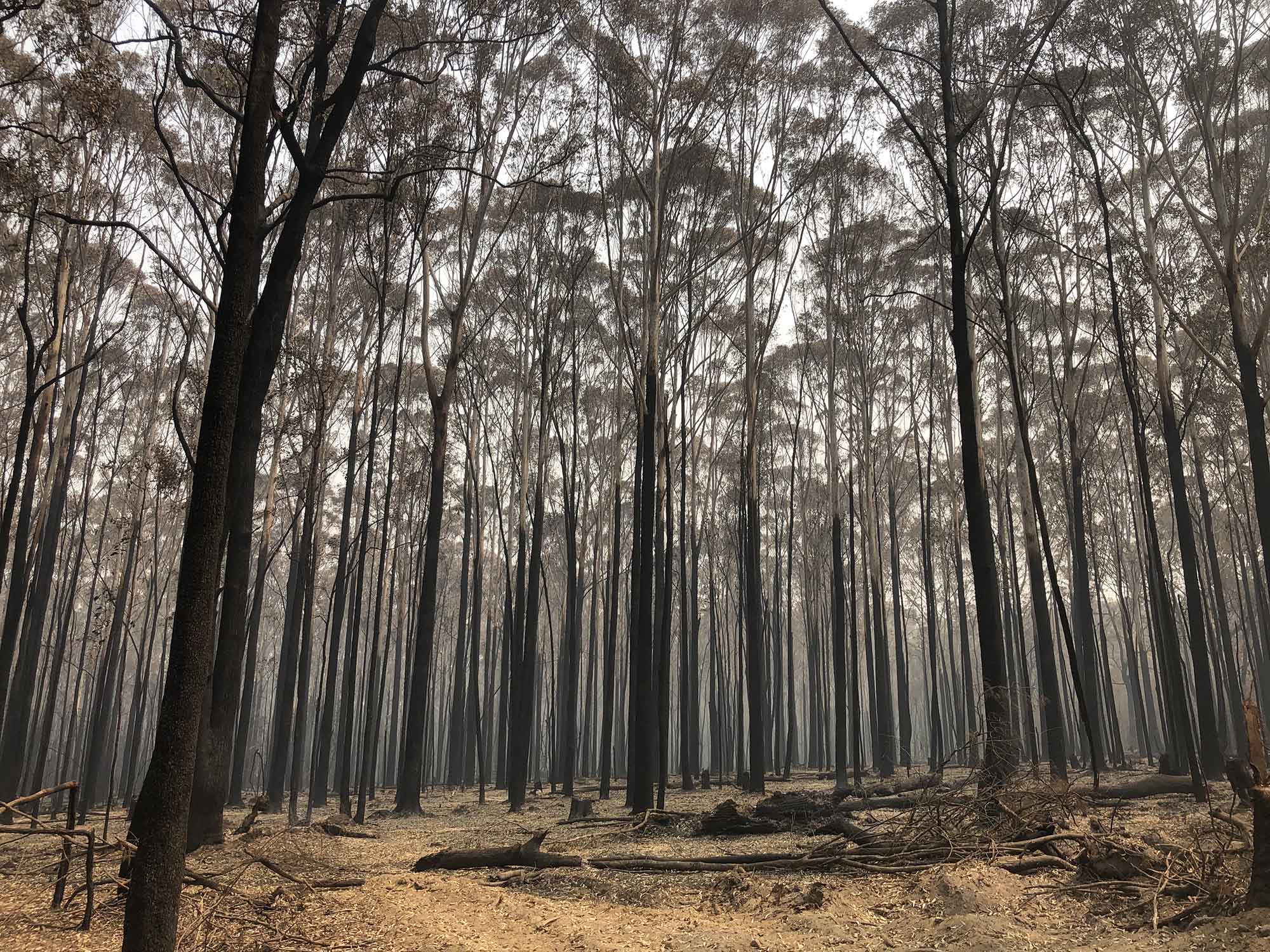 The eerie silent forest where now nothing lives.

In the wake of the devastating, unprecedented bushfires with a long dry, hot summer ahead of us, obvious questions ‘What next?’ and ‘Where to from here?’ are being asked. This is the time to talk about Climate Change and our own back yard.

The community of Australia thanks our fireys, volunteers and services who rallied to fight the fires. The tragic loss of life, homes, properties, forests, animals, wildlife and their habitat is difficult to comprehend.

We cannot keep going on as before. This is a time for our leaders to re-assess, make hard decisions, sit down at the table with scientists, specialists in all fields, to plan and re-set how we’ve “always” done things.

This includes our local council.

The list is long; the Manning River is drying up and not flowing in parts, as well as being more saline. Old trees that have survived for decades along the river are now dying.

Our water supply is a major worry.

There are issues of co-ordination of services and while everyone and charitable organisations pitched in, it seems there is a need for an overall co-ordinating group.

For example the Wingham Golf Club is the only accredited evacuation centre in the Manning Valley. Manager Peter Tait contacted Family and Community Services (FACS) at the start of the local fire week to find out what protocols might be needed, such as bedding, and was told to get all the services needed together, such as extra staff to prepare food and then waited for them to step in. Or so the thought.

“Instead everyone was sent to the WIngham Services Club and Showground and when the Club was full they used the Bowling Club. Which didn’t make sense to me as we have gone to a lot of trouble and expense to set up an accredited evacuation centre. I was told it might have been the police who made that decision. Which didn’t make sense to me. So we stayed open as we were feeding all the fireys staying at our motel. It all cost us money, as we weren’t supported in the loop by FACS, despite being the only accredited evacuation centre in the district.”

The runway at Taree Airport managed to accommodate the big jet carrying Mr Morrison and a couple of associates from Canberra, and also the big black and orange jet carrying Our Glad and around thirteen others which flew in from Bankstown, at vast expense, all for a supposedly reassuring photo op at the Taree Services Club.  Wouldn’t you think they might have all hopped on one plane ???

And did anyone ask the State Premier why she has gutted a million more dollars from Rural Fire and Emergency Services?

Some of that money could have gone to upgrading Taree Airport runway so the water bombers could have refuelled there instead of having to fly to Coffs or Williamstown.

In Harrington 85 year old John MacDonald has been jumping up and down for a long time fighting a proposed development he saw as a potential fire disaster, but which has now been facilitated by Council for the Joint Regional Planning Panel to approve.

“They plan to put 293 little houses on 27 hectares with the boundary at the edge of a forest! It was approved under the wrong fire plan as it is specifically developed for the elderly and people with disabilities. Can you imagine the nightmare of a bushfire there on their doorstep and getting those people out? Not only that, added to the Roche development of 350 people, we are multiplying our population to such a degree that 80 percent of people living here in Harrington will be over 55s. There’s not the infrastructure and they’ll build houses before any facilities. It’s utter madness and it’s illegal in my book,’ he says.

There are no doubt countless stories of near misses and actual tragedies in the unprecedented bushfires which are hard learned lessons. Because there will be a next time.

The argument over back burning has to be addressed.

Indigenous fire management from when tribes lived with nature can not apply to the same degree with so many introduced species of trees and plants, plus different management and regulatory restrictions and laws.

We have to look at where and how we build houses. And how many people can live safely and sustainably in an area?

Despite the political mismanagement and denial, this event is part of a pattern.

The mean annual rainfall for Wingham is 1100 mm with droughts commonplace.

Wingham has been quite a bit drier, somewhere under 400 mm.

So it’s a frightening pattern.

What happens when our diary farms close? When our land is no longer sustainable and drought is the norm? We can’t eat cotton. We don’t want to have to buy our basic commodities from China, and at what cost?

MidCoast Councillor Peter Epov, who had the foresight back in back in June, to put forward the Motion that Council develop a Climate Change Policy and an Climate Action Plan, which was adopted, says,

” I wanted to move the Climate Change motion much earlier, the warning signals that we were heading for a natural catastrophe have been flashing for some time but the politics within our Council were such that it would not have gone through. From the experience of this unprecedented event, it is clear that our communities spread across 10,000 square kilometres are in imminent danger. We now need to move swiftly, to learn from this experience, and be prepared for what is to follow.

Perhaps what we need is Council to convene a local Climate Summit which would include a Natural Disaster component focused on community safety. We need to involve all the relevant key stakeholders such as all the official agencies and authorities, medical resources, the farmers, industry, business and residents.”

Our local rainforests are dry enough to burn.  Eucalypts are falling down after the fire as they have burnt right down into their roots…that’s how dry they are.  The drought is severe.  The last big drought here in 1994 was, no surprise, associated with record bush fires.

World Heritage rainforests are burning in a once in a millennium event. In Tasmania. Thousand year plus old trees and peat, which takes over a thousand years to accumulate, has burned to ash.

So we could well have expected and prepared for what we’re currently experiencing.

Toss in arsonists and psychos and fools plus dry lightning. And it’s not a pretty picture.

The threshold has been crossed. Climate Change was always coming. It’s here. And we’d better prepare for a very different future. Not in the next year or so, not in 2020, but NOW.  In our own backyard.

I have never seen a koala in the wild till last Wednesday night when I stopped my car on Possum Brush Road to observe two blokes putting a badly burnt old male koala in the front seat of their four wheel drive.

I think the headlights and burnt bush at night made his eyes seem far more sad, and he looked like he was just saying, “Shoot me, I’m finished…”

My first koala that I have ever seen in the wild, died Thursday morning.