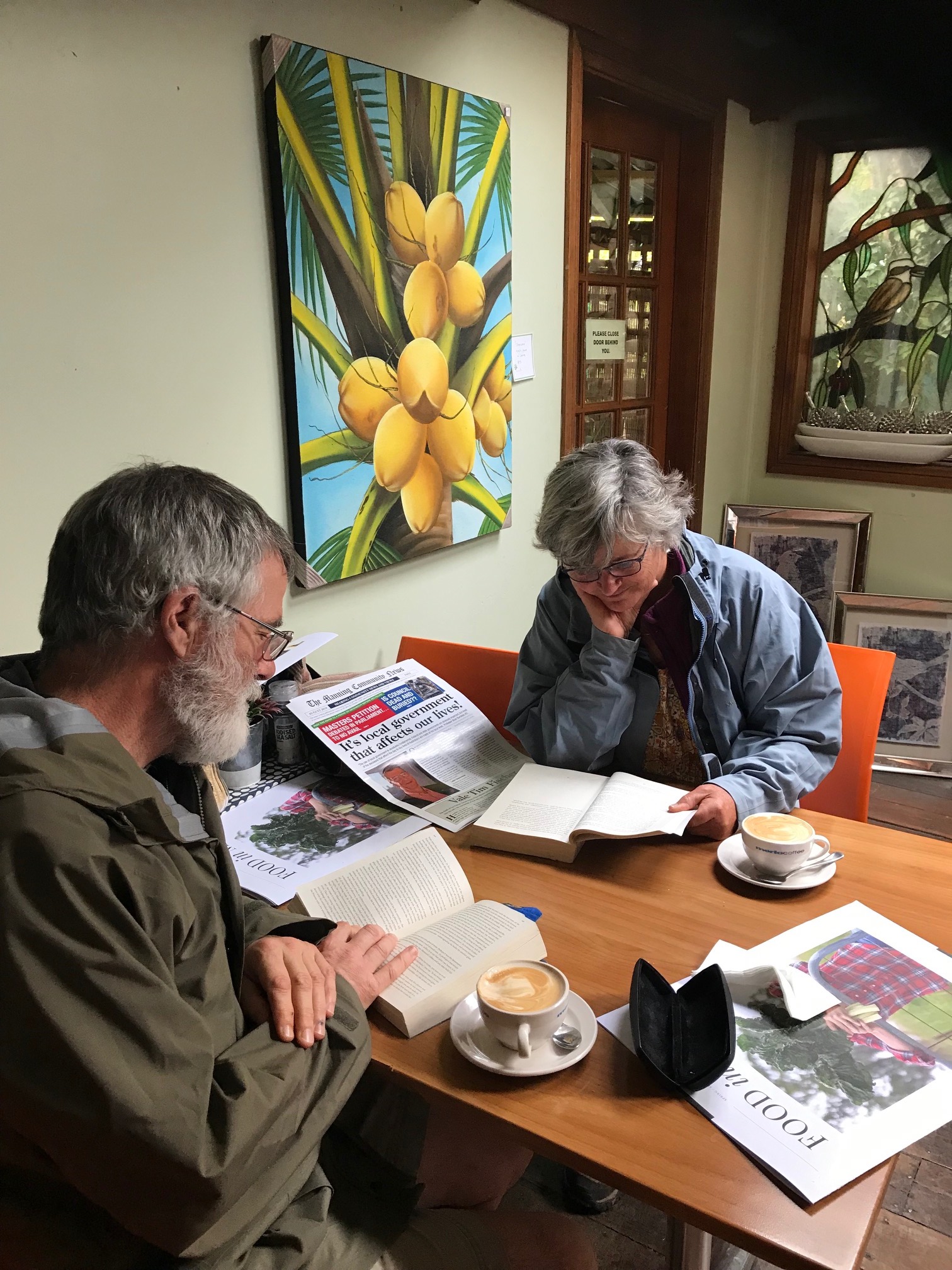 Craig Brown and Jill Pierce from Tassie take a break in Nabiac. We love to see people reading books!!

While having coffee one rainy morning in The Greenhouse at Nabiac, I spotted a couple relaxing over their coffee… with a book. These are my kind of people! I introduced myself  and ended up chatting to Jill Pierce and Craig Brown from Eaglehawk Nest in Tasmania.  I asked Jill to tell us about their travels and she sent the following. . .

“What a pleasure it was to break our journey south at the Greenhouse café in Nabiac, NSW. Staff members were friendly, the coffee hit the spot, and the locally sourced food was delicious. We’d both brought our books into the cafe for a quiet read. The morning had been spent walking at Saltwater River, and chatting in the car as we drove down the M1. Craig and I are nearing the end of a nine week caravanning trip from Eaglehawk Neck in Tasmania.

We drove up through central NSW and Queensland, shocked by the effects of the drought, the dry river beds, stressed vegetation and the lack of feed for stock. It intensified our concern about climate change and global warming.  The current bushfires, that started so early in the season, are also alarming, as is news of unprecedented fires in the Amazon and the Artic.

Being in coal country presented the opportunity to learn more about coal mining, its role providing local jobs, its usage of water and the effect on the environment of mining and burning coal.  Our belief in the need to transition to renewable energy sources has been strengthened. Whilst it is undeniable that coal mining provides jobs, coal is the number one contributor to carbon emissions. 64 per cent of Australians think we should be aiming for net-zero emissions by 2050. (Climate of Nation Report 2019, Australian Institute)

Contacting local climate activists at Frontline Action on Coal in Queensland, we visited their protest camp. Frontline Action on Coal (FLAC) is a movement made up of thousands of individuals and community groups across Australia. We joined the climate and free speech protest in Townsville outside the regional sitting of the Queensland parliament.  A group of concerned citizens- the majority of us over 60 years old- visited Adani’s Abbot Point Port to deliver a letter for Mr Gautam Adani. The group contained doctors, teachers, a carpenter, a social worker and a vet. Our letter clearly stated that Senator Matt Canavan does not speak for us when he promotes and supports new coal mining in Australia.  Direct action is occurring to discourage companies from tendering for work with the Adani Carmichael Project.

More and more people are concerned about the rising temperatures, and resulting catastrophic weather events and fires. Over 70% of the Australian population is against building any new mines. (Australian Conservation Foundation research.) The creation of sustainable jobs for the future is essential- jobs in agriculture, tourism, the service industries and renewable energy production. The more we talk to people on our travels the more we realise our shared concern is growing.

The world is in a climate crisis. A transition needs to be made to non fossil fuels to help reduce carbon emissions. Our political leadership is sadly and shamefully lagging behind most other countries in taking up this urgent challenge. Everywhere people are calling for action. The Climate Strike by schoolkids and supporters is just one example of this call for action. Craig and I joined the Strike to support our children in Melbourne. We will continue to work for action on climate change when we return home.”

As should we all. Thanks Craig and Jill!  Ed.