Is This the Dumbest Deal EVER?

A Good Deal for the Developer it seems! 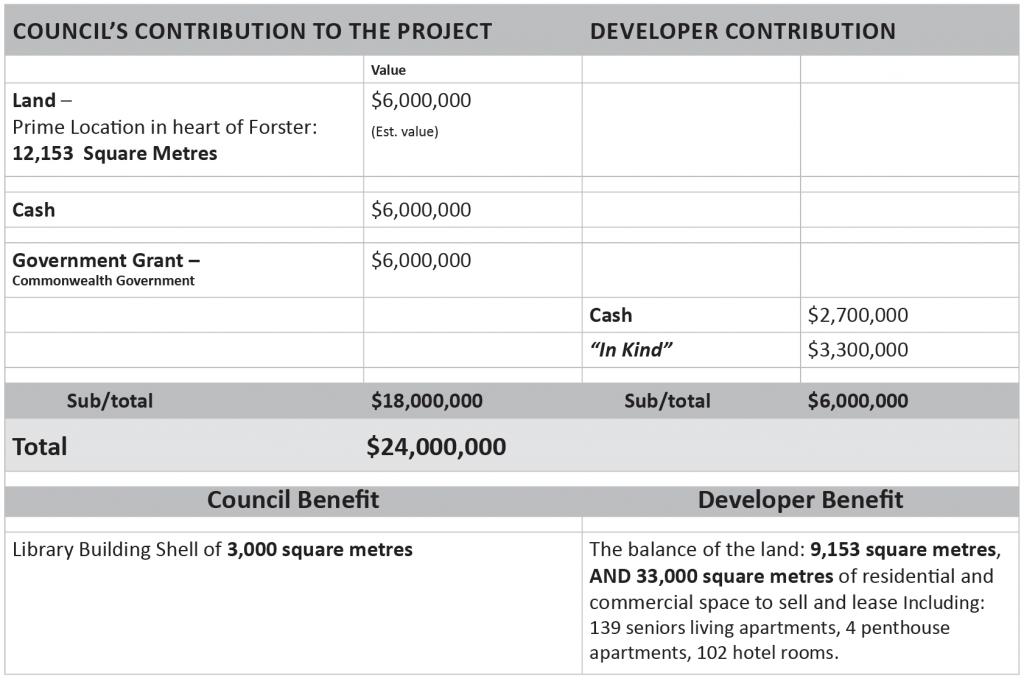 Is the Forster Civic Precinct project, including the new library, the dumbest deal ever for the MidCoast Council? Riskier and more radical than even the Masters Office Centralisation Proposal?

Many in the community have contacted us and are starting to believe this is so and to question what is really going with this project.

The bottom line in this deal is that MidCoast Council is providing the land which is estimated to be worth $6 million, and $12 million dollars in cash (some from a Federal Government Grant) to build and fitout a 3000 sqm library (as part of the overall project development) and the developer contributes $6 million dollars to the library project, of which $2.7 million is in cash and $3.3million is in kind (which Council has refused to publicly quantify in any detail.) The developer then builds the library shell for Council as part of his Stage 1 Tower, after which developer gets to keep the tower, (with the exception of the library) and the balance of all the remaining land, and space, to build, sell and lease 33,000 sqm of valuable commercial and residential real estate in a prime central location, valued at well over at $100 million dollars.

Is this a great deal for Council and does it make any business or commercial sense to anyone? Is this a one-sided deal, or what?

Council had already purchased the land, and had $12 million in cash to build the library, so wasn’t this sufficient to build a Library and then keep and develop the balance of the land of over 9000 sqm metres for other projects? They could have built a new Council Chamber on that site, leaving Masters to be sold or transformed into an indoor sports arena or an entertainment venue or the myriad of other possibilities with that warehouse.

MidCoast Council’s current mission statement found on most of their communications states:

“We deliver benefits for our community in a way that adds value and builds trust.”

Perhaps someone from MidCoast Council might write to us and explain how this project meets this noble objective.

In 2007, a requirement for a new library for the Forster / Tuncurry community was identified. In 2014 Great Lakes Council purchased a block of land spanning 12,153 square metres, for $3 million in the heart of Forster known as the Old School site, on the corner of Lake, West and Middle Streets.

We understand from one Councillor that the former MidCoast General Manager, Glenn Handford, had boasted back in 2017, that the land was worth at least $6 million.

Strangely rather than building the library itself, in 2017, MidCoast Council decided to partner with a family trust, the Graham Dong Family Trust, to construct what has become known as the Forster Civic Centre, which would accommodate Council’s new library.

A rather complicated Development Agreement has been published on MidCoast council’s website.  The trustees of the Graham Dong Family Trust are Mr Coyne Graham and M/s Margarette Dong.  In addition there are two other key players in this project, the developer – Enyoc Pty Limited. Note – “Enyoc” is the reverse spelling of Coyne (perhaps Coyne Graham?) and Kukas Brothers Pty Limited as the Builders.

However we understand that Kukas Brothers may now no longer be associated with this project as builders.

Our research earlier this year revealed that allegedly Kukas Brothers Pty Limited building licence had expired on 6 December 2018 and had not been renewed at the time. Apparently there was speculation in February 2019 that Council may have issued a stop work order on the site as a Construction Certificate had not been issued.

Enyoc Pty Limited is associated with the owners and operators of the Evermore Retirement Living facility at Bruce Street, Forster.

Did Council carry out any probity checks on any of the key players?

A Q&A on MidCoast Council’s website issued in May 2017 stated that:

“At the appropriate time, Enyoc will seek investors and financiers to fund the project.”

We understand that earlier this year the developer may have had some difficulty in finding “investors and financiers” as a number of contractors had complained about payments and the project appeared to be very slow getting off the ground despite the beginning of construction.

The imputation being that the entire project is now on time and to budget which frankly, is yet to be established, as according to Council’s own published documents the entire Stage 1 is to be completed by mid 2020.

This Stage 1 not only includes Council’s library but 53 residential units above the library, offices, a restaurant / café and a residents club.

We understand that the Development Agreement provides that ownership of the land is to be transferred to the developer before the warm shell of the library is complete.  (ie. Cold shell / warm shell are building terms. It’s a term used in Council’s contract with the developer published on Council’s website. It means once the building has been fitted out with electricals and services ready to occupy.)

Council has not required the developer to put up a deposit for the majority of the construction period.

Council has not provided any financial information in relation to the costs to fit out the ‘warm shell’ of the library. In an email obtained under Freedom of Information, Council’s consultant’s Montlaur Project Service have indicated that:  “a typical fitout within the building (referring to Masters) would then add $1,500 – $3,000 per square metre”. The library space will be 3000 sqm.

Can MidCoast Council tell us what the “In kind” contribution of $3.3 million from the developer will be?

Sounds a bit wobbly to me. What do you think?