The secret society of Luderick hunters 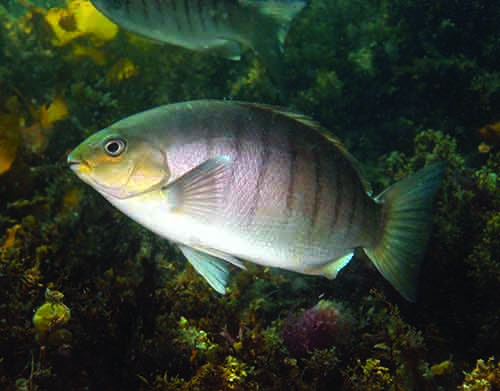 In an annual procession, that has been happening for as long as I can recall, luderick (sometimes called Black Fish) and bream follow the mullet on their northern spawning run along the beaches and into the estuaries.

Named “ground fish” by the local commercial fishers, the movement of luderick into Port Stephens is followed far more closely by an increasing number of recreational fishers. The practice of fishing for luderick off ocean rock platforms, bridges, jetties and breakwalls is growing in popularity.

There is no better spot than the Nelson Bay Breakwall which becomes a hive of activity when the luderick arrive in town. (You might have your own secret spot up your way, of course.)

To those who have not witnessed the methods used by recreational fishers, you could be excused for thinking that some type of ancient ritual was in place when you see these keen fishermen set out.

Experienced luderick fishermen are very well organised. They can be seen pulling a trolley along the breakwall complete with rods, tackle boxes, sand buckets, long handled landing nets, multicoloured floats and the all important, bucket of “cabbage” to be used for bait. No, not that cabbage. Sea cabbage, which has been gathered off the ocean rocks at low tide. Some prefer to call it “green weed” but this bait is collected from secret swampy water holes and around rocks. It’s all a bit mysterious.

But it’s a “club” with many members, and not just the old timers! And probably every one of them has their own “best method” to land and keep their fish fresh until it lands in the pan.