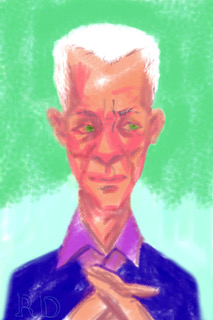 Portrait of Robert by CHONG

Admired and respected  Australian writer, Robert Dessaix dropped in to see us and said he is writing his next book and mentioned he’d like some suggestions from “readers of a certain age”!

‘The idea,’ said the British anthropologist Ashley Montague, ‘is to die young as late as possible.’  Which, alert and vivacious at 94, he more or less did.  He was certainly a witty, playful man – after all, he was born Israel Ehrenberg but changed his name to Montague Francis Ashley-Montagu (no ‘e’ in the surname) – and was clearly old for a long time, but did he have a good old age?  Is there such a thing?

A friend of mine and I, neither of us young any more, sat talking about ‘a good old age’ recently over lunch. What, she wanted to know, could possibly be ‘good’ about being old?  (She wasn’t complaining, just observing.) I stared across her garden and the fields beyond to the Manning River – water always helps in these situations – and contemplated the question.  The French, being French, call it une belle vieillesse – a beautiful old age.  That’s closer to what I’m aiming for, I think.  Not a beautiful face (I want a lived-in face, a face that tells a story, not a cosmetically preserved face, although we all like to look as if we’re looking after ourselves), but a beautiful old age.

Beauty is something that happens.  It’s not a vase, a face, a view or a thing.  It’s the enlivening of the self that happens in the presence of something sublime (and often old).  What we want, I think, is an enlivened, even playful old age.  It’s assumed by almost everyone these days that the aged want a tranquil old age spent surrounded by other tranquil, old people.  Where on earth did this extraordinary idea spring from?

‘That’s all very well,’ my friend said, passing me some truly beautiful cheese.  ‘What frightens me is the thought of being incapacitated.  Pain, of course, incontinence, and losing my mind, but above all being incapacitated, spending years unable to walk or look after myself.’

I know.  I’ve seen it often enough in my own family.  We die more slowly than we did when I was a young man.  We are unwell for a lot longer.

My friend will never suffer from another common source of distress amongst the ageing: loneliness.  It’s amazing, when you visit the really old, the old old, how many of them feel wretched from loneliness. Sometimes everyone close to them has now died, sometimes they forgot to practise being a good friend – and being worth befriending – when they were younger.  My friend won’t have that problem.  She’s been practising for decades.  Nor will she care about being invisible.  She knows she’s there in a thousand ways.

Old age in every society is fraught with these dangers.  It is unlikely that any of us will come to the finishing line completely unscathed.  Still, there are good things about being old, if you have the wit, and perhaps courage, to explore the possibilities.

In old age you can actually play more, or, as Ogden Nash put it: ‘You’re only young once, but you can stay immature indefinitely.’  At a certain point in life, you can be a kid again: live from day to day, take responsibility for very little, speak your mind, take intense pleasure in every single thing that happens to you during the day (the colours, the smells, the sounds, the faces, the conversations, the sudden newness of everything) and stop pretending to be what you are not.  By the time you are old, you know what makes you happy.  If you don’t know, starting thinking about it now.  Stamp-collecting, reading, making love, breeding dogs, looking after your grandchildren – whatever it is, do it.  After all, days are to be happy in.  Be good in them, too, if you like, and indeed it’s difficult to be happy if others are miserable, but above all be happy in your days.  (I travel and spend time with friends.)

But – and there’s always a ‘but’ – a happy old age is impossible if you’re empty inside – everyone seems to agree about this.  Confronted by dementia, gammy legs, arthritis, deafness, blindness, heart disease and a face like an old boot, what will see you to the finish is a rich and deep inner life.  It’s not a thing, it’s a dance. The last years go quickly.

Life is, as has been noted before, remarkably like a toilet roll: the nearer the end, the faster it unwinds.  Start dancing your inner life now, without delay!

Robert is currently writing a book on ageing well and would welcome comments from readers about the things they enjoy about being older.
Write to: robert.dessaix@internode.on.net