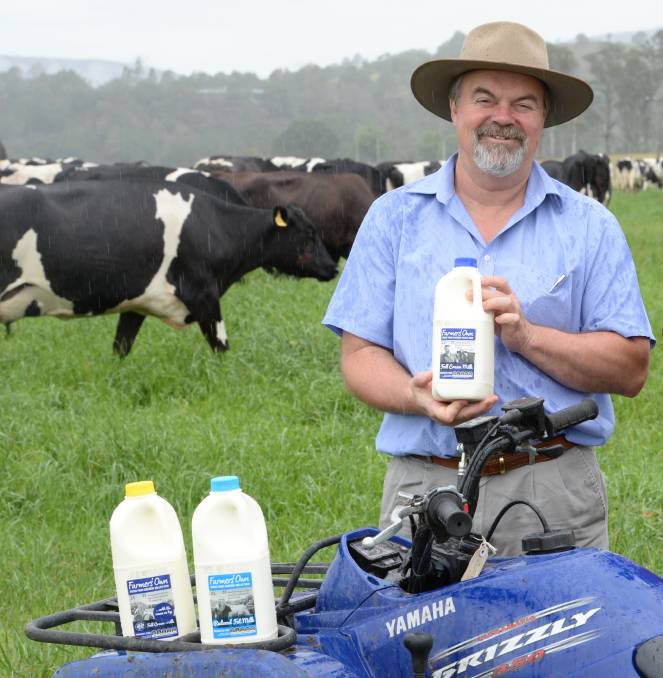 What Is the Future of Our Dairy Industry?

He speaks with authority as he is a dairy farmer from Stewarts River and farms 400 acres, milking 280 cows, and with wife Julie and good staff they produce 2.3 million litres of milk a year. Tim holds down a day job managing LJ Hookers Real Estate in Wingham.  But his passion and pride has been developing the local brand, Farmers’ Own, and selling it into Woolworths nationally.

The milk price rise of ten cents a litre at Woolworths has been a slight improvement, if long overdue. He points out however, that money only goes to the farmers who are supplying that contract, so the processor, Parmalat based in Victoria, who has the Woolworth’s contract, will only pass on the 10c a litre to their suppliers which they’ve been doing already under the drought subsidy scheme. Adds Tim, ‘However the farmers don’t get a full 10c as it’s divided up into the total volume. So if a processor is supplying 50 percent of their milk to Woollies then that will automatically halve  the price going back to the farmer. This affects over a 100 farmers in NSW but locally probably only affects 16 or 17 farmers who are within an hour radius from Taree, although there are approximately 160 dairy farms within our Council area.

We Need A Local Processor

‘We have six different processors that take milk here now – Saputo (which used to be Murray Goulbourn),  Paramlat, Lion, Norco, the direct suppliers to Woolworths, and Real Milk at Wauchope/Hastings. The other processors pick up in our area, but we only have Real Milk at Wauchope as our nearest processor. All the rest are in Sydney and but most milk goes to Brisbane to be processed,’ says Tim.

His dream for our area is to set up a milk processor here to cater for our local milk supply as well as other markets.

‘It’d be like winning the lottery if we had a processor here in our area, but the cost is astronomical. But it’d be worth it. We’d be looking for suppliers in our area an hour to one and a half hour radius which takes in Kempsey and Bulladelah outlets,’ adds Tim.

He is looking to especially process A2 infant baby formula and maybe A2 milk which is popular, as well as infant powdered formula, which would go for export as well as supply local outlets. Tim points out that this market in Australia is worth 60 million dollars. ‘Everyone is trying to get onto the China bandwagon when there’s actually a good market locally, as well as Vietnam, Indonesia and India.’

Tim also considers the boutique dairies on the other side of the market. ‘You see a farmer who’s trying to have a go, then he goes into Coles or Woollies competing with the big guys which is very difficult. Consumers see milk in there for a 1.10 while the farmer’s trying to get 1.60 for a litre. People have to be really sold on the idea of this being a boutique buy to pay that extra. When they broke the milk down to a dollar then everybody else has to try and compete with that dollar a litre milk. The dollar might not affect the farm gate price but all the other ramifications do, the onflows.’

The Manning Valley has the advantage of being associated with clean, green, healthy food, naturally. Which was the image that Tim pushed to create the local dairy brand, Farmers’ Own.

He explains how the other handlers can make money.

‘Milk has to be only 3.2% butter fat. So if I supply milk and its 4% butter fat, I’m giving that extra away for nothing. So they’ll skim my milk and take that fat out and drop it back down to 3.2% fat then they’ll add powder to increase the protein, as by skimming it they might have dropped the protein too far below the three percent, so they have to add milk powder or whey to increase the protein content to get that right. That cream taken out would go into their own branded products.  That’s why cheap milk tastes watery. Unlike our milk that comes out of the vat full cream and bottles of full cream have the thick layer of cream on top!’ He adds, ‘Norco has now started standardising due to rising cost pressure.

The Manning Valley Fresh Group’s milk and is sold in every Woolworths’ store in NSW, guaranteed fresh from the Manning Valley. Adds, Tim, ‘Farmers’ Own is the only true milk that you can trace back to the farm. All the other milk is all going to Brisbane. You can buy milk that’ll have pictures of local farmers on them, but I bet you that milk will have come from Victoria. The local milk that Saputo picks is sold on the wholesale market to Parmalat and is trucked to Brisbane.

‘The wholesale market is a real can of worms. It’s what’s killing the industry because factories can go and order a truckload tomorrow then not order any the next day. Whereas with farmers’ supplies we have to keep picking up whatever the farmer has in his vat. Not buy it just when it needed. If you ring up and say I want 35 thousand litres tomorrow then that makes it very easy for the farmers. We want factories to realise that if we don’t have farm supply, we don’t have security of supply. And now Coles is discounting cheese so that’s as bad as discounting milk.’

Tim knows the struggle dairy farmers face, but adds, ‘The resilience of farmers to keep working and looking after their farms and animals is enormous.  But you can’t have resilience without productivity.  Nor environmental protection either. What farmers earn they put back into their land as well as the local economy.

‘Nowadays   farmers are disillusioned, they’re getting out of the industry in their 50s and their kids don’t see much of a future. And their parents don’t want them to take over because they don’t have the same philosophy of working long hours with no breaks, for nothing.

‘However, if we get a processor up here it would be a massive injection for everyone. We’d be paying round 65 cents a litre and the difference between 55 cents and 65 cents a litre, door profit, looking at say, a million litre farm, is, in round numbers, a hundred thousand dollars.  And you’ll find that a typical farmer spends all his money – so the farmer’s profit goes into the local community. And with a 160 dairy farms up here, well, those millions of dollars will be injected straight into local businesses.  Farmers buy and invest in capital infrastructure, machinery things like that, which all goes around in the local economy too.’

With 40 something years in the dairy industry, Tim has been trying for 18 years, promoting, pushing, persuading for better services and production-  but mainly to establish a local processing operator.

‘I can’t see myself stopping but I’ll bat on hoping to see this project of a processing plant here get up. Council is on side.  If it doesn’t work out, then I guess we’ll have to try something else.’

He says the farmers are sitting tight, some rather cynical as they’re just over it, and don’t believe it’ll happen until it does.

Adds Tim, ‘The industry is ready to either explode or implode. Something has to happen. The average farm is getting 53 to 54 cents a litre for their milk and their cost of production is 55 cents, so that just doesn’t work.’

So let’s drink more milk. Farmers’ Own of course!