The people have their say 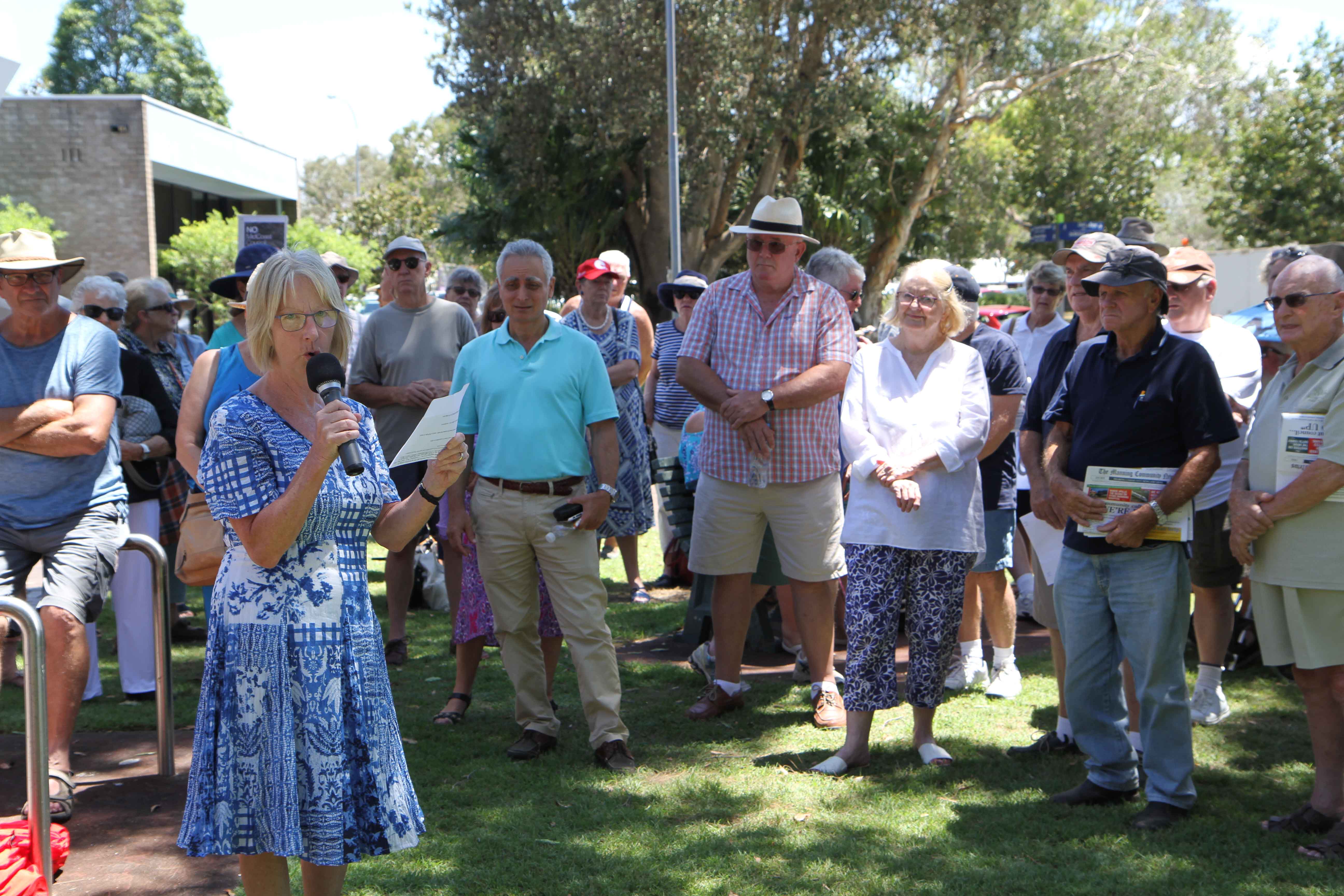 Christine Stanton from Tinonee addresses the crowd before the council meeting

While there were hundreds of people who would have liked to say a few words to the full Council at the meeting at Forster, February 6, seven people spoke passionately about their opposition to the Master’s (Biripi Way) Project.

Below are some extracts, Paul Van Drunen and former Gloucester Mayor, John Rosenbaum, also spoke, as did Mike Deignan (see his report on page one.)

They were allowed three minutes. To the second.

“Council has “had the chance” a thousand times over to include the community but the community can’t see anything other than a clear and deliberate lack of will in doing so.

How can we understand things like a nebulous “cultural transformation” saving of $76.2 million without dialogue?
You know, our community includes people who have held executive positions in both the public and private sectors. People who have experienced corporate or government mergers. People who have discovered from experience that a distributed workforce and a teams-based approach is a viable solution to creating harmony in a blended organisation.
Rivalries will inevitably exist when mergers happen but herding the workforce into the same cage can easily result in the office culture equivalent of close quarters hand-to-hand combat. For every consultant who says this will save money you’ll find another who will say it won’t.
This is not a trivial project. This is tens of millions of dollars of public money and projects of this scale deserve a mandate, not a bulldozer.

And it’s not just the money. This project has the potential to fundamentally change the way in which Council integrates with the community and is not something that can be easily undone if it doesn’t quite work out. There’s no going back.

We have reached a tipping point.

Councillors can either choose to start taking the community with them or choose to continue driving the wedge between Council and the community even deeper … until the weight of public opinion topples the tree.”

Andrew Keir was the Network Administrator for MidCoast Water. He is now retired.

“There is a juggling act for Council to meet the expectations of vibrancy and community wellbeing but by and large as clearly stated in the Community Plan which forms the basis for strategic planning, the community priority is roads and bridges.

With that in mind, I have concerns on the impact of the Biripi Way proposal on future borrowing capacity and whether the forecast capital works for not one year but going out to 10 years has been factored into the decision on Biripi Way proposal.

The projections on debt servicing ratio have been based on the lowest interest rates in living memory.

One only has to look at Item 8 in the Council agenda where two maturing loans for the water division have come off over 8% interest rates to be re-written at 5 year fixed at 3.22%pa

Can Councillors tell me what the interest rates will be in 5 years time and what the impact interest rate shifts will have on this 16 million loan and debt servicing ratio?

I might add that the former board of Mid Coast Water would be shuddering at the thought of 2million being pulled from reserves for this project that was earmarked for debt reduction as loans matured.”

Mr Tickle was first elected to Greater Taree City Council in 2004 and served until the amalgamation was announced. He was also Deputy Mayor at that time, & Deputy Chair Mid Coast Water. He served on Financial Committee for both entities and Internal Audit for Mid Coast Water. He spoke on behalf of the Halliday’s Point Progress Association.

“Councillor Pontin’s motion moves that “all subjective savings associated with staff culture change be excluded from any cost benefit analysis.”   It should not have been included in the first place since culture change comes from leadership.  You cannot believe that moving everyone under one roof is going to effect culture change unless you change the leadership.  It’s likely to make things worse, when people do not want to leave the environment in which they work now.

Please consider this; when the $76 million is removed from the savings, the total savings for consolidation would come to $26 million.  When that $26m is compared to the campus model savings of $15m, you have a difference of $11m  (the savings figures are in the Savills report).  Why is it worth spending upwards of $36 million in order to save $11 million over 20 years?  It just doesn’t make sense.”

“Why did Councils Engagement process with the community go so terribly wrong?

The Flyer/Survey was treated as Junk! This was the first Community Consultation and Engagement put by Council on this issue. The ‘survey’ was blatantly biased, the scope of the questions was too narrow and did not address the burning questions the community wanted to have their say on.

The flyer/survey was poorly designed and distributed – if at all received.

It was late being distributed preventing Q&A session dates/locations included in the Flyer to be advised in a timely manner.

51,200 hard copy flyers were not received by the community. A Facebook question was put to the community by Council asking to comment and your location if you did not receive the flyer. Within 48 hours of the post the responses of NOT RECEIVED from all areas of the MidCoast Council community area reached 493.

Only 110 hard copy flyer/surveys were received by Council and the overwhelming majority were opposed.

Only 224 on-line surveys were received by Council and the overwhelming majority were opposed.

30 written submissions were received by Council and the overwhelming majority were opposed.

MidCoast Council has access to our entire community data base for Rates Notices and email addresses. It was a serious failure by Council not to utilise this data base to personally distribute a community worthy survey, sent with the last Rates Notice on 19 Oct. 2018. MidCoast Council avoided a genuine unbiased, transparent, accurate information flyer and survey opportunity by not asking their community the question most wanted addressed. This question is “Do you support the purchase of the Masters building and the development fit-out of a Centralised Administration office for 350 staff?”

The question now posed is, what will Council do with the reported outcomes from their failed community consultation and engagement? Will Council act on the feedback or yet again completely ignore your community?”

Katrina Pearson is the organiser of the NO Move to MASTERS.