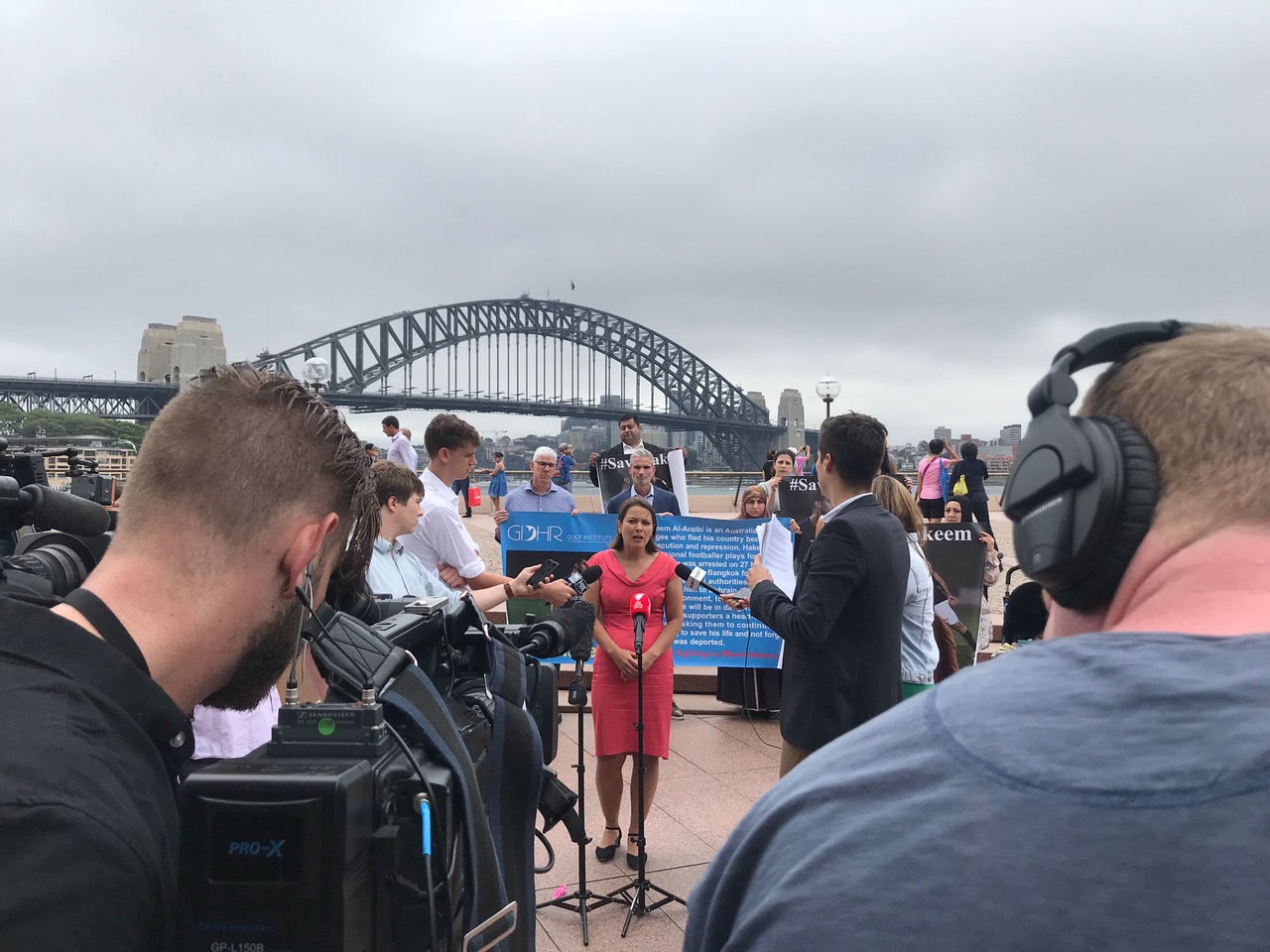 Elaine Pearson speaks at a rally to support Hakeem

Recently, with the world watching, Thailand did the right thing and took action to protect a vulnerable 18-year-old woman Saudi woman, Rahaf Alqunun, and stopped her forced return to Kuwait. She has been given refugee status by Canada.

Right now, there is another young man in Thailand at risk of forced return to Bahrain, where he faces torture and wrongful imprisonment.

When a Pascoe Vale football player and former Bahrain national team member Hakeem al-Araibi and his bride left Melbourne on a honeymoon to Thailand, little did they imagine that Thailand would send a squad of police to arrest him as he got off the plane, detain him in a Bangkok jail, and threaten to send him to Bahrain. Currently in detention waiting for Bahrain to file a formal extradition request to Thailand, Hakeem says he is determined to fight against being forcibly returned to Bahrain.

The facts are Hakeem is a recognised refugee and permanent resident in Australia with just months left until he becomes a citizen here. He says he checked with Australian government officials on whether it was safe for him to travel and was told “yes.” So, he applied for a Thai visa and got on the plane believing he was protected from the Bahrain government that has been pursuing him with bogus criminal charges since 2014. Hakeem mistakenly assumed he was safe.

Given Australia’s problematic policies regarding asylum seekers and refugees, their granting someone refugee status is not an issue considered lightly. Hakeem was traveling on an Australian issued refugee travel document; the integrity of that document and the principles of refugee protection underlying it extend to all governments that accept refugees.

Hakeem’s case is rapidly becoming a cause celebre in Australia and beyond, with the Pascoe Vale Football Club that he plays for in Melbourne, the Football Victoria league, the Professional Footballers Australia (PFA), former Socceroos captain Craig Foster and others leading the demand for the Australian government to “Save Hakeem.”  World football’s influential Fédération Internationale de Football Association (FIFA) has taken the unusual step of calling on Thailand to allow Hakeem to return to Australia, under the federation’s new Human Rights Policy.

Hakeem faces a 10-year prison sentence and a grave risk of torture if Bangkok sends him to Bahrain. He is at particular risk because according to Hakeem, he crossed a very influential man, Sheikh Salman bin Ibrahim al-Khalifa. Sheikh Salman is a member of the Bahraini royal family, the current president of the Asian Football Confederation and a member of the FIFA Council. Before that, he was the head of Bahrain’s national football federation. Sheikh Salman was a top contender for the post of FIFA president in 2016 until his candidacy ran aground on allegations that he was involved in identifying athletes participating in 2011 anti-government demonstrations in Bahrain that were brutally suppressed. Hakeem was among the players raising those concerns.

Hakeem says he suffered torture at the hands of Bahrain officials in 2012. In 2014, he was sentenced in absentia by a politically controlled court to 10 years in prison on charges of vandalising a police station. Minutes before the time of the supposed crime, Hakeem was playing in a live, televised football match, and it would have been virtually impossible for him to arrive at the scene of the crime at the stated time. Shortly after his sentencing, Hakeem fled to Australia.

Thailand should seriously consider Hakeem’s previous bout with torture and its obligations under the United Nations Convention Against Torture, which the country ratified in 2007. Specifically, article 3 of that convention states that “No State Party shall expel, return (‘refouler’), or extradite a person to another State where there are substantial grounds for believing that he would be in danger of being subjected to torture.”

Both the UN refugee agency and the UN human rights office have stated that sending Hakeem to Bahrain would constitute a serious human rights violation.

Bangkok should expect the international pressure to mount as more football players around the world, backed by football’s powerful global union, the World Players Association, join the call for Hakeem be returned to his wife and home in Melbourne.

Australian Foreign Minister Marise Payne has  called for Hakeem to be immediately returned to Australia.

With national elections in Thailand just around the corner, the military junta, in power four years, has a clear choice: Does it want to be seen as a rights-respecting government that upholds the rule of law? Or does it want to be viewed globally as a regime willing to break with international rights principles and cut deals with abusive governments at the expense of the lives of refugees like Hakeem al-Araibi?

This article first appeared in The Nation newspaper, Thailand.