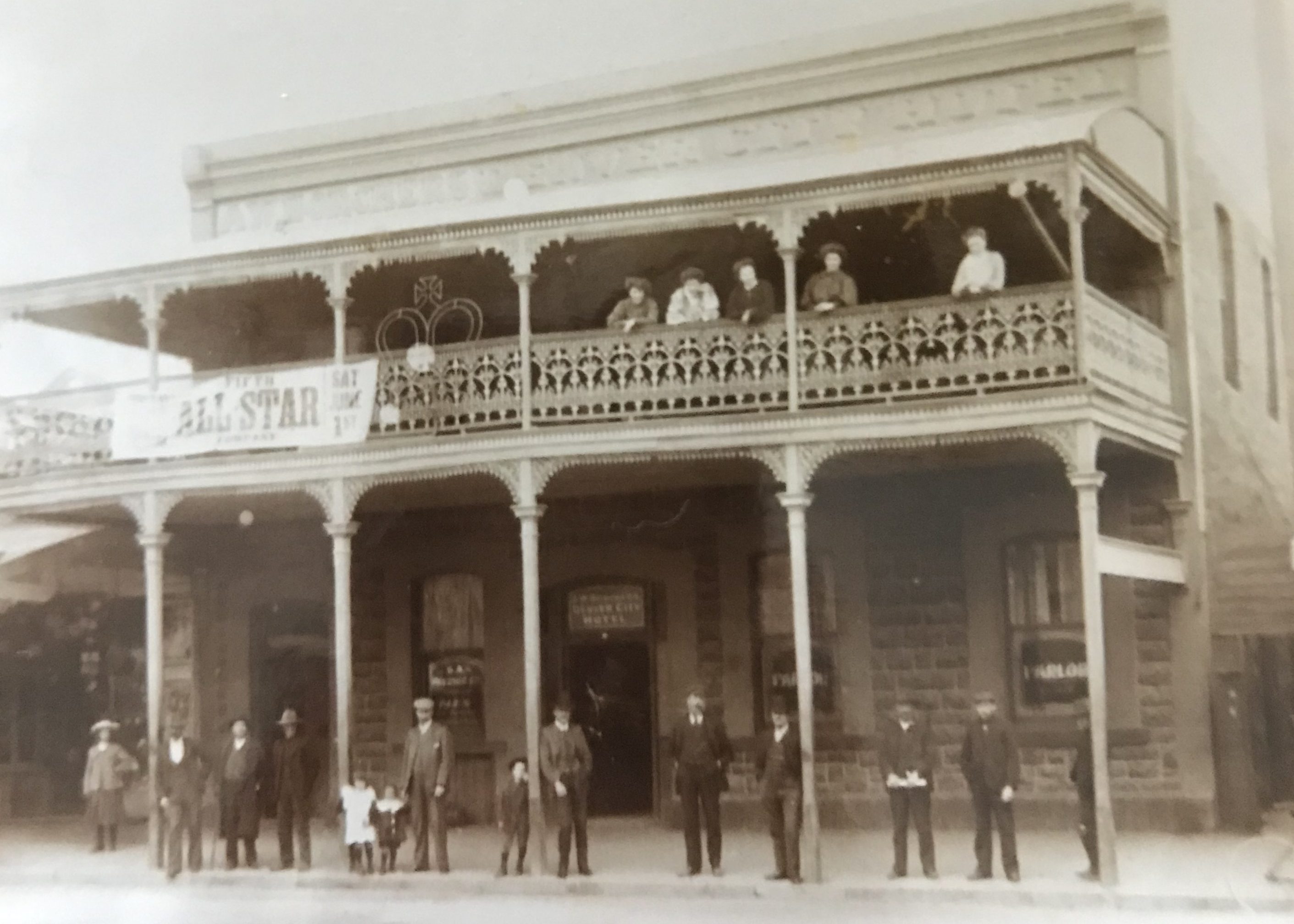 ‘Denver City Hotel’ in Broken Hill, which my grandfather owned from 1904 to 1909

January 1, 2019 marked the 104th anniversary of a fatal attack on a picnic train at Broken Hill, in outback NSW, which was the scene of the first terrorist attack on Australian soil.

On the morning of the attack excitement was mounting among the good citizens of the isolated city of Broken Hill as they flocked to board two trains; one organised by the Manchester Unity Order of Oddfellows, the other by the Caledonian Club, which would convey them to Silverton, once a roaring mining town, a distance of 26km away, for the annual family picnic.

Passengers were assembled in open carriages normally used for transporting iron ore and they were seated on wooden planks, so it was fortunate there was no chance of rain on what promised to be a very hot day.  Anybody who was anybody in Broken Hill was on board the train that day for an outing which was eagerly anticipated all year.

The war raging in Europe seemed to be a very long way away.

In the meantime, an ice-cream cart flying a Turkish flag, pushed by two occupants of the local Afghan camel camp, Gool Mahomet and Mulla Abdulla, arrived at its destination, close to the railway line on the outskirts of the city.  The men settled themselves into a trench containing the Umberumberka pipeline and waited. As the train drew level the men opened fire on it at random with their vintage Snider and Martini-Henry rifles.

The two ‘Afghans’ with their ice-cream cart were a common sight in Broken Hill and were well-known to the locals on the train. Nobody paid them any attention until a young girl, Alma Cowie, slumped forward with a shattered skull. The second fatality occurred when William Shaw was caught in the line of fire and the third victim was Alf Millard, a pipeline inspector, shot as he rode his bicycle between the train and the gunmen. Eight civilians were injured and First Class Constable Robert Mills was shot in the groin and thigh.

The assassins then relocated to a place known as Rocky Hill, where they fired on the unfortunate Tom Campbell, through the door of his small, stone hut. The injured man was able to stagger to the relative safety of the Allendale Hotel, from where authorities were alerted to the attack and pandemonium ensued.

Police, militia and civilians were issued rifles and ammunition from the military depot at the Barrier Boys’ Brigade in Oxide Street.  Rifle Club members swelled the numbers too. As the police were heading to the scene at breakneck speed, one of their cars broke down, in a style reminiscent of the best of the Keystone Cops, so the six men were forced to complete their journey squashed into the one small vehicle. By the time they reached the relative safety of the Cable Hotel the townsfolk had formed a posse and reinforcements arrived to join in the fray. The gunmen were hunted down and shot in a place known as ‘White Rocks’, which is part of the Heritage Trail today.

Hundreds of rounds of ammunition were fired off before one of the attackers was killed but this did not deter the other from fighting on.  One further victim fell during the exchange of fire. Jim Craig, who lived nearby, decided in his infinite wisdom, to chop some wood, four hundred yards from the scene of the action, when a stray bullet hit him in the stomach, which proved to be fatal.

The assassins, as it turned out, were Turks, not Afghans.  Three days after the tragedy, a miner found three documents beneath a rock, one of which revealed a motive for the attack on the train, which was an application by Gool Mahommed to join the Turkish army on which he had written: ‘I kill your people because your people are fighting my country’.

Fear gripped the people of Broken Hill that afternoon as rumour mounted upon rumour. It was soon believed that hundreds of armed Afghans were preparing to attack the city. At eight o’clock that night an angry crowd gathered in the main street determined to avenge the morning’s outrage and they were baying for blood.  One man cried ‘Afghans or Turks, there’ll all the bloody same, let’s kill the lot of them!’ Someone else said it was the Germans who put the gunmen up to it.  There was a small German club in town, which happened to have closed when the war began, but the crowd surged towards it and a stone was thrown through a window, which was a signal for a general attack and the club was soon razed to the ground.

Repercussions throughout Australia followed swiftly as the nation was jolted out of its comfort zone into reality as the government was about to send ‘the cream of our young nation’ to Turkey to fight ‘a war to end all wars’.  As a result of the attack on the train, a total of eleven aliens were arrested: 6 Austrians, 4 Germans and a Turk who were put on the train and told to leave the city for good.  Three months later the Australians and the Turks met head on at Gallipoli.

My Dad’s sister, Rita, told me that the degree of hostility towards her and her three siblings was increasing when youths they thought they were their friends, threw rocks at them one afternoon as they were walking home from school.  It was only later that they realised that it was because they were conversing in German and Australia was, after all, at war with Germany.  I suspect it would have been after this incident that my father, Frank and his sister, Clare, the two oldest in the family, were sent to their grandparents’ farm at Balhannah, in the Adelaide Hills and did not return home until the war in Europe ceased altogether in 1918.

In 2003 as I was sitting in the Outback Library, reading their excellent document on the subject, ‘Attack on the Picnic Train’ compiled by librarian Brian Tonkin, it began to dawn on me that my father and his family were probably on the train that day, although I had never heard of the incident until that morning. Brian Tonkin told me his family was certainly on the train.

My grandfather, Albrecht Wilhelm (Alb) Borchers was proprietor of a hotel in Broken Hill called the Denver City in the main street, from 1904 until 1909, which is where my father was born, along with his brother, Eric and sister, Rita.

In 1909 the family moved to Greenock in the Barossa Valley, where grandfather was proprietor of the Greenock Arms Hotel and where the climate was more moderate. Unfortunately they lost everything they owned in a massive flood in 1913 and Aunty Rita told me that she had a vivid memory of sitting on the window sill in the bar watching the floodwaters swirling around her as a big pig floated past with its legs in the air.

Grandfather was born in Hahndorf in the Adelaide hills in 1874, where his grandfather, Carl (a silver miner from Clausthal-Zellerfeld in the Harz Mountains in Hanover, Germany, who emigrated in 1845) ran a blacksmith shop. In his youth, my grandfather had completed a blacksmithing apprenticeship here but obviously decided that hotel-keeping was a more enjoyable pursuit, especially as two of his brothers had died in that smithy. Grandfather was proprietor of the Union Hotel in Hahndorf followed by a stint at the Angaston Hotel, which is where his first wife, Alma Windschied, died of pneumonic complications after childbirth in 1903. Grandfather re-married Selma, a daughter of Tanunda butcher, Gottlieb Wilksch, and soon after my grandparents moved to Broken Hill with their daughter, Clare.

After the disastrous Greenock Creek flood in 1913, grandfather managed to secure a job as a blacksmith at the South Mine (the British mine) back in Broken Hill, so he the family returned to its old stomping ground and remained there living in a small cottage in Merton Street until 1922. In a brief biography of grandfather in a book about the Hahndorf Academy, where he was a student, the author, Reg Butler, pointed out that ‘During the war, Albrecht Borchers had to keep his German origins quiet in that fiercely patriotic city’. ‘Your father did not speak English until he went to school’ Aunty Clare told me, long after dad had died, just another bit of family history about which I was completely ignorant.

In 2004 I put the question of our family’s involvement in the picnic train attack to Dad’s only remaining brother, Ray, who was born in Broken Hill in 1918, happily after the war. ‘Oh yes’, Uncle Ray casually told me, ‘Mum used to talk about it often, the whole family was on the train that day’.

Clearly my grandmother didn’t talk about the Broken Hill picnic train in front of me.

I followed up on this revelation with my cousin, Judith Eley, whose mother, Clare, was the family historian and who lived in Adelaide. Judy told me that her mother was sitting next to her high school English teacher on the train that day, who removed her petticoat, tearing it into strips to be used as a tourniquet to staunch the blood of injured passengers who were seated all around them.

Three years ago, while poking around in the fascinating National Railway Museum in Port Adelaide, my heart skipped a beat when I stumbled across a black steam engine, meticulously preserved, which was used to haul the picnic train on that fateful day,  January 1st, 1915.