The Masters’ site: the real costs 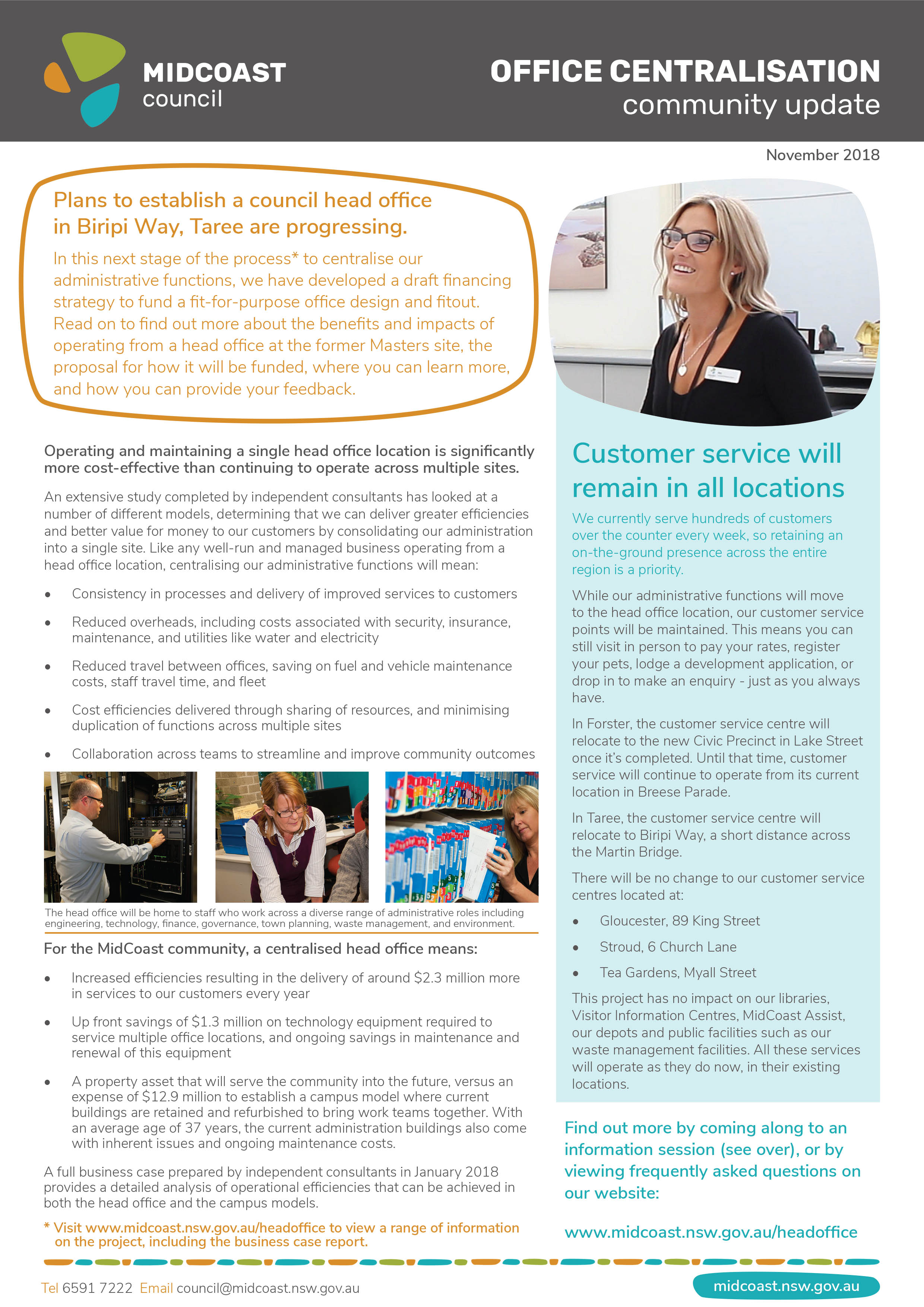 It seems after eight MCC Council community sessions on Masters’ site issues, ratepayers are no wiser.

I attended the final session which was to discuss financing strategy, other issues were addressed in the “gateway” process Council follows. The impression I got was that it is a “shut-gate” approach, a decision has already been made to centralise at Masters and ratepayers should accept it and move on. The reality is quite different.

It was also blatantly apparent the new General Manager will follow, without proper scrutiny, the direction already undertaken. It is so disappointing for concerned ratepayers, a lost opportunity to break from the tarnished past and give hope that MCC have realised their community consultation is nothing more than pandering to guidelines without really taking on-board feedback. Council’s motto to build “trust” appears hollow and insincere.

So, what are the costs MCC are so reluctant to divulge in their juggernaut journey to Masters? Based on financial documents issued by MCC and additional compilation and analysis I conclude the bottom line is $37.6 million. This will surprise many ratepayers who were “conditioned” by MCC to believe the cost is $7 million to purchase plus $20 million to fit-out.

The Masters’ site was purchased in November 2017 for $7 million. The cost was initially financed via internal reserves and subsequently replaced by an external loan. No financial report or analysis from MCC have declared the actual interest cost on the 20-year loan. A straightforward financial spreadsheet shows the net interest cost is $2.4 million. This is the today’s value of the interest part of all loan repayments over the term of the loan. MCC did declare the interest rate at 4.05% and assumed that rate is fixed for the term of the loan. Extremely unlikely. A more practical and sensible approach is to assume that the interest rate will change. In my analysis I incremented the interest rate by 1% after the first 10 years: still very conservative.

The fit-out of the Masters’ site excluding IT and audio-visual equipment according to MCC is $20 million including a 10% contingency for cost overrun. The $20 million is to be financed via a $7.2 million drawdown from cash reserves, the sale of existing rental property assets valued at $4.8 million and an $8 million external 20-year loan. The net cost of the interest part of the loan repayments is $3.1 million.

MCC have erroneously and conveniently overlooked the lost revenue on using (their own) term deposit cash reserves of $7.2 million, a net cost of $3.2 million. Further, using the proceeds from the sale of existing rental property assets valued at $4.8 million also has a cost tag: $2.1 million. MCC make the false assumption there are no costs where internal reserves and proceeds from the sale of Council properties are used in lieu of external loans. This is fallacious. Each must be costed and included as a cost to centralise at Masters.

Legal cost on purchase of Masters’ site to date are $6,207. MCC seem to run to consultants, even when the services provided are questionable as we saw earlier this year when Savills Project Management produced the seriously flawed Business Case report. So far, the services of Savills / Syneca, Montlaur, Slatterys, RSM and Knight & Frank have cost $210,000. Undoubtably this is not the end of resorting to consultants. He who pays the piper calls the tune and in my experience, consultants will deliver in written glossy terms what the master demands.

Expenditure on IT and Audio-visual is less for the Masters’ site option compared with retaining existing offices and upgrading existing facilities, a “saving” of $1.25 million. The Business Case report from the consultants, Savills, detailed staff inter-office cost savings from a move to Masters. Taking the annual figure, applying 4% CPI and computing the net cost gives a “saving” of $2.6 million. The cost of staff travel allowances is not material and is not included.

Using the services of Australia Post, MCC has dispatched 51,000 survey leaflets to get community feedback on Masters. One of the tick-box options is “Cost Efficiencies and savings”. Ironically, ratepayers have not been fully informed on the costs associated with Masters. Further, the key efficiency cited in the Business Case (report, March 2018, from Savills) was the cultural transformation program (CTP), scheduled to deliver significant financial returns after 10 years. That report was seriously discredited in a previous article in this paper. The Business Case failed to cite one public service entity that had financial benefit from a CTP. It seems this survey is redundant.

Back to survey costs: reply-paid return will cost $1.53 each. Expect this to cost $25,000 for distribution and returns, excluding internal processing costs.

MCC states that all interest and principle repayments on the $8 million loan will be serviced from rental received from the current Forster administration buildings. This seems to be a change of strategy presented in the Business Case earlier this year, however, this does not invalidate the $8 million interest costing itemised in this article. It is still valid. This new strategy exposes another heavy expense, the cost to fix or replace the roof on the administration building as apparently there is serious leakage. There is a budget allocation of $2 million to rectify the roof problem in 2020. There is no cost item in the MCC Masters’ costing for this. Most likely MCC will contend the roof problems need rectification irrespective of a move Masters. Granted, but now that rental is considered, where are the cost figures to renovate and partition the proposed rental buildings? MCC need to quantify these and make them available to Councillors and ratepayers. I haven’t included here an estimate of these significant costs.

MCC have allowed for a 10% overrun in costs in their $20 million Masters’ fit-out estimate. This contingency needs to extend to other variable costs. No allowance has been made for fluctuation in interest rates for the two loans ($7 million and $8 million) and the other expenditure items cited in this article. The contingency in increased by $1.3 million.

Councillors in the Dark

Simple addition of the underlined costs here yields the revealing figure of $37.6 million as a more realistic estimate for cost of moving to Masters.

MCC published on their website their 10-year Long Term Financial Plan (Council meeting 28th November 2018). Ironically, the LTFP does not contain a Masters’ scenario to show Councillors and ratepayers where Council is heading with expenditure on Masters. So how do Councillors make weighty financial decisions without the correct information in the appropriate reports?

At a Council meeting I attended late last year, Councillor Epov stated that he feared Council were stepping onto a slippery slope in making decisions to move to Masters’ without knowing the full cost of the undertaking. It appears that statement was said with foresight.

Now the slope is treacherous.