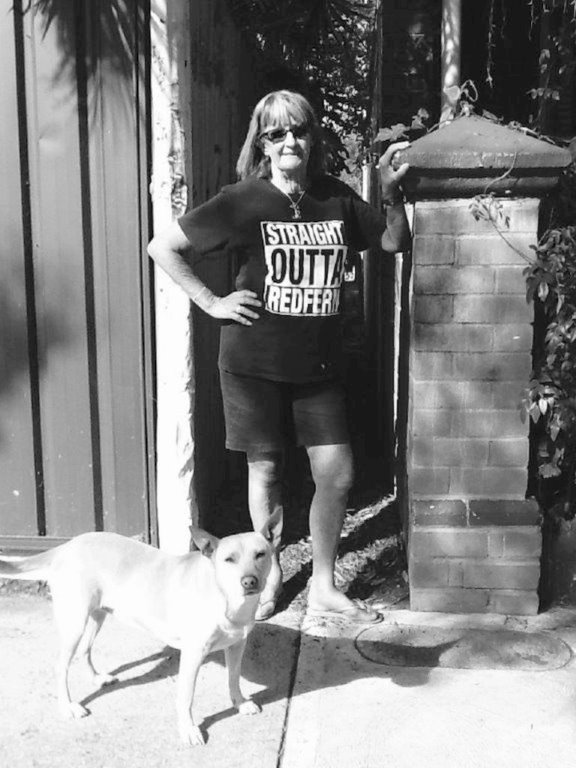 A suburb and its history through one woman’s eyes

Extract: Ronda is a Redfern identity, an icon, heart of gold and everyone’s friend. “It’s because I talk to everyone even the junkies and drunks,” she says. “They’re just people.”

The public housing towers were built in the 1960s, and nefarious types prowled the streets. Ronda’s house was broken into, the walls smeared with faeces, and everything of value taken. “You couldn’t go out at night because of the low life, and as well, some days the smell from the hops at Resch’s Brewery was disgusting. You had to close the windows.”  Still, 40 years later, Ronda proved a stayer, with two daughters and three grandchildren.

Ronda isn’t very tall but her personality is pure six-footer, and she’s not to be messed with. She can hurl every word in language at anyone who does the wrong thing.  A man turned up in her bedroom one day and she spoke to him with such #K*#@ vehemence he fled. I saw a cyclist copping it for not slowing at a crossing. He was told his arse was where his brain should be, and lots more.

Ronda is a Redfern identity, an icon, heart of gold and everyone’s friend. “It’s because I talk to everyone even the junkies and drunks, “she says. “They’re just people.”

Things have been changing, as Redfern property prices skyrocket, and as different sorts of people move in. You can go out at night in most streets now. Ronda remembers other times, old times and times not that long ago.

In 2014 Harriet Wran, (daughter of former late Premier Neville Wran) on ice, was with her junkie boyfriend when he murdered a drug dealer in one of the towers. After that, police patrols and general security were increased, but it’s still not a kindergarten today. There’s a reason the housing blocks are called Suicide Towers. Ronda has seen the bodies of several “jumpers” on the grass verge. Or had they been murdered? You just keep walking.

Redfern, like other nearby suburbs, was mainly industrial sites and factories in earlier days. The Portuguese, Greek, and Lebanese men worked at places like Wunderlich Tiles, where pressed metal ceilings were made, the Glass Factory, Resch’s, the Printery and more. The women stayed home doing piecework.

“You could hear the whirring of their machines, 24/7,” says Ronda. And through them Ronda learned to love “wog food” – beautiful Greek cakes, spaghetti bolognese, Lebanese dips.

The Resch’s Brewery on Bourke Street closed down 37 years ago, and as the buildings came down armies of rats, grown fat on the grain, fanned out in search of new lodgings. Ronda had them running through her house (and a huge dead one in the kitchen cupboard). Eventually the Council gave everyone rat traps.

There are stories of the characters that lived around Redfern: Champagne Charlie, a polite Asian man, who never asked for money but only for food. One day he was found dead in a gutter, apparently beaten by a gang of youths. Ronda remembers him always wearing a suit, and carrying his cheap champagne wherever he went. Others say he was drunk and dirty.

Then there were the Buddle Boys just a block or two over in Waterloo. They took over the Grosvenor Hotel with their Dad, and apparently created mayhem. Danks Street, another few blocks away, was dangerous. “You wouldn’t walk down Danks Street to save your life in those days!” says Ronda.

Then the arty and foody people arrived – Fratellis moved in with flash groceries, and a fine restaurant upstairs. Artists and galleries spawned. Soon Danks Street was extremely trendy and chic. Now, Fratelli’s has gone, and the art gallery complex is being demolished to make way for apartments. The Happy Clappers are still there, says Ronda – Hillsong is even busing in young people.

On the corner of Cleveland and Baptist Street is Murder Mall. No one knows how it changed from Methadone Mall to Murder Mall, but Ronda thinks that, “There probably was a murder; lots of strange people about.”

A Chinese developer was circling to buy it, but Murder Mall was sold to Wesfarmers (for development) for close to $100 million… the end of an era.

Across the road from the mall are the Mounted Police, the oldest such organisation in the world. And behind them, fronting Bourke Street, is the Evergreen Taoist Church, once the police barracks.

One place in Redfern says it all. Not far from Ronda is the Corrugated Iron house. It was apparently a shearing shed in 1920, and in 1970s an old man pottered around in his iron shed there. In 1999, came the terrible hail storm, dumping 500,000 tonnes of hail on the inner-city, destroying cars, trees, houses. The shed was wrecked, and the old man never returned. New owners came and went – and one built a marvellous house. The studio at the back, in a nod to history and to please locals, was clad with the recovered iron sheets from the old shed. The house then sold for $2.75 million. It is now famous: A backdrop for fashion photographers, and an architectural talking point.

Not far away is Redfern Park, where Paul Keating gave one of the greatest speeches in Australian history.