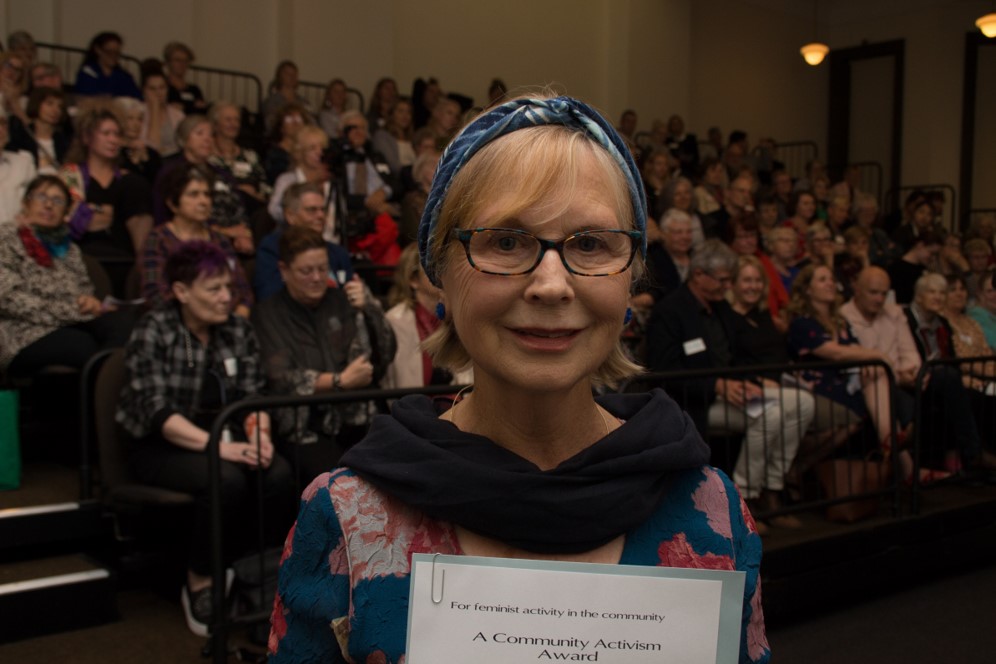 Leonie McGuire, who has worked so tirelessly for women affected by domestic violence, was last month awarded a prestigious Edna Ryan Award for 2018.

The EDNAs are awards for women who have made a feminist difference – the battlers and the unsung heroines who show commitment and determination. These Awards recognise those whose activity advances the status of women. Named for Edna Ryan who devoted her life to the cause of social justice for Australian working women, to commemorate Edna’s remarkable achievements as a feminist, trade unionist, political activist and labour historian.

Bill Shorten has pledged that the Labor Party will make significant policy commitments, if his party is elected to government at the next election.

*Labor will continue a program to keep women and children subjected to violence by their partners in their homes. He referred to an amount of $18 million.

He asked: Why should the perpetrator enjoy the safety of the family home when it is his behavior which causes women and children to flee in fear of their safety, even, as we know, all too often their lives?

*Labor will fund font line services, so they can do their job properly. Front line workers shouldn`t have to worry about whether they will get paid or not.

*Labor will establish a National Plan supported by an advisory group made up of individuals who have expertise, qualifications and experience in the field of domestic violence and who know what is needed to keep women and children safe.

An area of concern for me is the current fashion for focusing on men – the need to change their attitudes and behaviors – while that is commendable and there must be an objective to change the culture, women and children die in terrifying numbers across Australia while we wait for men to renounce this horrible gender-based crime.

Our own Parliament saw the resignation of Julia Banks from the Liberal Party as she can no longer tolerate the sexist and bullying behavior of her own colleagues.

Sarah Hanson-Young was almost immediately the target of a sexist slur in Parliament -if our political representatives and leaders behave in this way how can women ever expect to flourish even survive?

I am concerned that the perpetrator programs which see money diverted from women and children in danger are just papering over the cracks – yes it is important to understand why so many men feel they have an entitlement and the right to treat women as brutally as they wish but the focus must be on the right of women and children to live free of violence and that means resources-not charity models of service where women receive some often well-intentioned but meaningless  handout.

I don`t see in all the language about educating men any thing at all about educating women to recognise the signs of abuse and how to keep themselves from even entering relationships with such men who often are very charming initially. I see nothing in the language about women needing a return of the feminist, specialist, domestic violence refuges which offered immediate safety, day or night 24 x7.

It is futile to lobby the local LNP Member Stephen Bromhead on issues relating to domestic violence and the need for specialist quality properly funded front line services. From the outset Mr Bromhead supported the dismantling of the excellent Taree women and children`s refuge called Lyn’s Place and saw its handover to a religious organisation which runs it as a budget service-  providing reduced access and barely any services. (This is from women who speak to me -the Samaritans refused to meet with me and other women who have worked for the refuge and offer our skills and assistance. The local services are seriously failing women- I hear anecdotes every time I am in Taree. I keep them anonymous- it’s partly why I designed the Rate a Service feature on my web page.)

If you require help or information see –

I wonder what Edna Ryan would make of feminism in 2018. It seems to me feminism is fragile. There is a strong male backlash against women, powerful voices speak out against us-some are even calling the current situation a war on women,

Men in 2018 have murdered 70 women and murdered 18 children-60 of those murders were domestic violence.

Can you imagine the reaction if 2018 had seen 70 shark attacks,70 murdered police, 70 murdered tourists? 70 murdered women -nothing.

The PM has been running around recently in his Scomo bus carrying on about strawberries. Recently there have been 2 shark attacks-the QId Govt has called for a summit.

This silence on violence to women and children from community leaders and politicians normalises it-the worst aspect of this is that once normalised it knows no limits.

In my opinion sheep and cattle are better safeguarded in Australia in 2018 than women and children.

In 2014 the Baird LNP Government ripped the guts out of feminist, specialist, domestic violence refuges.

They replaced them with a patchwork of homeless hostels which were handed over in the main to large faith-based organisations-what a clever coup against feminism that was.

It shouldn’t be a fight or struggle to keep women and children safe.

It should be obvious that you can’t merge domestic violence and homelessness-what Dr Susan Heward-Belle of Sydney University calls in her paper “the genericising of women survivors of domestic violence. “The result has been as Susan observes:

That domestic violence survivors have become primarily reduced to considerations about residential and tenancy status.

My first lesson about the link between perpetrators and issues of power and control I learned a very long time ago:

It is 1976, I am working at Bringa,Manly Wahroonga Womens Refuge and Resource centre. During the night the police brought in a woman they had found in the street-she was in her nightie, covered in milk and shards of glass. Her husband had smashed a milk bottle over her head and locked her out of the house

The next day I was talking to her about the incident-she told me that her husband was a maths High School teacher at a High School on the Northern Beaches. I was shocked -1 too was a High School teacher and I asked her, knowing how provocative high school students can be if he had ever attacked a student? She replied emphatically that he had never attacked a student and never would-he would lose his job, his income and his career prospects and he knew never to do that.

At Taree Women’s Refuge known as Lyns Place where I worked as manager for 12 years until 2004, we supported the wives of business and professional men-I know for a fact that those men were not abusing their customers, their patients or their clients.

This is not very politically correct of me in 2018 but my observations were that I only ever saw men making choices around abuse. I believe that still to be the case.

The eradication of slavery came about because of legislation, enforcement and perhaps some education.

Men will continue to abuse women and children for as long as society permits them to.

Governments are failing in their duty of care. I foresee yet another apology to the families of murdered women and children who Governments have recently neglected and turned away from.

Restore and support all feminist refuges so they can do their job! Support women and children to remain in their homes-just do it!

I have left some fliers on the front desk-they are to promote a new website put together by Leonie McGuire, Lisa Lewis, the support of Christine Bird, Spider Redgold and artist Julie Hamann.