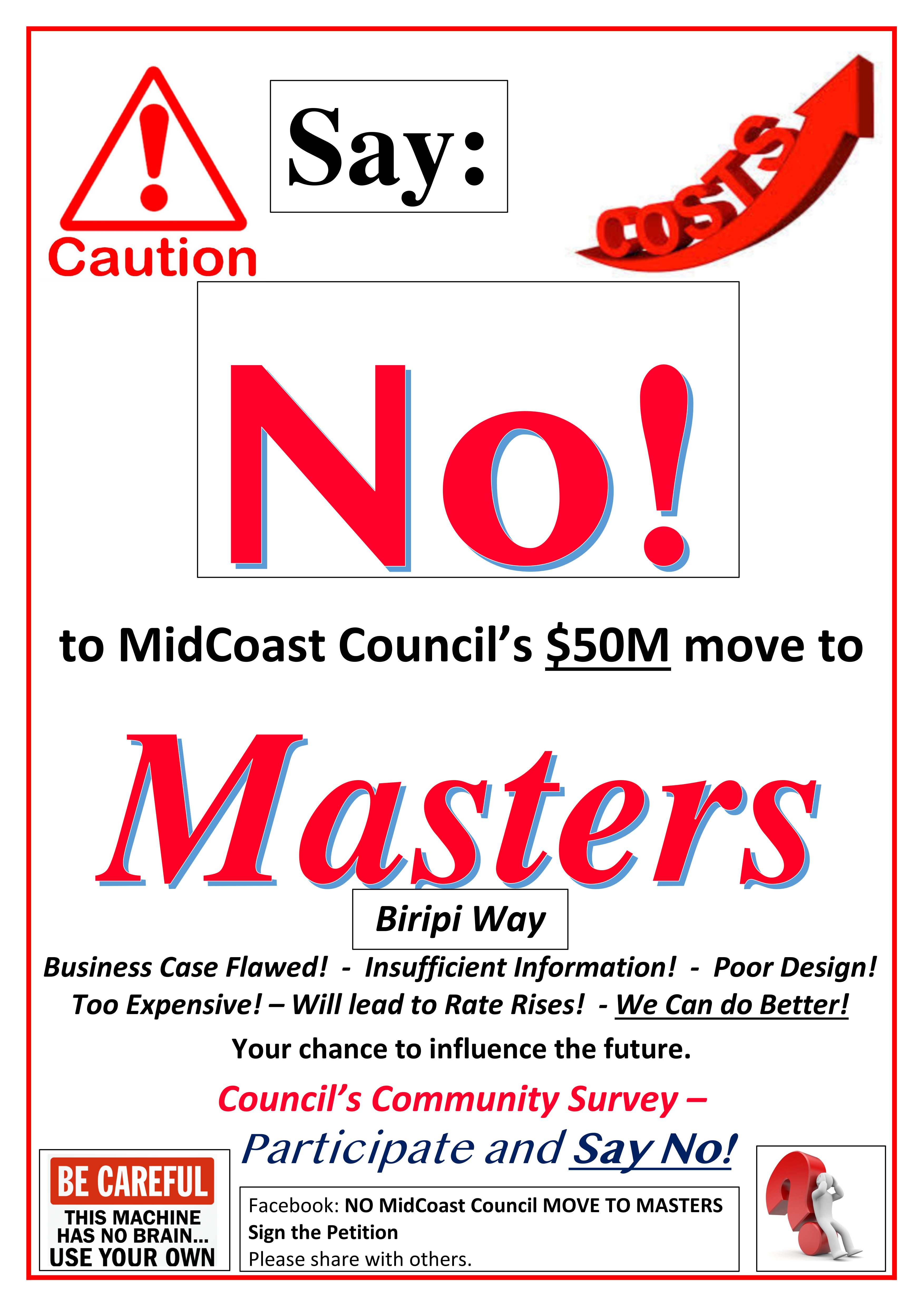 As the word is spreading that the proposed budget for the ex-GM’s mad Masters dream could match the Glasshouse fiasco
(at least $40 million) troops are stirring at the idea.

A disastrous council attempt at community consultation has turned into a fiasco.

Those who did attend a series of public council “consultation” meetings came away outraged at the Council staffs’ arrogance, officiousness, lack of detail and non transparent answers. Including from the General Manager.

Residents at the meetings  declared they were disgusted, making reference to feeling like the proverbial mushrooms –“fed muck and kept in the dark.”

Taking a frontline position in this war, Council’s tactics are scarcely camouflaged. The constant complaints against this secretive  Council, who seem to regard us, the mob who pay the bills, as the enemy, resulted in a rushed much touted community consultative campaign.

So they mailed out colourful if confusing leaflets announcing a series of community meetings to hear what we all think of the Masters/Biripi plan. Direct mail campaigns can be effective. But Council’s leaflets were misleading. They were not sent as direct mail so looked like junk mail thus many were tossed away. The survey form gave little space for answers and is and unclear if you had a negative opinion about the Masters move, you had to write a separate piece to say so.

There was no explanation on how to return the forms, that people had to use their own envelope, which then had to be addressed in a certain way in order to post it back reply paid. Or else buy your own stamp.  The direct mail industry works on a response rate of 3%to 5%. The average is around 3.7%.
If this is the case, when council dumped 51,000 newsletters the minimum response rate should be about 1880 letters back. They had only received 16 as at 28 November.
Claims from Australia Post at the Taree Mail Centre that the newsletters arrived late and were only scheduled for distribution from 26 November meant that most people receiving mail would only get their newsletter after all the community events had been conducted. Council claims it’s all Australia Post’s fault.

So it was no surprise many of the meetings had mere handfuls of attendees. Cr. Epov commented the whole fiasco of the mail out seeking public feedback was deliberately designed to fail.

Concerned member of the community from the Forster meeting, Katrina Pearson, asked whether it would make sense to postpone a decision on Masters till after the March election allowing further transparent consultation and flagging de-merger possibilities if a Labor government got in.

Says Karina Pearson, “Whereupon Mayor West leapt to his feet, and began a tirade that this (a council de-merger) would never happen! But his tirade seemed rehearsed, as he’d given the same “performance” at the previous meeting in Taree which I also attended. Anyway, there were 26 people present at the Forster q&a and 26 were against the whole thing.”

Others also commented on the Mayor’s aggressive and defensive attitude.

People were furious at the hubris from Council staff saying to people ‘just go to our website” when they had been repeatedly told that many in the community don’t have a computer and are not on the internet.

“The anger in the room at the refusal of the council staff to even listen was shocking. I raised three queries about what certain reserves were and the information forwarded to the consultant for peer review, and I was told at that meeting answers with details would be forwarded to me by email.  To date I haven’t received any reply. The GM wasn’t there at this meeting, this was the word of Steve Embry and he’s failed to honour his commitment. So I’m going to advise the Office of Local Government.  There is such a lot of confusion over the numbers Council are trotting out, we need more information, or, at least Council should take on board what we as a community can see are possible dangers into the future for our community. The staff however, do not want to listen. Councils in the past have gone down this path and been severely punished as a result. When the staff have the idea that they can do what they want and not worry about us, the plebs, I say we should be wary.  Dodgy figures that go out into the public arena will be jumped on now as there are people with financial expertise watching Council carefully.”

This is a recurring theme from members of the community. Adds Hogan, “The staff at Council aren’t keen to let a truly independent auditor verify their procedures and financial statements, so why not let us get someone external in to check it all out? Why don’t they want the books looked at?” he asks rhetorically.  “Also, if this Masters’ exercise is just a fit out, as they tell us, why can’t the community see what they’re planning? Why is it all confidential? What are they hiding? Surely this is not a way to involve the community. Having secret meetings amongst themselves  and then leading the councillors which the GM and Embry seem to be doing.”

This “leading” has been noticeable, whereas before comments to the public were referred to by council spokespeople as –‘The Council is doing such and such, or thinks this, Council plans to . . .’ Has been altered in public utterances or stated or actioned as being from, or by, the counciLLORs. Not Council.

Adding to Council’s overtly secretive behaviour Cr. Kathryn Bell notes, “I am disappointed with the minimalist coverage from the local media such as the MRT, Chronicle and consortium, as this is the biggest single spend this council will make. The matter has polarised opinion and there needs to be more information for discussion in the public arena.”

Amidst the growing community concern, a group of citizens with legal, finance and business expertise, have combined to ask hard questions and comb through what information has been gleaned from Council.

Council staff, and some councillors, refer to these concerned citizens as “the naysayers.”

Meanwhile Councillor Epov has been reading through hundreds of pages of evidence from the massive case brought against Port Macquarie Council in 2002, trying to learn lessons to avoid MidCoast Council falling into similar pitfalls. The end result of the Glasshouse furore saw the Council dismissed, the GM dismissed and an Administrator installed.

The Commissioner overseeing the fiasco, Frank Willan, stated, “Overall the costs of the project grew from somewhere in the vicinity of about $6 or 7 million in April, 2002 to $41.7 million, 6 or 7 times the initial budget.”

Audiences who may enjoy events at the Glasshouse these days, still wince at its painful cost.

So, was a move to “centralise” council offices ever mooted as a plan in the first place? No one knew about the idea until Masters went on the market, and, if you recall, a huge bunfight ensued after the Macksville trucking company people made an offer, had it accepted and were moving ahead, only to find that then GM Handford had gazumped them. Before the community knew buying it was even an idea!

In the ensuing turmoil, the GM resigned December 20 a year ago in a shock move that stunned staff, other than his inner circle, of whom the key remaining figure is Steve Embry. Mysteriously some key staff slipped out the back door, leaving confidentiality documents in their wake, never to be seen again. However several have cropped up apparently working with Handford in his company associated with notorious Tea Gardens developer, Philip Dong Fang Lee.

There is spreading anger in the community, that is from those who are waking up to the enormity of this Masters/Biripi Way shambles. There’s fury that we’ve all been played as patsys and will end up paying heavily for this debacle. Council are putting a positive spin on it, but it will be too late by the time we see what we’re really in for unless we stop it now. Council are treating it as a done deal. It’s not.

A group of local smart thinkers and do-ers have come together in a loose coalition to investigate Council’s figures, justifications, secrecy and why Masters was ever bought in the first place. To many it seemed a whim on the part of the former GM who apparently saw himself as a bigtime developer at heart.

He’s cut and run, and we’re left holding the bag.

See on page 3 a very conservative estimate of the total Masters cost from one of the No Masters Coalition.

Send your feedback to Council or else they’ll say everyone is in favour. Silence on this issue is taken as a Yes.  Call Council on (02)  65925301 and state your objection. Make a note of whom you spoke to and date and time.

NO MidCoast Council MOVE TO MASTERS!