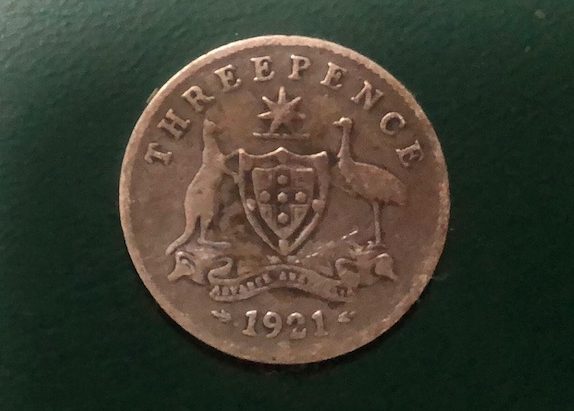 Know the past and embrace your future. Collecting can not only be beneficial as a great hobby but, can also give us knowledge about our history and about the life and times of our ancestors.

Joy to the world and goodwill to all. Our world seems to be moving further away from this simple saying.

Taree Collectors Club are working on their Antiques and Collectables Fair on the 4th & 5th May, 2019 with lots of displays and selling tables available. If you have an interesting collection you would like to share – display tables are available (no cost). Selling tables are also available for quality antiques and collectables (cost involved). If you are interested contact Rex (co-ordinator) on 0427 880 546.

As a child, a great memory of Christmas at my grandparents dairy farm on Rosewood, across the river from Beechwood, at Wauchope, was Christmas dessert. Plum pudding and custard with threepences (3d) and sixpences (6d) baked into the pudding. The finder would be a little richer and a little luckier. My dad would always find a two shillings (2/-), via his pocket, and a laugh was had by all.

Christmas pudding (also called plum pudding) is traditionally the main dessert served with Christmas dinner in Australia, Ireland, New Zealand, South Africa and other countries, but its origins are very much British Empire.

Traditional Christmas pudding is very dark in colour and it’s often soaked with brandy or other alcohol, which is sometimes set alight when serving for extra drama. It is often served with a sprig of holly on top and is eaten with brandy butter, rum butter, cream or custard.

It’s been common practice to include silver Christmas pudding coins, charms or tokens into the Christmas pudding. Finding a Christmas coin in your slice of pudding is believed to bring good luck and especially wealth in the coming year.

This tradition may date back as early as the 1300’s when a dried pea or sometimes a small silver ring or crown was baked into a Twelfth Night Cake. The finder of the token was said to be king or queen for the night.

Originally a single silver coin or token was added to Christmas pudding so just one of the guests at Christmas dinner would be granted good luck, but eventually several coins were included to spread the luck around. In 1946 the silver content was changed in the threepence and sixpences so after that date coins were not recommended because the pudding could be tainted.

With coins in mind, the original inhabitants of Australia bartered food, tools, ochres, shells and other accessible items. The first white inhabitants also traded goods, including rum, and used a variety of countries coinage such as English sovereigns, pounds and pence, also Spanish reales, Indian rupees and Dutch guilders.

It wasn’t until 1910 that Australia produced its own currency – pounds, shillings and pence. This currency continued until 14th February, 1966 when decimal currency (dollars and cents) was introduced.

There are some very valuable Australian coins. The Holy Dollar and Dump made from a Spanish dollar with another smaller coin punched out from its centre, hence the Holy Dollar and the centre coin – (the Dump) is very sought after. The 1930 penny is worth thousands – how many thousand depends on its condition. Condition is most important when collecting coins and notes.

When grading coins they range from Poor (can’t read what it is), Good (lots of surface wear), Fine (still has user wear but detail more pronounced) and uncirculated (hasn’t ever been in general circulation). There are lots of sub grades between the above.

We have lots of avid coin and note collectors in our area.

Happy hunting for the month!

Have the very best Christmas you can. I hope you find a coin in the pudding!

I recommend collecting to all. Find a category that suits your interests and take the plunge and collect a variety of unique and interesting treasures or limit yourself to just one area. It is always fun.

If you have items you are not sure of, I may be able to help with information, appraisals and/or sales. I love the history and stories of old and interesting items. Phone Rex – 0427 880 546.