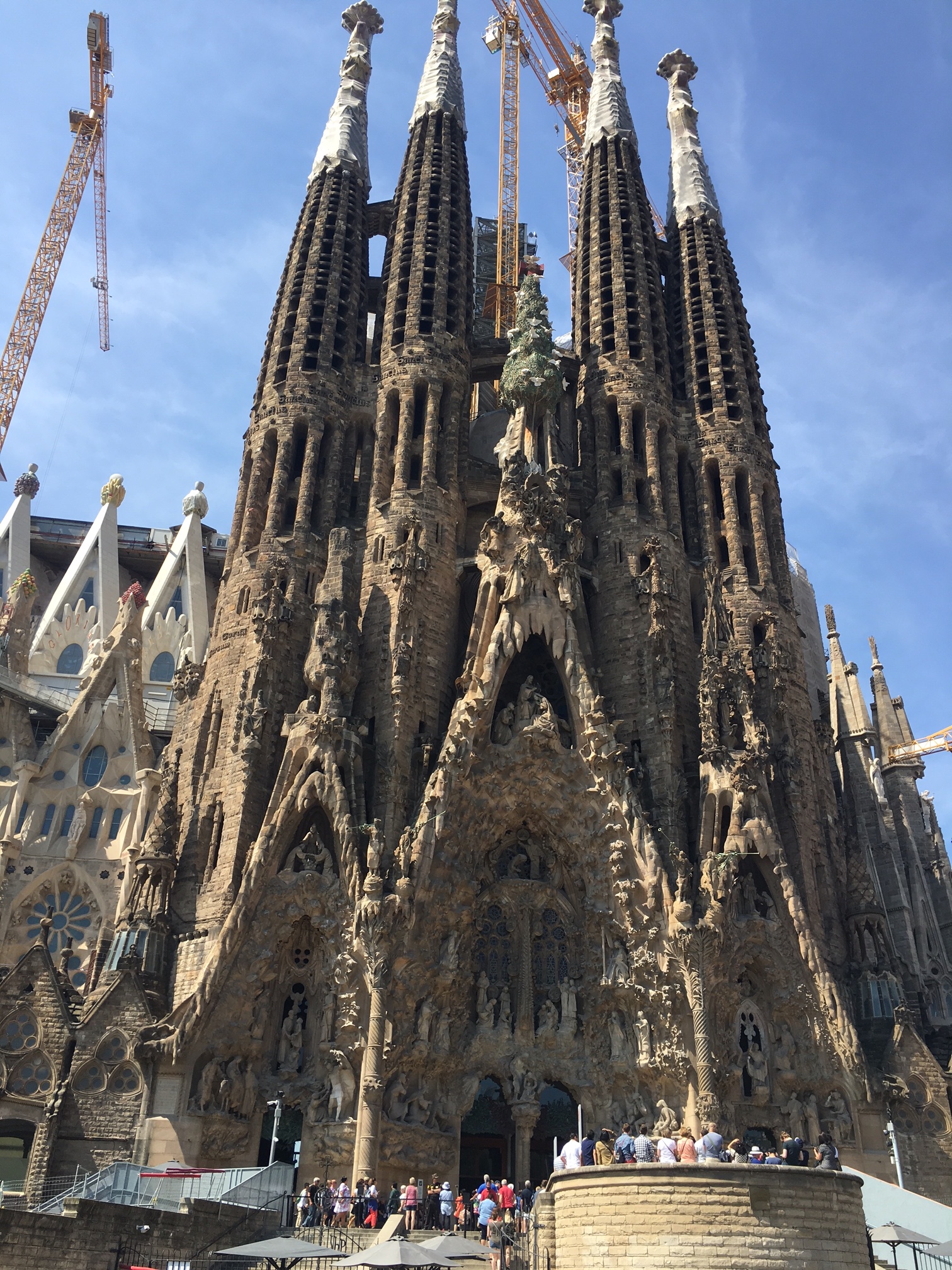 Nothing prepared me for the moment.

I stepped into the sunlight at the top of the steps of the Barcelona Metro and looked up, even as others surged past.  Disappearing into the sun’s blaze were the ornate spires of the basilica called La Sagrada Familia, Barcelona’s jewel, architecture’s altar piece and, since 2005, a UNESCO world heritage site.

And, seemingly, the spires went up forever, past the cranes, into the heavens.

Today, one hundred and thirty-five years after construction commenced, La Sagrada Familia, the Sacred Family, is still unfinished.  Not that the thousands queuing for entry cared much, but their precious Euros continue to fund the construction work.  From serious pilgrims to art poseurs, crowds come in reverence and in recreation, making this the second most visited site in Spain, after the Alhambra in the city of Grenada.

This basilica was the vision of Spanish architect Antoni Gaudi, but he was not the first commissioned: that: was Francesc del Villar but he died in 1883, a year after getting the job. And since many of Gaudi’s plans and drawings were destroyed by anticlerical rioters during the Spanish civil war in the mid to late 1930s, controversy continues about the purity of the Gaudi vision as now being realised in the present work. It is scheduled for completion sometime before 2040. 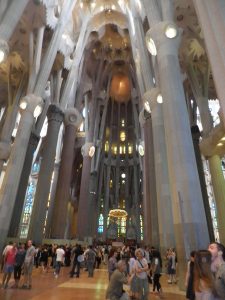 Scale is part of the impact of La Sagrada Familia.  The tallest of the spires, symbolising Christ, reaches over 170 metres above the 95 metre footprint of the church. This, and a further 17 towers exceeding 100 metres, give the church the overwhelming sense of verticality.  I stood in awe.  But it is the ornate surface decorations, inspired by nature’s forms –Gaudi’s signature–that defy any simple description.

Once inside, however, the ornate of the exterior surrenders to simplicity of form and a purity of line that directs all attention at the central altar, the site of Catholic celebration.  And below the main altar, in the crypt, Gaudi is buried.

Gaudi had been a successful, though idiosyncratic, Barcelona architect. His apartment buildings, in his particular style, grace the inner city.  They each display elaborate designs and continue to attract crowds of admirers today.

But La Sagrada Familia progressively became Gaudi’s life’s work, his obsession, once he took over in 1883. He never married, though he provided a home for his aged father and a cousin, so La Sagrada Familia became his family.  He was also a Catalan nationalist and deeply devout Catholic, and attended mass before and after work, walking from his home at Park Güell, now a museum, in the hills behind the old city. Strange to say, and perhaps mysteriously, Park Güell lies on the centre line of the cathedral, extended to the west.

There have been times when the completion of Gaudi’s cathedral has been threatened.  The destruction of much of the site, as well as the plans and drawings, in the civil war of the 1930s, was one occasion, and there have been other calls to abandon Gaudi’s sagrada folly.

Today, a building conceived as a personal and public statement of devotion has become a universally recognised as a work of architecture, art and spirituality across religions and nations.  It has things to say to us about vision, design, innovation and obsession as well as religious devotion and persistance.

Value in the future

Is there a mayor or bishop today who wants the legacy of destroying by indifferent omission or by venal ambition a future icon?

(And in a post script, Mayor of Barcelona, Ada Colau, announced in October 2018 that a building licence has been issued to the Sagrada Familia, the first such official permission since construction commenced in 1882.  And some say our local Council is slow!)