THE YEAR OF THE FARMER 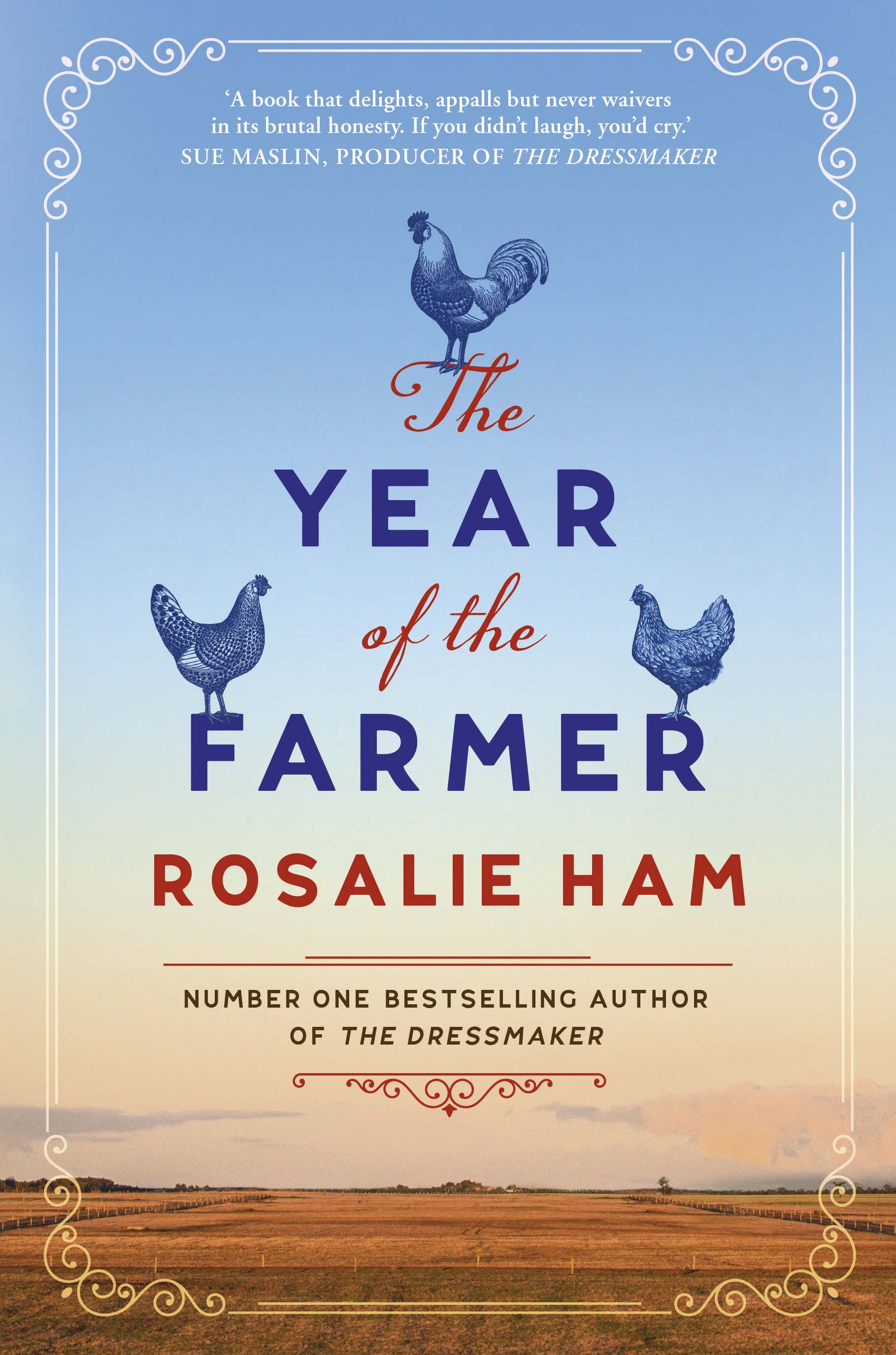 Glancing at this book’s cover, resplendent with chooks and scrolls, could lead you to think it will be a happy tale of rural life, but a closer look at the shot of dusty orange paddocks tells the real story of The Year of the Farmer.  Rosalie Ham has tightly woven a dark novel about a small country town, drought, and fitting in or always being kept out.

Through the eyes of the handsome and lovable Mitch Bishop, the story begins and we watch as the drought gets worse and his pile of bills grows taller. An optimist, Mitch tells his dog, Tinka, ‘“Those clouds will slide over here and water will fall from the sky”… “I see you don’t believe me, Tinka, but I’m reliably informed that weather works in seven-year cycles and I choose to believe it.” He climbed across and stood on the roof of his ute. ‘This is my year, our year. Rain will fall and life will change.”’

Water is scarce, in demand and tightly controlled. ‘At this point, water is blood,’ townies Kevin and his beloved Jasey decide. The pressure is on for Mitch along with his neighbour, the kind and eccentric Esther Shugg, and other farmers in the district to cooperate with the State Water Authority’s buyback scheme. Perhaps their new irrigation plans are not a bad idea. An onlooker at the Water Authority’s community meeting might think they have merit, but Rosalie Ham reminds us that without listening to people and showing them some respect, you really can’t move forward. Cynically, the head of the State Water Authority, Ms Glenys Dingle, comes to the meeting accessorised in her stockman’s kangaroo-skin belt and new Akubra. Believing, it seems, that if she looks the part she doesn’t need to do anything else, especially not take notice of the farmers, whose families have worked the land for generations. The sharp humour in Ham’s writing accentuates how real this attitude is…at the end of the meeting, ‘Before the stage door had clicked behind her, Glenys was in her big black Ford Territory speeding towards her new Riverglen apartment. Beside her, back in its box, the Akubra waited for the next meeting with rural types.’

This is Rosalie Ham’s forth novel. Her bestselling debut work, The Dressmaker, published in 2000, was made into an award-winning film starring Kate Winslet and Judy Davis. In its opening scene, ‘Tilly decided she would go back to Dungatar’ and the leading character, Myrtle (Tilly) Dunnage, returns to the country town that kept her and her mother at arm’s length. The Year of the Farmer also circles around and dives into the life of a woman who will never fit in. Unlike Tilly, though, ‘Bicycle Mandy’ can’t redeem herself at all in the eyes of the locals or the family she married in to.

Again, this picks up the theme of truly listening and showing respect. Dropping subtle clues, Ham hints that Mandy has grown up on the outer and been looked down on; class mates, the townspeople and even her own family have always turned their backs on her or ridiculed her. The young girl who had nits in her hair grew up to marry Mitch, the most eligible bachelor, when his girlfriend left him for the excitement of Sydney, and Mandy was never forgiven. ‘She’d have loved to post photos on social media, everyone in paper hats over a feast, champagne and smiles. All she ever got to do was ride out to the cemetery and stand by the heap of gravel that was her grandmother’s grave and shout, “Guess who I married?”’

For Mandy, a lifetime of not being good enough, of being the wrong girl for everyone’s favourite guy, leads her to take revenge, and it’s wide ranging and thorough. She is impossible to like, but gradually you come to see what has gone so terribly wrong for her and why she is not the only one to blame.

Ham writes about important themes – the impact of the drought, for instance, goes beyond the novel into the lives of farmers around Australia. She also plays with scenes and ideas that will make you smile. Such as Jasey and Lana and their mild addition to scratchies: ‘They let their coins drop, one by one, and looked sullenly at the small mound of discarded tickets in front of them.

And when Neralie comes back to town to as new co-owner of the pub, the Bong, she sparkles on the page. You simply have to love her and hope she and Mitch will somehow get together.

Riverglen is fairly monocultural. No resettled refugees or Indigenous people. The diversity comes to the place as townies and farmers, ferals and riparians join forces to fight the Water Authority; then like an unending dance, they all go back to their own corners to protect the interests of their groups. Callum Bishop, Mitch’s father and one of the wise and endearing elders in this story, watches a TV program about water distribution systems in North Africa, then says to his son ‘A community around water. Cohesion in society. Marvellous.’

The farmer will eventually have his year and the town will keep going, with good times and bad. And the many characters that Rosalie Ham has created will stay in your mind. They are realistic, flawed and trying to make better lives for themselves. As Lana, who drives the almost vintage blue 1990 Holden Commodore, says: ‘I want the farmers to hang at the pub, joking and laughing, and I want lots of mums at school fetes, and I want fundraising film nights and cocktail parties again, and kids screaming on the footy oval and in cricket teams and at the swimming hole, and I want the town to show up for gymkhanas and sheep shows and race meetings, and I want Christmas parties that go for three days.’