“Rusted Off: Why Country Australia is Fed Up” 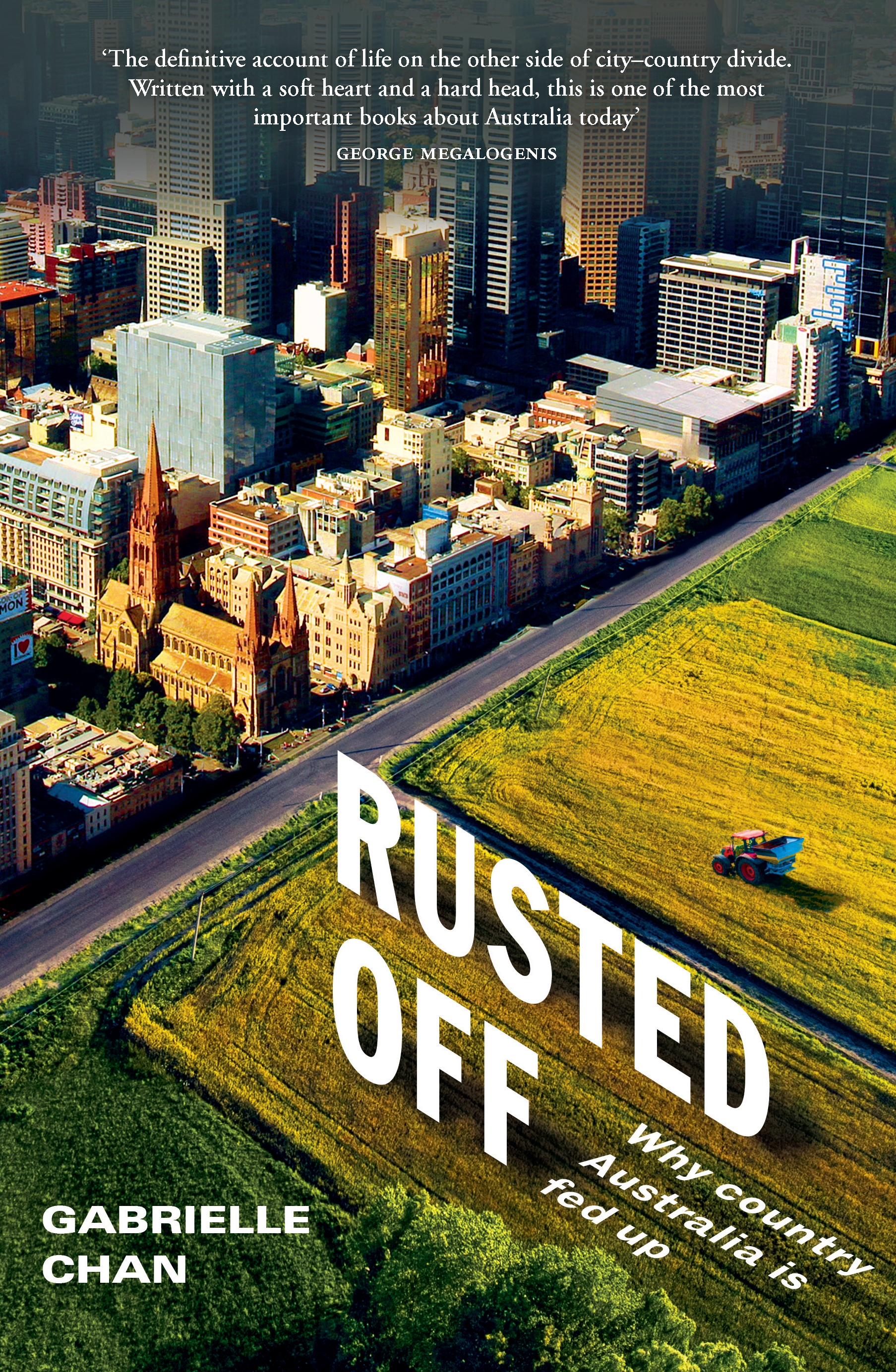 “The former Nationals senator Ron Boswell was quite the character around the Parliament. Shuffling around the house with his shirt tails out, he was an important figure in the National Party room for the longest time. He was the party leader in the Senate and took on Pauline Hanson’s One Nation party in its first incarnation. In his later years, he became the elder statesman and something of a Jiminy Cricket in the National Party room.

Boswell’s valedictory speech came one month after Tony Abbott and Joe Hockey’s budget in 2014. It was the Coalition’s first budget, the horror show of cuts that marked the start of Abbott’s decline as prime minister.

‘Recently,’ said Boswell, ‘I had to remind my Liberal colleagues in the joint party room of the statement of their founder, Sir Robert Menzies, in 1970. He said: “Australian Liberals are not the exponents of an open go, for if we are all to have an open go, each for himself, and the devil take the hindmost, anarchy will result and both security and progress disappear.” Just keep remembering it. These are prophetic words. The Liberal Party founder was saying that deregulation is not the answer to all problems and the free market will not always produce the best outcomes.’

It was a timely reminder of the contradiction at the heart of the Coalition. In that 2014 budget, the Liberal Party had clearly set out its agenda for a small government. The Nationals were less clear about their goals. Their then leader Warren Truss and his agriculture minister Barnaby Joyce talked about trade and dams and roads, but it was difficult to divine how the National Party fitted with the Liberal Party’s small government mantra. The federal Nationals big strength to a rural audience is that with a very small percentage of the vote it can keep the country front of mind by leveraging its larger Coalition partner when it chooses to do so. This has kept rural voters largely rusted on to the party for nearly a century.

The Nationals have chosen to use that power on defined issues: dams, roads, agricultural policy and regional development policy.

But their big failing has been their cultivation of close connections to established landholders and the business class in rural Australia while leaving behind the issues of the rural working class and underclass. In the 2014 budget, the National Party and rural Liberals signed off on punitive welfare measures, which would have forced people to move from their home towns to get work, Medicare co-payments and reassessments for those under thirty five on the disability support pension.

Note to MPs. You don’t have to look very far in rural and regional areas to find people who are marginalised. The country has its fair share of pension-card holders, unemployed people and the working poor, including a number of Indigenous communities with complex issues to address. These constituents are mentioned far less by the National Party, even though it has long been acknowledged that rural Australia experiences higher levels of poverty than metropolitan areas. The National Rural Health Alliance calculated on 2015–16 gures that there was an 18 per cent gap between disposable household income in the capital cities and rural and regional areas. The gap stretched to 29 per cent when calculating net household worth.7

But the central question I keep coming back to is whether a party that markets itself as the party of the bush should be doing more to appeal to the whole of country Australia, rather than speaking more exclusively to farmers and larger businesses. There are two constituencies that the National Party rarely mentions. One is the rural working class, which has helped build those farm businesses and industries. They feel largely neglected by National (and rural Liberal) MPs as well as Labor. The other is the #countrylife dreamers and tree changers, who are transforming country towns and villages. They are more politically progressive in their views than their long-time neighbours. These two constituencies are less rusted on to National and rural Liberal MPs who traditionally dominate rural electorates. They are open to other voting options.

Some of the most interesting insights into the place of the National Party have come from Liberal prime ministers who have worked with the junior Coalition partner. In Heather Ewart’s documentary A Country Road: The Nationals, the late Liberal prime minister Malcolm Fraser reflected on the period of economic deregulation of the 1980s, in combination with the effects of the drought. The Nationals failed to differentiate during that period and it weakened the party. ‘They didn’t realise the inherent strength they could have had.’

In the 1990s, during the Howard leadership, amalgamation was discussed and supported by former Nationals leader John Anderson. Though it was opposed by Ron Boswell, Anderson was sent to sound out John Howard. (Liberal–National amalgamation has always had some support within the Liberal Party and the Queensland division is a merged party.) Howard ruled it out immediately. He believed that the Nationals needed to hold the country vote parking spot so other independents or minor parties did not fill the void.

‘My great fear was if you forced it at a parliamentary level, it would not be accepted at the grassroots and then you would get people running as “authentic real Nationals” or they would even revive the old name of the Country Party and run against Coalition members and we would just be recreating the very disunity we were trying to get rid of,’ said Howard.

So is rural representation about holding a parking spot for the Liberal Party or should it have a different philosophy? I recently asked a state National aspirant running in a country seat why she’d chosen the National Party now, given the candidate had previous involvement in the Liberal party? ‘Because it’s a country seat,’ I was told. She obviously saw the parties as interchangeable, philosophically and politically, and she is not alone.

The predictability of rural seats in times past has meant that politically ambitious country candidates stand for the party that can win in those seats, not the one that best represents their values, if there are separate values. However, if voters are rusting off from the major party choices, it might be time to reimagine the old rural political model to represent newer models of country political representation.

That does not necessarily mean slaying the National Party. I am one who absolutely believes there is a place for political parties that represent country voters. But it certainly means country voters demanding more of our main country party as well as encouraging greater competition from political start-ups. It means thinking hard about the philosophical foundations of country culture as it exists now as opposed to as it was a century ago. Ultimately, it means assessing candidates on their merits rather than supporting our MPs out of tradition.”

This is an edited extract from

“Rusted Off: Why Country Australia is Fed Up,”