Local koalas get a boost 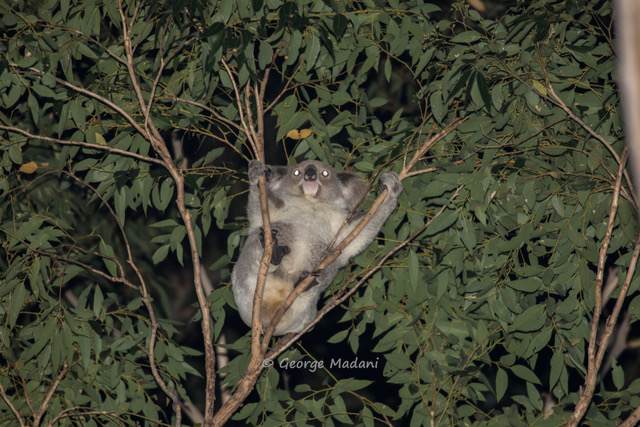 Myall Coast koalas are the focus of an ambitious new project to discover how best to look after them into the future. The Myall Koala and Environment Group has funded an exciting pilot survey with some fantastic results. Nine koalas were found during a survey of eighty-seven sites between Smiths Lake and the Karuah River.

“There was really strong support from the community with fifteen landholders allowing access to their land to look for koalas” said Jill Madden, Myall Koala and Environment Group

“We had all sorts of people involved, from landholders with small one acre lots, to parcels of four-hundred acres. Some people even joined in to follow the progress of the survey on the new Facebook Page” said Jill.

With a tiny budget from their annual stalls, raffles and donations the community group paid a koala expert to survey the region and rallied the volunteer support of two professional ecologists and six volunteer field assistants. The team worked until the early hours of the morning searching two-hectare ‘sites’ for koalas. The survey teams also found other interesting fauna including feathertail gliders, short-eared possums and greater gliders.

“It was great to see such a diversity of animals despite the drought” said ecologist, Dr Martin Schulz.

All koalas were healthy, with numbers comparable to other parts of NSW where similar surveys have been undertaken. There were even two koalas spotted in a lover’s tryst in a gum tree on the Old Mining Road.

“This is great news for koalas in this area because we know not only are they moving through, but they are living here and breeding,” said George Madani, the koala expert on the survey.

“We would like to sincerely thank all the volunteers and landholders who gave up their time to show the surveyors around their properties.”

“We hope that this is just the beginning. We have further areas we wish to look for koalas,” said Jill.

Mat Bell, Ecologist with MidCoast Council said “Council provided logistic support to the survey and is highly appreciative of the efforts of all involved. The koala is an iconic species. In order to conserve and manage healthy wild koala populations into the future we need detailed information on their distribution, population and threats. That the community itself has initiated this study is incredibly positive. Council looks forward to supporting and extending these koala surveys into the future.”

“We would also love reports of all your koala sightings, especially those outside of the well-known hub at Hawks Nest. They can be reported to the Facebook page or the Koala Hotline 4997 0878 or via an online form on the MidCoast Council website,” said Jill.

(This is all good news. Well done. The bad news is that koalas who thrive in Tinonee are being mauled and many are being killed by domestic dogs who are not kept indoors, or restrained, at night.  We know of families who have moved out of Tinonee because of the barking dogs at night.

Be aware there is a VERY hefty fine for allowing your dogs to be unrestrained and kill protected wildlife.  Ed.)