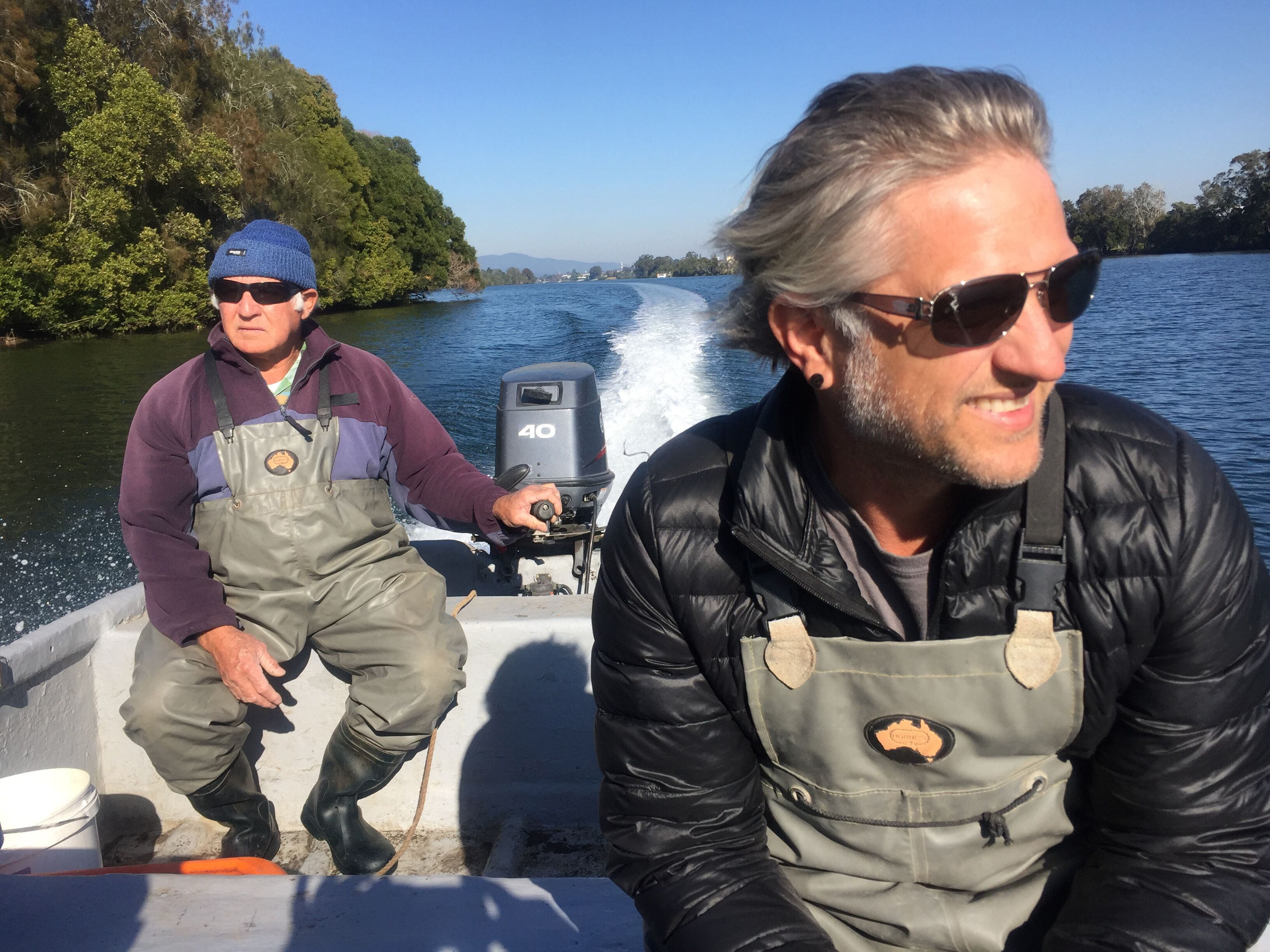 Manning father and son, Grant and Ray Saunders, star in a Tom Zubrycki film “Teach A Man To Fish”

A new documentary film set on the Manning River was a hit at the recent Sydney Film Festival. But Teach a Man to Fish is no ordinary fishing movie. Grant Leigh Saunders, an Aboriginal man who grew up in the Manning Valley, made the film  as a journey back to the region that he left 20 years ago, to pursue a successful life as a musician, film-maker and teacher.

roduced by Tom Zubrycki, the film is due to be shown at the Manning Entertainment Centre August 24. National Indigenous Television (NITV) plans to air it at a later date. Grant Saunders wants the Taree screening to “help build a bridge between black and white communities here”.

Already, Teach a Man to Fish is being talked about as a revealing window on Biripi country history, as seen through the eyes of one family’s tragedies and triumphs. It explores the relationship between Grant and his father, Ray Saunders, who runs a commercial fishing business on the Manning, that Grant’s grandfather, Horry Saunders, started in the early 1960s. The Saunders family broke free of the welfare system at Purfleet mission, only for Ray to be confronted by other challenges when the New South Wales state government, 16 years ago, declared a large portion of the Manning River, and other rivers,  out-of-bounds to commercial fishers.

Making a film about his two worlds proved to be a turning point for Grant Saunders. He has moved from Newcastle to Old Bar, where his father lives, so his two children – who Grant and his Norwegian wife, Gabrielle, fondly call “Koori-Wegians” – can learn about ‘their own Aboriginal culture’.

What drove you to make this film?

Grant: I knew the problems that Dad was having from changes on the Manning River. I wanted to make a film that would give fishing families their voices about the impact on their livelihoods.

There was another impetus. In my years living away from the district, I was feeling disconnected from my family and our heritage. So, I had to re-think the script. It had been in my background for so long that it was niggling me to make it. I re-wrote it more as a personal journey, looking at the politics around fishing, identity and racism, and to tell this through a father-and-son story. This became a way into the politics of a deeper conversation about national identity.

Ray, how did you become a commercial fisherman on the Manning?

Ray: I grew up in Purfleet, which had been established as a mission in 1900. My father, Horace Saunders, or Horry as everyone knew him, was seen as a ‘troublemaker’ in Purfleet. He had a great work ethic, but would not accept injustice. Horry had a fishing licence, but he had other jobs, working as a fettler on the railway, at the Wingham abattoir and on the Wallis Lake bridge between Tuncurry and Forster, that opened almost 60 years ago. Working as a builder’s labourer on housing commission houses in Taree opened his eyes to the inequality between conditions in Purfleet and houses in white society. In Purfleet, houses had no electricity, no running water and no sinks. There were open drains in back yards. Kids’ health suffered. Doctors from Taree took soil samples that were contaminated. They suggested the mission be relocated. It never was.

I was the first Aboriginal in this district to get the School Certificate. Up to my generation, access for Aboriginal kids to schools in Taree was left to the Parents and Citizens Associations. After I left school in 1965, I tried to get a job as an apprentice electrician with local employers. I never got any response except to tell me who’d got the jobs.

Grant: By the 1960s, the Aboriginal rights movement was starting, through the Federal Council for the Advancement of Aborigines and Torres Strait Islanders (FCAATSI), and then the emergence of Aboriginal leaders like Faith Bandler and Kath Walker (Oodgeroo Noonuccal). Horry got involved in this through unions and communist connections with the Labor Party.

Ella Simon, a distinguished Aboriginal woman at Purfleet, and Robert (Bert) Marr, an Aboriginal pastor there, persuaded Horry that his communist association conflicted with our family’s church involvement. So Horry broke away from the communists.

But, when Horry refused to pay rent at Purfleet over its deplorable housing conditions, the authorities wanted to make a show of him and charged him. Ray Peckham, an Aboriginal activist, got behind him. Peckham, who also features in the film, and a lawyer, Fred Paterson, took the case against Horry to the NSW Supreme Court – and won. It was the first case to be won by an Aboriginal person against the Aboriginal Protection Board. However, the board did not want to wear that outcome and Horry’s case was re-tried in the Taree Magistrates’ Court. This time the board won. This was always going to be the case. So Horry, wife Faith, and six sons and daughters, at the time, were forcefully removed from Purfleet to live in a condemned house in Tinonee.

Ray: I was 14 when we moved to Tinonee in 1962. We were the first family to move off the Purfleet mission into white society. The condemned house in Tinonee was an improvement on what we’d had at Purfleet, and Dad couldn’t get a house in Taree, because no one there would rent him one.

Tinonee was a good place to grow up. It had a very strong Christian community. I joined the Royal Australian Air Force in 1966 as a trainee aircraft engineer, and worked for about nine years, including two and a half years in Malaysia, during the Vietnam war.

There was a lot of racism against Aborigines everywhere. Fair-skinned Aborigines like me actually heard more racism than dark-skinned ones. When I was 18 or 19, I was having identity problems, along with the racism and the bastardisation that was prevalent in the forces at the time. I seriously thought of committing suicide. Then one Sunday morning, I woke up and decided that I was going to be a first class Aboriginal and not a second class white citizen, and walk in that direction for the rest of my life.

I wasn’t going to deny who I was because I had such a wonderful family. When I left the air force in 1975, I wanted to come home to be me, and not have identity problems. I thought I could help my family more by modernising my father’s fishing business, and create work for my six brothers. Because we don’t get the same level of government assistance that farmers get in times of drought or floods, and because of increasing fees and government restrictions, I’m still using a boat we made in 1978!

In the beginning, it was a prosperous life. When I started fishing, we could get all the way up to the Cedar Party Creek near Wingham, and all the way down the bottom end of the river. However, in 2002, about two-thirds of the Manning was cut off from commercial fishermen. The authorities reserved the bottom end of the river, closest to the ocean, for recreational fishers. Similar changes happened elsewhere in the state. It hit six Aboriginal fishermen in the Taree area, and four in the Hastings River further north, but it affected all small commercial fishing families, dramatically reducing everyone’s incomes.

We commercial fishermen are blamed for decreases in fish stocks. But it’s not that simple. Since white settlers arrived in Australia, farming and timber-getting have created all sorts of problems for rivers. Soils have washed into rivers, filling them with silt and clogging up the systems. The volume of water in rivers has decreased because of siltation. There are so many more things affecting the health of our river systems, including changing weather systems, pollution from farming and mining and land development.

Grant:  Just before the 2002 changes, my grandfather, Horry, received a NAIDOC [National Aborigines and Islanders Day Observance Committee] award for founding the oldest-running Aboriginal fishing business on the east coast. With the film, I wanted to make people aware of all the work that went into establishing this business, and how it allowed us to be independent from the welfare state. There’s always been a view that Aborigines are lazy, and live for free. But few people know that Aborigines actually paid rent at Purfleet – rent to live in squalor.

You also tell a more personal story in the film, especially from your school days?

Grant: I went to Cundletown primary, and was the first Aboriginal kid to get the Higher School Certificate at Chatham High School. I grew up with the same racist jokes that Dad had. In white society, Purfleet was still called a “zoo”. I got it from white friends who I thought were close, and it was because they saw me as one of them, a white person who was successful in work, and my family was seen as “an exception to the race”. One white friend asked me why I identified as an Aboriginal person when I didn’t need to. My appearance confounded people when I said I was Aboriginal and it still does to this day. This is another reason why this film is so important to me.

At Chatham High, during Australia’s Bicentenary year in 1988, I was asked to deliver the speech from the Day of Mourning in 1938, when Aboriginal people marked the 150th anniversary of the landing of the First Fleet, by calling for civil rights. I became very emotional inside, but I tried to pretend that it didn’t affect me. It was traumatic. Then I started to cry on the dais in front of the whole school. It all came bursting out. I think that’s where I developed depression later on. When I started writing songs as a musician, it was a form of therapy. It was about me asserting my Aboriginal identity.

At an early age, I felt I had something that I wanted to continue from my grandfather and agitate, like he did, for equality and social justice for Aboriginal people. That has also played out in my work as a filmmaker. I’ve believed every film I have made has to have a social impact, and not just for entertainment’s sake. It’s important to have both, to tell entertaining and thought-provoking stories.

I saw the introduction of Aboriginal studies to our school system in the early 1990’s, and thought positively about its potential in diminishing racism. Later, when I became a tutor in Aboriginal Studies at the University of Newcastle, from 2011-2015, I asked students, year in and year out, about 500-600 students in total, the same simple question: “What was your experience of Aboriginal education before university”? Sadly, I discovered from early school leavers that, while things have changed for the better in some areas, many schools still don’t teach Aboriginal history, society and politics to the level it should be taught, and some not at all.

The justification to teach Aboriginal content, it seems, is proportional to the population of Aboriginal kids enrolled at the school. So, where there are smaller populations of koori kids, the less likely it is that teachers and principals will teach it. It’s sad that many schools still don’t value Aboriginal education for the education of all students. It belongs to Australia’s history and culture. That’s another reason I made this film, because I want it to start important conversations inside and outside the classroom about racism, identity and social justice for Aboriginal people.

“Teach A Man To Fish” will premiere at the Manning Entertainment Centre, August 24.