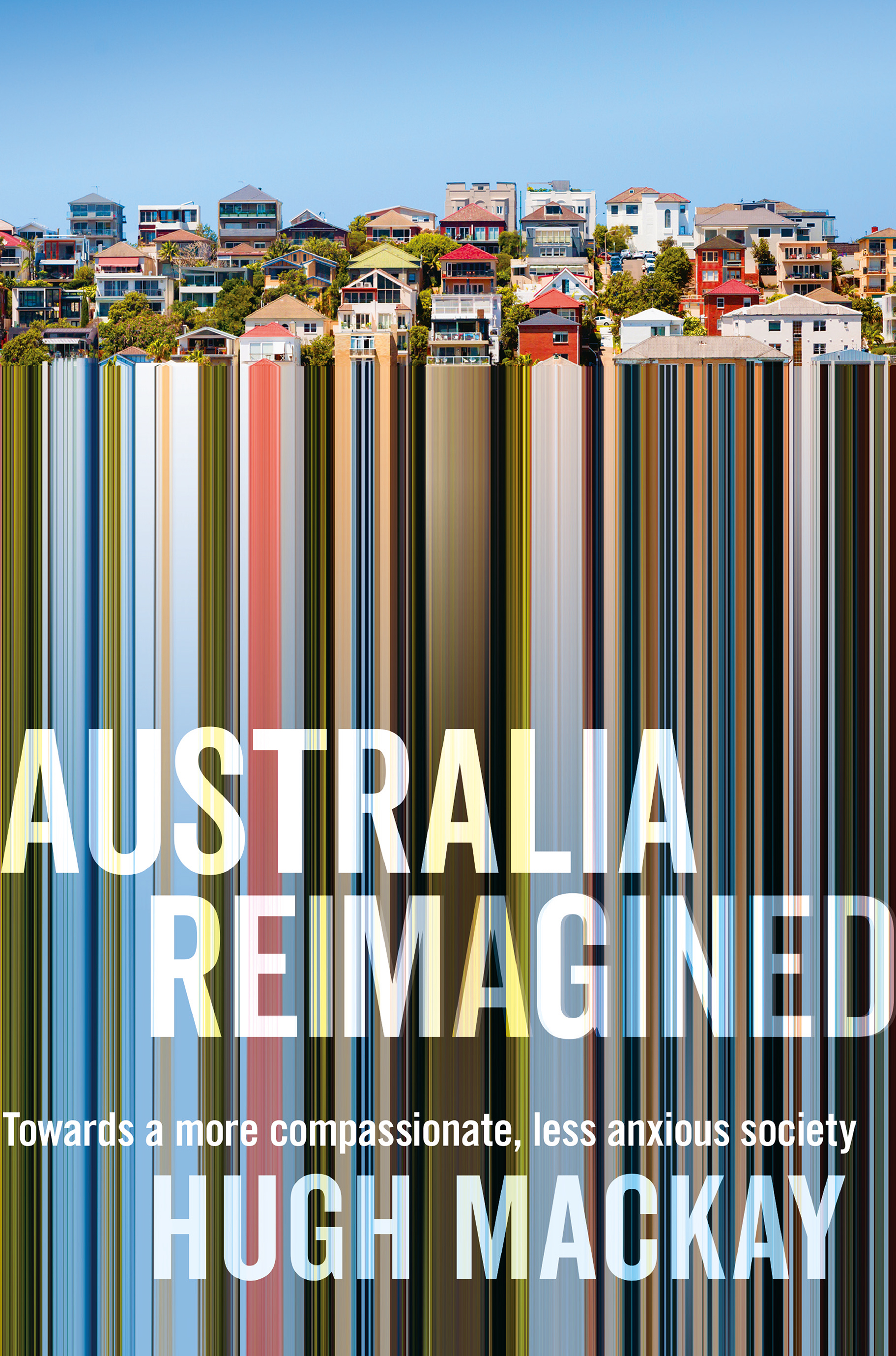 Hugh Mackay has spent almost his entire working life asking Australians about what makes us tick, what are our basic concerns, what gives us hope and meaning, why do we do what we do? His acute observations, honed by the skills of solid social research, have illuminated his readers for at least fifty years. His analyses have been unfailingly optimistic, accessible, crystal-clear and frequently provocative.

His latest book, “Australia Re-imagined: Towards a more compassionate, less anxious society”, is no exception. It extends his study of who we are and who we may become, challenging the better angels within us to build a more tolerant, compassionate and just society.

This book is a clinical examination of the heart of Australia, in the hands of a sensitive and experienced scientist. The diagnosis? Both good news and (some seriously) bad news.

The report has three parts:

A picture of a fragmented society, within which important connections are breaking down.

And finally, ‘Big Hearts, Open Minds’, in which the reader is challenged to imagine a new future built upon an innate decency.

The “heart” he examines is an anxious one. Our country is experiencing a troubling epidemic of anxiety. Cultural change has been swift and unpredictable. Income inequality is growing. The stability of our harmonious society is threatened by the attacks on cultural diversity. The gender revolution is stalling. Individualism is rampant. We no longer trust our major corporate institutions, political leaders, or our churches. We are deeper in debt and increasingly addicted – whether to our digital devices, drugs, or to buying ‘stuff’.

His arguments are supported by remarkable statistics. Firstly – about anxiety and depression:

One-third of us are likely to be affected by mental illness at some time in our lives.

Over 65,000 Australians each year attempt suicide.

Two million of us suffer from an anxiety disorder in any one year.

One million will be engaged in the silent battle against depression.

Australia’s unprecedented run of economic growth has failed to deliver a more stable or harmonious society. Mackay asks how, despite all of the natural advantages we enjoy (peace, affluence, stable parliamentary democracy, freedom of assembly, press, religion), we have reached this dramatic state of emotional breakdown.

Emotional breakdown is connected to the breakdown of community. As society becomes more fragmented, because of such matters as our fear of accepting change and failure to appreciate the qualities of those from different backgrounds, the pressure on our emotional life and our sanity becomes more intense. In some form of tragic spiral, this social dislocation breeds epidemics of anxiety, depression and obesity, which in turn lead to greater community disintegration.

However, Mackay identifies certain positive factors, which swim in an opposite direction. He calls this movement ‘convergence’. Evidence of this movement of convergence is becoming encouragingly apparent in politics, gender and religion.

In the political arena, there is a blurring of ideological differences between parties. All want to occupy ‘the centre’ of political opinion. In the gender revolution, we are edging closer (perhaps more slowly than some would want) to accept that male/female is not the simple distinction that we once may have thought. Even in conversations about religion, the traditional concept of ‘God’ is under constant review. Among attempts to bridge the gap between the traditional language of the past, and the searching beliefs of contemporaries, there is evidence of convergence. Inter-faith conversations are frequently more interested in similarities than differences.

Australia Re-imagined is an intelligent, balanced and detailed analysis of this country today. Its author challenges us to embrace the future as a ‘more tolerant, compassionate, and just society’. The appeal of this challenge is that it excludes no-one from being immediately involved. The clearest signs of the health of our country are to be found in the life of the local community. In other words, the deceptively simple responses to the issues in one’s own street and suburb.

One striking comment the author makes (almost in passing) is about attitudes and behaviour. Mackay reverses the popularly held opinion that attitudes can change behaviour. Change doesn’t work that way. It is in the alteration of behaviour that our attitudes change. When we act in a compassionate manner, we become more compassionate. Show me what you do, and I will tell you where your values lie.

The final section of the book is entitled ‘Big Hearts and Open Minds’, in which the author allows himself the liberty to describe characteristics of his ideal Australia – a place marked by tolerance, compassion and mutual respect – and invites the reader to join him in the exercise. His list includes:  valuing the small courtesies of life; respecting other’s opinions, especially when you disagree; generosity towards refugees; placing a high value on education, especially public education; making work more available to those who need it; a call to have institutions that we can trust to serve us rather than themselves, and so on.

Perhaps this exercise goes to the heart of the intention of this book. Mackay invites us to use our imagination – to re-imagine Australia. His suggestion – make your own list of what you want this country to become. The exercise of describing one’s own dreams for an ideal Australia might  be a significant way to enter into conversation with this fine book, and reflect upon our own response to its challenge..

Iris Murdoch claims that ‘paying attention is a moral act’. Looking at our society, looking at our institutions, even looking at ourselves with clear eyes and an honest heart, is such an act.

In Australia Re-imagined, Hugh Mackay provides a powerful guide for us to pay attention to what is occurring under our very noses. Such attention is the first critical step towards significant change.