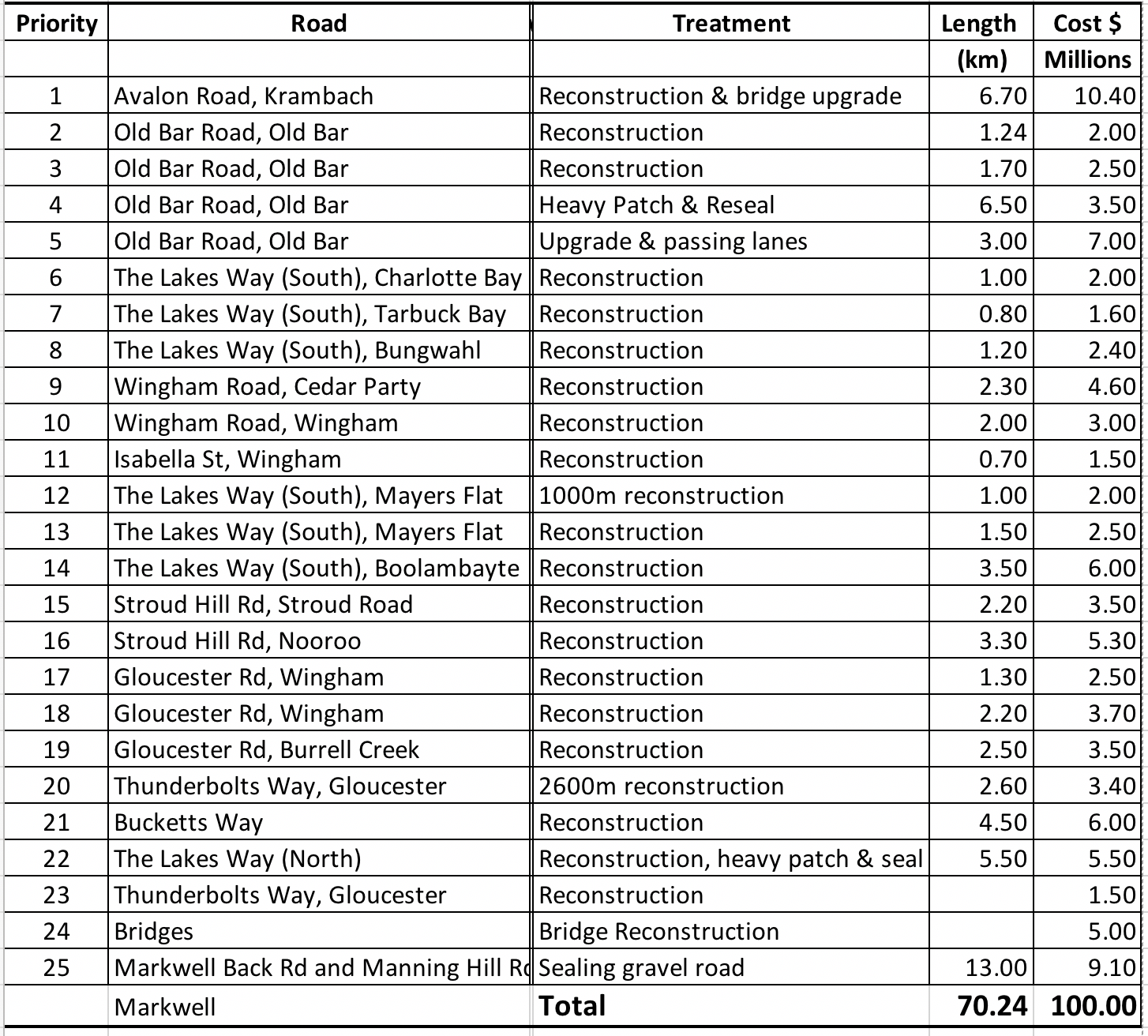 Councils in Australia were all about the Three Rs – roads, rates and rubbish.

MidCoast Council was always about the roads. And the bridges!M

But suddenly it’s raining big bucks on our roads and bridges.

A year ago, Council threw $50 million into the kitty towards road repairs. As election time looms, the disgruntled electorate is suddenly being courted by our State Member, and the heavy-weights from the State Cabinet, headed by our new best friend, the Premier, (“our Glad”?) who descended on a right-royal visit to our electorate, showering promises and dollars.

There was a lot of smooth talk along the way, with the photo ops and pledges. But, for a constituent to actually shake a hand or curtsy and mumble a small complaint, (in the nicest possible way), forget it!  Minders, bureaucrats, big wigs and big noters surrounded the visitors to keep them away from the irritating MOPs. (Overheard . . . “No MOPs allowed inside, keep’em out, keep their distance…”  Translation: MOP  – members of the public. That’s you and me.)

Of course, if you did actually want to whisper in any of the big wig’s shell-pinks, you could buy a ticket for $5000 to a special dinner.

Later, you might read about it (in no great detail), in the local press, how nice it was to see the Mayor trumpeting the $100 million that Council has given to fix the roads.

No, actually, that’s $50 million from Council, an amount which some financial experts believe is now estimated to be way under budget, plus the $50 million slung from the State government, so we know to “do the right thing” come election time.

We’re not knocking it but, given Council’s rubbery maths, they might want to up the ante a bit, budgetwise.

We’re a regional rural area of close to 10,000 square kilometres. Our quaint and rustic winding dirt roads might be considered scenic to visitors, but they’re a pain in the neck to residents.

Of course, some historic and scenic bridges should be kept, ‘though fortified and made safe, but the roads have been a disaster, as have the patched up potholes that disintegrate in the first good rain. Occasionally, an outside contractor has come in to fix a kilometre of road, and done it properly . . . and boy, can you tell the difference.

By the time GTCC folded due to amalgamation, the backlog of roadworks was something like a $300 million-plus black hole. So, we are grateful for every cent we can get towards the roads.

But my road ain’t on that list above, so we just hope that whatever jobs are done, are done properly, so at least I might get a year out of my tyres for a change. (Note to the new GM  . . don’t bring a fancy Italian sports car up here!  Hopefully, he’s a good bloke who drives a sensible vehicle!)

So, a tick to Council for starting on the Roads.  They’ve got the Rubbish sorted. Now that just leaves the Rates . . . which we know are being raised under our ridiculous SRV (Thanks Mr Handford).

Now, if they could at least put our extra rates towards the hole in the road budget, I wouldn’t mind quite so much.

We are very happy about the extra money for an addition to the Taree Entertainment Centre, and Manning Base Hospital, . . although we desperately need a Cardiac facility (Cath lab). Certain matters are being discussed in back rooms, and we’ll bring you more on that next month.

It’s All Very Well, But

Each Council area was sprinkled with a bit of fairy dust, and there’ll be more to come, closer to vote time, we reckon.

What we really want, however, is sensible  co-operative thinking and planning from people with knowledge and experience. Who are working for us, the electorate, and not themselves.

It is, sadly, an attitude that can grow as a seed at a council, and climb upwards, until it is a ‘given’, and we all just accept that people in public office, go hell-for-leather for themselves, their backers and special interest friends, when they can, while they can, because they can.

All of us need to speak up, and put our votes where we think they’ll do more good. Don’t think there’s “nothing we can do”.