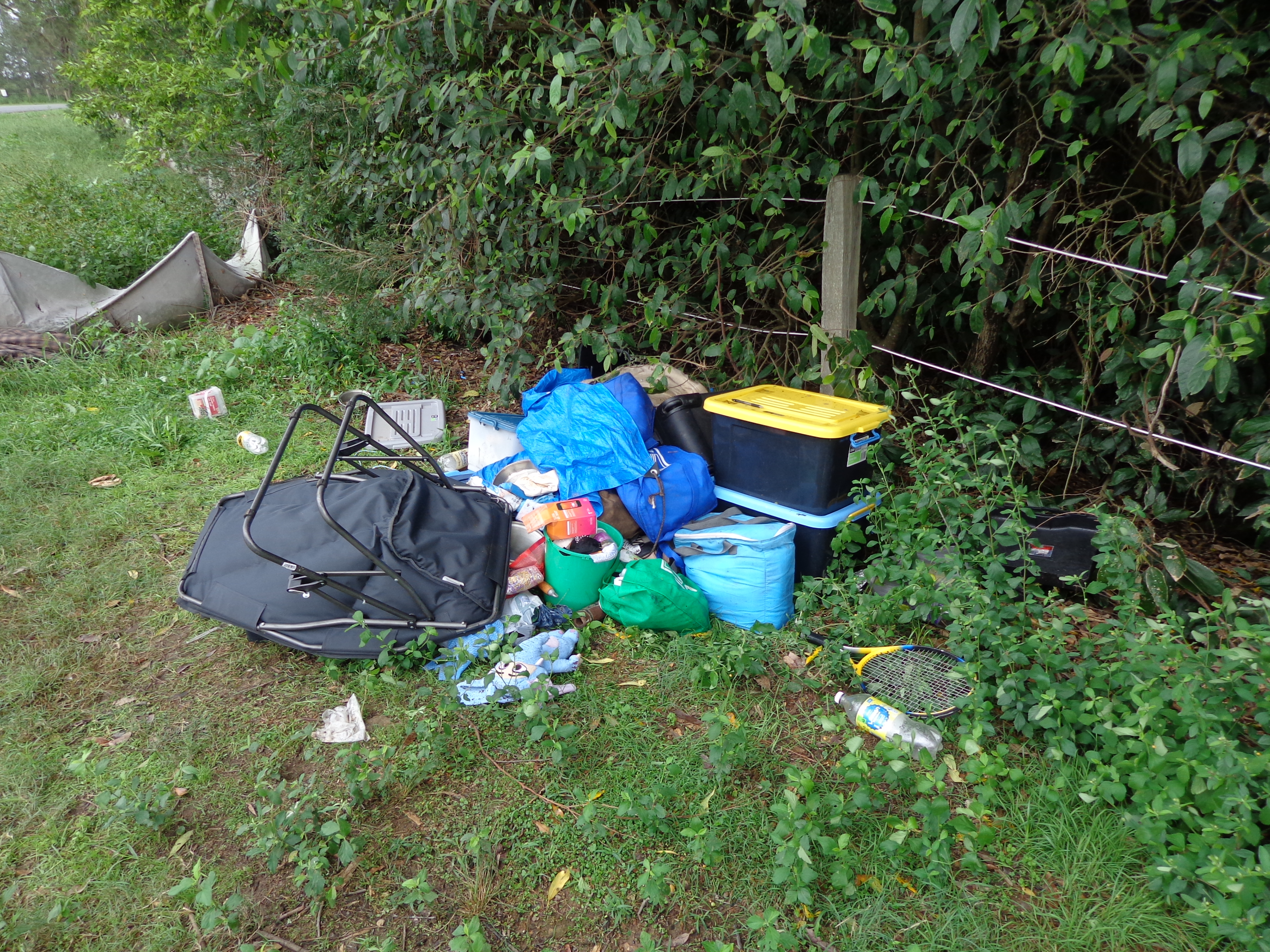 The Wingham Brush Nature Reserve has always been a place for local people and visitors to spend a day picnicking, fishing, putting a boat in the river, walking through the Brush.

But, since a small local, self-appointed group, WAG, the Wingham Advancement Group, has stepped in as defacto arbitrators of what they call, The Wingham Riverside Reserve, and promoted overnight camping, actively encouraging the RV friendly sites, the place has gone to hell in a handcart.

The one-night only stay has gone by the board. Local homeless people and drifters are spending weeks at a time in semi -permanent chaos, where their kids and dogs run wild, there are fights, and the Brush abused (defecating in the Brush and pulling out wood for uncontained campfires, of which we have photographs).

WAG member Ron Sky, who volunteers to clean the Bbq, picks up trash and welcomes campers, gives backpackers and “grey nomads” a ‘Welcome to Wingham’ sheet, with the ‘phone numbers of the police in Taree, to call when matters get out of hand in the night.

He insists that the backpackers and campers are never any trouble. Ron complains of a local who arrives late every night with beer and take-away chicken, and tosses the boxes and bottles onto the grass, by the toilets, in the same spot, and disappears.

And, as to the local wayward campers, Ron Sky says, “There is nothing we can do. Council and the Police say, unless they break a law, we can’t move them.”

President of WAG, Allen Valentine, says, “There have been homeless people, locals and from other council areas, camped at Wingham Riverside Reserve (WRR) on occasions. People who camp at WRR are the responsibility of MCC Rangers, who have the authority to move them on and/or arrange shelter for them with community organisations.”
(Maybe someone should notify the Rangers after such people have been there several weeks? )

WAG,  since it “took over” in 2008, applied to Council to upgrade facilities, getting an electric BBQ and tarting up the toilets.

Now WAG has obtained a NSW government grant of $102,800, to “upgrade” facilities at their unofficially re-named Wingham Riverside Reserve.  The grant was applied for by Mr Bill Kneipp of WAG, and Mr Ken Patterson of Wingham Rotary, who had been a member of Taree Rotary for thirty years, but has now curiously, moved to Wingham Rotary.

Mr Valentine states that “The MCC had oversight of the grant application, and submitted it to NSW Government as required by the application criteria in “Stronger Country Communities Fund”.

However, WAG has applied  for this money to go directly to them.

States WAG President Allen Valentine, “As the lead (self appointed?) organisation with appropriate financial credentials, WAG will manage the project locally from tranches assigned from MCC, as milestones are met. WAG members will complete volunteer work as required under the supervision of qualified engineers and tradespeople. A qualified project manager will supervise and certify all aspects of the project, before cheques are issued,” he said.   “The WAG Project Co-ordinators will complete the day-to-day requirements of the project under the supervision of a project manager, who has the confidence of MCC, due to experience on previous projects. Quotes will be sought to establish the best value contractors.”

Why? Wait a minute.

Has WAG, or these unknown ‘project co-ordinators’, liased with the National Parks and Wildlife Service, who gazetted the Brush in 2000? Or the Minister and  Department of the Environment, who formally adopted the Wingham Brush Nature Reserve Plan of Management in 2003?   A NPWS Nature Reserve has a higher level of legal protection than does a National Park.  A Threatened Ecological Community (TEC), on top of being a Nature Reserve, is the Everest in conservation protection and legal standing. Does WAG know better?

Who is going to oversee WAG’s efforts? Who will maintain these “improvements” afterwards, and pay for them?

WAG insists they have “consulted the Wingham Community.”

How did a volunteer group with 22 members, and the same president for the past 11 years, amass all this power? And, while they are mostly retirees, even if “young at heart” as Mr Valentine insists, who is going to scrub the barbie, pick up the poo and all the other rubbish when they are no longer around?

The toilets have been upgraded, there is an electric barbeque, now there are to be hot showers and better parking facilities. For how many? This is not a large area! It’s totally unsuitable, congested and most inappropriate as a camping ground.

Mr Valentine points out also that WAG has promoted their Wingham Riverside Reserve as,  “the premier destination for ‘grey nomads’ and other travellers, as they move up or down the east coast, using ‘Wikicamps Australia’, the CMCA omnibus and other travel websites, as their guide.”

The ban on overnight camping by Council in 2012, (somehow overturned or ignored by WAG), was something of a deterrent to matters getting out of hand.

Most campers use Wingham or Taree Showground, for a modest fee per person  as they have oodles of  space and shady trees, terrific facilities, and are pet friendly.  They are properly run and managed.

Visitors can still enjoy the Brush and the Reserve on foot, by bike or car, as they explore the town.

WAG’s biggest claim for the need for this horror at the river is that “Visitors spend money in the town.” And they have the receipts to prove it.

So, people staying at the Showground won’t do the same?

Why on EARTH are we allowing this pressure group to exercise such disproportionate and unjustifiable power?

My grandfather must be rolling in his grave.

We need to have the police regularly patrol the riverside area, and a walk through the Brush now and then, especially during school lunch time, would be a big help.  Wingham Brush remains a focal point for drug deals, tragically involving our High School Students.  Better yet, we need a full time presence back at Wingham Police Station.