Our nutritionist, Lydia Irving, introduces us to The Small Intestine 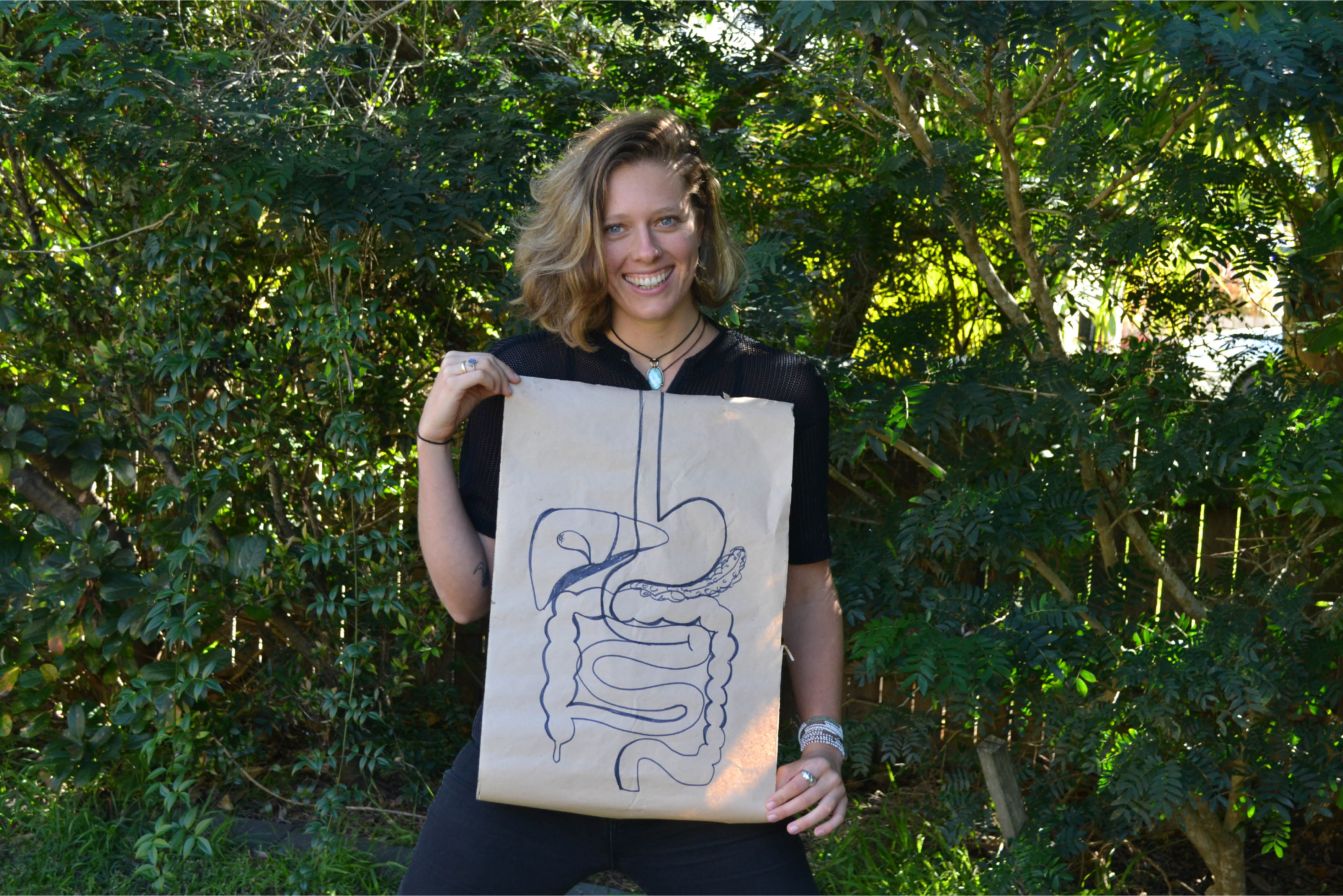 Here we are at the small intestine, in the Fourth instalment of my Guide to Good Digestion. Parts One, Two and Three of our journey down the digestive tract are available on my website, if you need to catch up (www.internal-instinct.com). By this stage of the digestive process, the mouth, stomach, liver, gallbladder and pancreas have broken down macronutrient (proteins, fats and fibres) food bits into micronutrients. Now it’s time for those useful micronutrients to be absorbed into the blood and all travel around the body and help keep us healthy and fuelled! This absorption mostly occurs in the small intestine, just after leaving the stomach.

The small intestine is like a giant snake in our abdomen: it’s a long tube which wiggles through the abdomen from the end of the stomach to the large intestine in the lower right hand side of the belly. The small intestine snakes around the midsection of your belly, folding over and around itself dozens of times, and is often the ‘visual’ that appears in horror movies as ‘guts’. It is easily the longest section of the digestive tract, with some individuals having a small intestine measuring three metres long, and some having up to ten metres. I like to think that, because I am 188cm tall (6 ft 2, for you imperial folk), my small intestine is longer than yours! However, that’s just my competitive nature showing and, honestly, I have no idea if that is true.

The top section of the small intestine is called the duodenum, the middle section is the jejunum and the last section before reaching the large intestine is called the ileum. In the duodenum, some more enzymatic digestion (macronutrients being turned into useful micronutrients) happens (still!) with the help of the liver, gallbladder and pancreas. The jejunum and ileum are where we absorb most nutrients into the bloodstream.

What bloating and the real cause of a rumbling tummy?

As I mentioned earlier, the small intestine is where our micronutrients are absorbed into the bloodstream. The small intestine is lined with finger-like projections called villi, which are covered in even smaller finger-like projections called (ingeniously) microvilli. This design increases the surface area of the inside of the small intestine, maximising absorption of nutrients into the bloodstream. The villi also create a wave of motion, gently pushing the contents further down the digestive tract.

As well as the villi, the wall of the small intestine is called the mucosa, and is made up of cells called simple columnar epithelium (don’t worry about the name – there won’t be a quiz at the end!). These cells are held together by proteins called desmosomes, which link together the simple columnar epithelium into an impenetrable chain fence. The walls of the small intestine are incredibly important, since they help to keep undigested particles or bacteria from entering the bloodstream, and hurting our wellbeing.

Unfortunately, the foods and lifestyles we are currently exposed to are damaging this delicate lining of the small intestine. A modern western diet may be high in flavour but lacks in digestibility, meaning it’s extremely difficult for our body to digest these foods. For example, the protein gluten found in some grains often causes digestive issues, because it cannot be broken down by the human digestive tract alone. It needs to be broken down outside the body by a process of fermentation (such as in sourdough bread) first. When we over-consume a range of products that are difficult to digest (like non-fermented gluten), this damages villi and creates holes in the walls of the small intestine by breaking apart the desmosomes holding the cells together.

Why is gluten bad?

So what really is the problem with gluten? Why does it make so many people unwell?

Humans have no enzyme to break gluten down. Remember, we have specific enzymes capable of breaking down specific foods. Enzymes convert food into micronutrients ready for absorption. For a deeper explanation of enzymes, refresh yourself with my previous articles.

Now, because we have no specific enzyme that can effectively break down gluten, it makes its way into the small intestine undigested. Gluten influences the body to release a chemical called Zonulin. Zonulin breaks down the desmosomes (proteins holding the cells together) in the body, starting with the small intestine, and eventually making its way to the rest of the body. This is what we call ‘leaky gut’, or intestinal hyperpermeability. This means that all the contents of your stomach can enter the bloodstream, whether or not they’re ready for absorption.

When undigested foods enter the bloodstream, it triggers an immune response. This immune response – called food intolerance – is an attempt to remove undigested foodstuffs out of the bloodstream to protect the body. Unlike an allergy, which causes an immediate reaction like anaphylaxis, a food intolerance is a protracted and cumulative immune response. The intensity of the immune response, and the signs and symptoms, are unique to every individual, but a common condition is inflammation. This can vary from physical pain to autoimmune conditions, to skin flare ups, and everything in between. Food intolerances are often not taken as seriously as they should be, because they can often contribute to chronic pain or illnesses if not addressed. Helping clients to understand and manage their individual food intolerances is one of the most common things I do in nutritional consultations, and it can have an amazing impact on your wellbeing.

One quick note before we move on, don’t feel the need to suddenly cut out all gluten after reading this! Gluten-free products aren’t necessarily a ‘healthier’ alternative for everyone, since all grains have the capacity to upset the health of the gut – especially if your gluten-free replacement is highly processed. So, instead of running away from gluten today, the best option is to start researching how to prepare food for easier digestion (like eating sourdough bread, where the gluten is fermented into a form capable of digestion).

Our small intestine is home to about 1000 recorded species of microbes (bacteria, fungi, yeasts and parasites). It might seem like a lot, but in next month’s article on the large intestine, I’ll explain why 1000 species is actually a really small number.

When undigested bits of food make their way into the small intestine (this happens when the previous stages of digestion are compromised, or when eating foods we cannot digest ie. gluten) the food feeds a range of microbes we don’t want thriving in our small intestine. The result is an overabundance of unhealthy bacteria, known as Small Intestinal Bacterial Overgrowth (SIBO). These bacteria feed off sugar in the food, and create gas that builds up and distends the gut (and makes you burp and fart more).

This process is identical to fermentation that occurs outside of the body – like brewing beer. To make beer ‘fizzy’, you add sugar (in malt) to feed the microbes inside. When this process is contained inside a bottle or fermentation vat, the pressure builds and the container can become explosive – like some people we know!
This is not the only cause of bloating but is a very common one. Other causes of bloating may be severely inflamed organs in the abdomen, a buildup of fluid or excessive fat stored around internal organs. These are all much more severe causes of bloating and require further investigations.

Have you ever wondered what that gurgling rumbling sound in your tummy is? It’s often thought to be the gut telling you that you’re hungry, which is half true. More accurately, it means your small intestine is completely empty of stomach contents. When this happens, normally around three hours after a big meal, a wonderful fluid called chyme (pronounced kyme) cleans our small intestine to keep it healthy. The chyme (which is acidic and made of gastric juices) gushes down our small intestine, sweeping up any residual food bits left behind in the crevices of the villi. It’s the chyme fluid rushing through your small intestine that makes the rumbling in your tummy!

This cleaning process also stops bacteria or microbes from getting out of control, preventing the Small Intestinal Bacterial Overgrowth I mentioned before. So, be thankful for that tummy gurgle, because it’s a sign your gut is cleaning itself to keep you healthy. And if you want to take better care of your guts, extending the gaps between meals (instead of continually snacking) allows your small intestine to empty and invites chyme to clean it.

We have covered only a few neat features of the small intestine here in this article.

The main takeaways from this article:

The small intestine has a large surface area to absorb adequately prepared nutrients into the bloodstream.

Gluten damages the walls of the intestine and causes “leaky gut” which leads to food intolerances and chronic inflammatory diseases.

Too many of the wrong microbes in the small intestine cause bloating and  discomfort in the belly.

When your tummy is rumbling this means it’s being cleaned.

We’ll learn a whole lot more about the special microbes that inhabit the digestive tract in my next article: The Large Intestine. See you then!