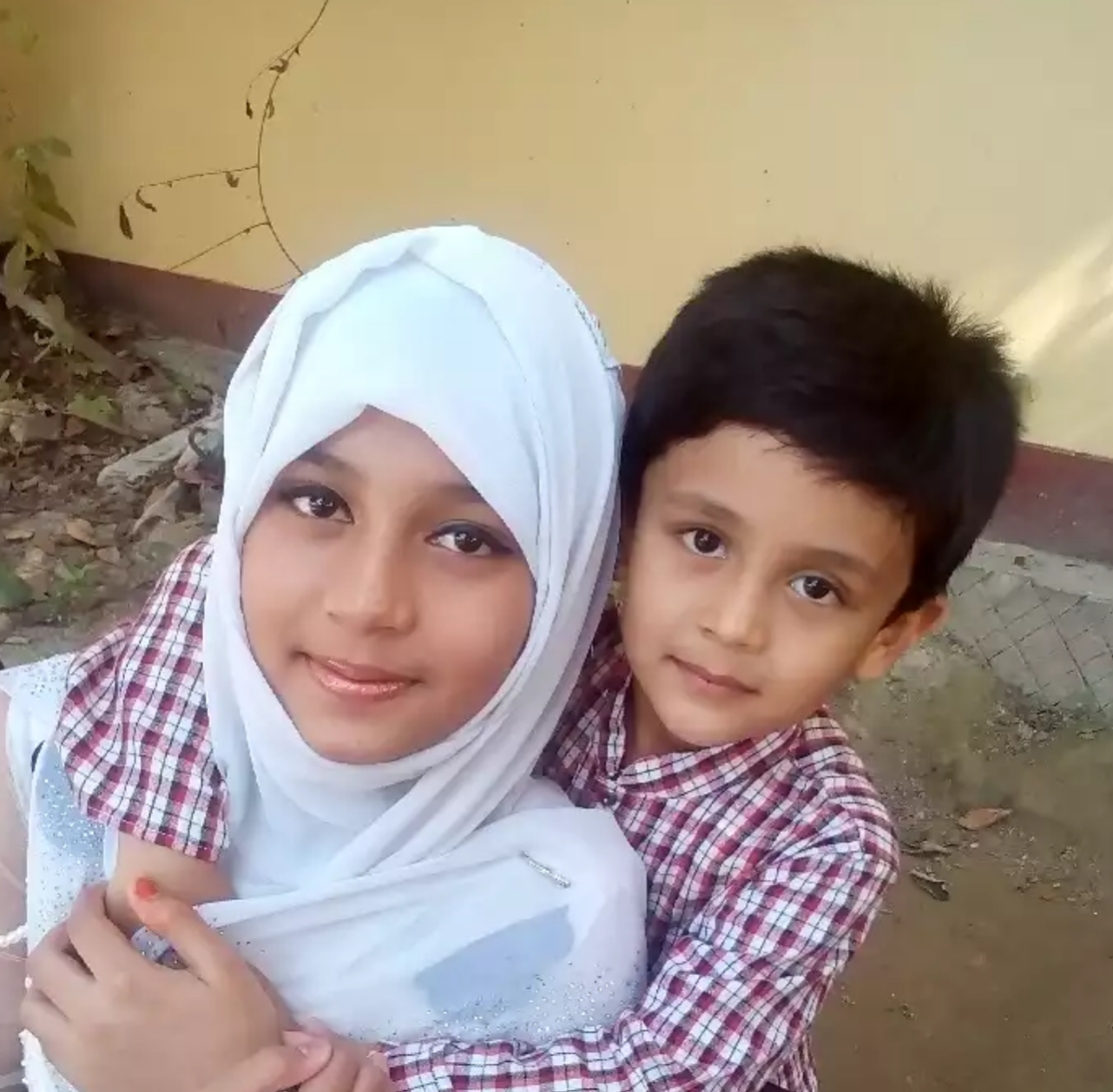 Her children, Ramisa and Faisal

This is a personal account of just one Rohingya girl . . . tragically, there so many many more caught in the same cycle having fled Myanmar.

Hundreds of thousands of stateless Rohingya families crossed the Naf River into Bangladesh, escaping from Myanmar with hope of a life that was free from fear, trauma, assaults and persecution.  They have spread out around the neighbouring country in Bangladesh and, with the help of relatives who came before them, managed to put a roof over their heads. They live mostly in Teknaf, Cox’s Bazar and Chittagong, and the majority survive with money they receive from relatives who are in other countries.

A lot of them hold fake Bangladeshi documents, in order to send their children to school.  It is the dream of parents for the children to gain an education, something they never had themselves.  Most of them live in rented houses, but a small number have bought some property through the help of their Bangladeshi friends and relatives. Buying possessions is one of the critical processes for these families as, because they are stateless. they have no valid papers to obtain anything like a piece of land.   Sadly though, others try to take advantage of their circumstances, particularly with legal issues.

Despite enormous difficulties, a small number of families have managed to set down their family roots in Bangladesh. However, life has not been kind to all of them.  My friend, Jainab’s, is one such family.

Her parents escaped from the Myanmar military’s brutal regime, and Jainab and her younger sister were born in Bangladesh.  Using people smugglers, her father went to Saudi Arabia to earn money to support his family, so they could survive in Bangladesh.  Her father worked hard. and helped his relatives, as well as his countrymen, for many years.  He opened a chicken shop in Makah, Saudi Arabia, and everyone used to call him Murgaoi, an Arabic word which means ‘the owner of hens’. He had lots of friends from many countries, and received support and help from his Saudi Arabian friends whenever he faced problems.  Nevertheless, he could not continue to run his business, and he was forced to return to Bangladesh, in order to protect his family, particularly his two daughters,

as there was no one to look after them.

When he returned to Bangladesh, he overcame all the difficulties faced by stateless people, and bought a tiny piece of land at great cost, in Chittagong.   He would always feel pressured to pay extra, as he knew it was the only way to keep from being questioned about his identity, that way, concealing his statelessness.

He began from scratch, once again, and was raising his family well.  Nevertheless, the constant fear of not belonging to this country left in him a state of extreme anxiety. He lives his life under threats by local gangs. His family, along with many other Rohingya families, endures a significant number of obstacles in total silence, as they know that justice will not be served for them, and their voice will be lost in a cycle of power, money and legal matters.

One of the common ways to strengthen their family’s roots in Bangladesh, is to marry people from outside their cultural group.  So, some Rohingyan girls are marrying Bangladeshi men, and the men are marrying Bangladeshi women. There is no harm in mingling with a different culture. However, the real dilemma surfaces when things go wrong with a marriage.  Jainab is one of those Rohingya women who are victims of this type of situation, and her life is being totally ruined.   Because of her statelessness, there is no legal recourse, and she has been left with no place in this world, with two children.

Jainab fell in love with a Bangladeshi man when she was just 14.  His name is Marshal Kamrul Hasan Choduri from Okia, Cox’s Bazar, Bangladesh.  He was living with his sister, who was a wealthy person, in Chittagong.   He looked after her business affairs, as she had lots of projects in many other places in Bangladesh.

Marshal met Jainab at a wedding.  After he gained more information about her, he started following her when she went to school, and got close to her through her friends.  They started meeting secretly and fell in love.  They escaped after a few months and got married, without their families’ approval, on the 28th of January 2006.   Jainab’s father was devastated, as he knew Marshal and, if he had known about their love affair, he would never have let this happen. Marshal was not only addicted to alcohol and drugs ,but also he was spending his sister’s money on many other women.  It was too late, and there was nothing Jainab’s father could do to protect his daughter.

Marshal and Jainab lived in Chittagong for a couple of months with the help of friends. However, they could not keep up living in the city, and they had to move to his father’s house in Okia. It was seven hours’ drive from Chittagong, in the countryside. She trusted him implicitly, but he kept details of his past to himself.   Their love disappeared, as the reality of his personality took over.

She was abused, beaten and tortured, and her husband forced himself on her most nights when he came in the middle of the night, drunk.   She became pregnant at age 14 and, because of her statelessness, she had no rights. Jainab put up with all of this, without saying a word to anyone.   To make matters worse, Marshal’s mother came to live with them occasionally, and she made Jainab’s life even harder, as she didn’t bring a dowry to the marriage.  It is widely practiced traditionally that the bride’s parents will provide a dowry, which will contain all the necessary furniture, clothes for immediate members of the groom’s family and, from time to time, the grooms demand motorbikes or cash.  Furthermore, brides are expected to provide the wedding ceremony, which will include at least 500 people just from the groom’s friends and family, and there will also be people from the bride’s side to add to that number of guests.    The parents of the bride are expected to pay all expenses.

The bride only receives a Mahr, a mandatory payment, in the form of money or possessions, paid or promised by the groom to the bride at time of marriage, that legally becomes her property.  While the Mahr is often money, it can also be anything agreed upon by the bride, such as jewellery.  Mahr is typically specified in the marriage contract, which is signed during an Islamic marriage.

Jainab was overcome by considerable pressure from multiple directions, which made her attempt suicide twice within a year.   Her life was purely heartbreaking, cruel and unimaginable. She didn’t mouth a single word about the deep wounds to her parents, as she felt as though she closed all the doors for herself by disobeying them. However, Marshal’s uncle, who was the only family living next to them and witnessed every trauma which Jainab experienced, informed Jainab’s parents about her horrifying life. He told them everything.  Her parents took her back with them from the hospital, following one of the beatings she endured.

Being back in her parent’s house provided time for her rehabilitation.  She gave birth to her first daughter on 11th of December 2006, in her parent’s home in Chittagong, and named her Ramisa. Marshal didn’t come to see his first daughter.   Although they were apart for almost a year, they still kept in touch. Despite having endured insufferable experiences, her love for him made her forgive him, and she gave him one more chance. Her parents couldn’t see a bright    future for her with him, but they accepted it for the sake of Jainab’s newly born daughter.  They got back together with the help of family members from both sides.  Marshal took them back to his father’s home, and Jainab’s parents sent a lot of things for them.  Even though her parents visited and looked after them, things didn’t work out between them. She couldn’t keep things to herself this time, because of her young baby daughter, and she escaped.   She came back to her parent’s house, and lived with them for many years.

Marshal visited them from time to time, but didn’t stop his vicious acts towards her, even in her parents’ home, and made her pregnant again, against her will. He would come to threaten her with his friends, which also caused a lot of trouble for her parents.  He knew, because of their statelessness, there was nothing they could do legally to stop him.

Jainab gave birth to her second child, a boy whom she named Faisal.  She now lives in her parent’s home with her two children. She thought she had found the love of her life, and all she wanted was her marriage to work so that they could live a simple, happy life with their children.

Jainab said that she is not officially divorced yet, but she has not been in touch with Marshal for almost five years. She said  “It doesn’t surprise me that I didn’t receive even a wedding ring, what really breaks my heart is, as a father of two children, not once he has picked up his ‘phone to speak to his kids. On top, he has not sent a single coin for them. I now have realised that it was the biggest mistake I have ever made in my entire life. However the best thing that came out of my marriage is my children. They are my whole world and have brought a reason to live my life. All I want now is to send them to school so that they can grow up like other children and speak for themselves for the life which is ahead of them”.

Jainab is not alone.   There are many Rohingyans who are born in Asian or Middle Eastern countries like Bangladesh, India, Thailand, Malaysia, Saudi Arabia or Dubai, who feel a sense of belonging to these countries, as they have lived there all their lives.  However, the reality is that these countries don’t allow anyone to become a citizen.  Not being recognised in their own country, and certainly not in the country where they now reside, thousands of Rohingyan families find themselves isolated when it comes to seeking legal assistance for issues such as Jainab and her family experienced.

Statelessness places people in an extremely vulnerable position.   It affects the way they live for the rest of their lives.   A better world would be created for them if they were able to find safety in a country where they could eventually become citizens.