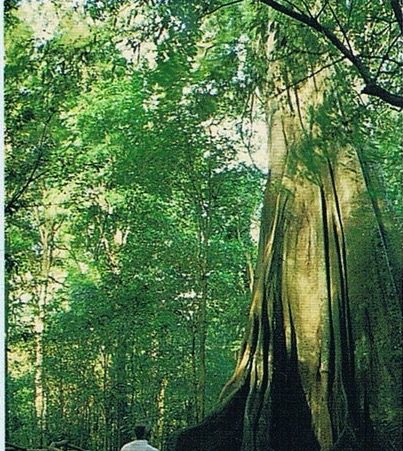 Following feedback from our concerned community over unauthorised plans by the self-appointed WAG (Wingham Advancement Group) to turn the iconic Wingham Brush Nature Reserve into a defacto congested camping ground, Mike Thomas, a representative of the National Parks and Wildlife Service, which is responsible for the Brush, and a Midcoast Council Representative, Daniel Aldridge, met informally with some local citizens and some members of WAG.

This sensitive area of protected flora and fauna, and a recreational area for the local townsfolk, has been hijacked by members of WAG who, they tell us, have good intentions of raising money for the town by allowing free camping.

Originally WAG’s plan was one night only stopovers for RV’s. WAG collected receipts from visitors to show they had spent money in town.

WAG wrote and advertised on camping and grey nomad internet sites and, naturally, the word soon spread about the tranquil, attractive, free spot at Wingham.

The site is now jammed with vehicles, tents and itinerants. Locals can’t park, have trouble unloading  their boats, or enjoy a peaceful picnic.

The view of the river is obstructed by vehicles who stay for extended periods as do campers in tents, their dogs and kids run free in the Brush, uncontained campfires are being lit with wood dragged from the brush and despite the proximity of a solid, toilet bunker block, built to withstand floods, at the Brush riverside, some campers were squatting in the Brush to defecate etc.

Camping Not Part of The Plan

WAG had an original agreement with the then Greater Tareee City Council in 2006 for plans for the Wingham Foreshore Reserve and Mick Tuck Reserve but there was no mention of camping.

Little seemed to eventuate until recently when Council amalgamated and WAG, led by President Alan Valentine (who has held the position for the past 11 years) made their move to promote RV stays at what they renamed the Wingham Riverside Reserve.

However last year a joint proposal between WAG and MidCoast Council was applied for under the Stronger Country Communities Fund (SCCF) which, in the 2018 Guidelines states is “to provide the kind of infrastructure that improves the lives of local residents.”

However given the plans in the proposal from WAG for the Wingham Brush Reserve,  they’ve drawn a pretty long and questionable bow in meeting these guidelines.

In their proposal for the Wingham Brush Reserve, are included  –

A proposed $50,000 worth of earthworks without any regard to landforms in a floodway, directly adjacent to the Threatened Ecological Community, removing a raised area and then sticking it into a low spot (carrying high velocity current in flood times). Local knowledge questions if this could be stable or not and result in erosion of the TEC.  There seems to have been neither expert advice nor common sense applied.

TEC trees are to be “pruned” which is interpreted by locals to mean “removed” to make way for more vehicles, setting these back into the Threatened Ecological Community.

There was a preposterous  proposal for a “black water dump point” ( in a floodway??? ) but apparently this has already been knocked on the head. ( As apparently is the intrusion into the TEC to make room for more “self-contained” RV’s. )

WAG want to knock down the existing toilet block and build another, presumably with hot showers. Quotes have already been obtained and sent to Rotary stalwart Ken Patterson in Taree, though there is no mention of Rotary being involved in any way. The WAG project person is Bill Kneipp.

Speaking to sophisticated builders I am told the standard practice is to obtain the grant money but pay less for the service or item and “use” the remainder. Or, the residual funds can be applied to another project where a complex project is simplified or cut short and the funds redirected.

Clearly this is the development of a campground when we already have a good facility at the Wingham Showground. There is no DA for a campground at Wingham Brush Reserve in WAG’s proposal nor any support for it in the Plan of Management.

WAG harp on about the economic benefit to the community, when most of us can only see the  destruction of a precious, loved local nature spot.

Visitors, RV owners and campers at Wingham Showground will spend the same money in town wherever they stay.

WAG had the original backing of leading Wingham businesses… one has to ask did these businesses know of the extent of WAG’s plans to take over our riverbank picnic area and turn it into a congested camping ground?

Combined with local homeless and squatters staying at the Brush Reserve, campers are now staying for weeks at a time, with no limit now on how long vehicles can stay, so the whole place is a mess with plans to make it even more so.

And it will end up costing the community the bucks to maintain it all.

The wider community was NOT consulted by the 22 member strong WAG group.

It’s time to call the whole thing off, well intentioned as WAG may have been. Mr Bromhead must step up. The Minister for the Environment has also been contacted to bring a halt to this desecration.

Perhaps WAG never saw the consequences of their plans but if it is not stopped now we can kiss the rare and (supposedly) protected Wingham Brush and our peaceful pretty riverfront reserve goodbye.