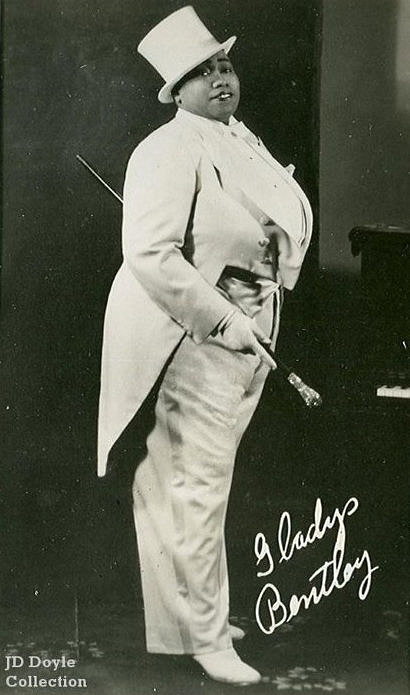 Gladys Bentley.  The police tried to shut her down in 1934 due to her lewd songs and jokes.  She was a pianist, blues singer, and entertainer, a black working class lesbian from Philadelphia, and too much for mid-town New York.  Her voice was legendary, and  daring.  She was called a “torrid warbler” in a Harlem guidebook.

Well, the book is really about feisty women:  marvellous women who, throughout the ages, refused to be nice, stood up to venal or bullying people or authoritarians who wanted to keep women quiet, placid, apathetic and, well, in the harem or the kitchen.

Nothing placid about the women in this book.   Hannah Jewell celebrates them, and rightly so. In her intro, she writes that it will make women feel good to know about these women, and reading about them is a healthier pastime “than drinking to oblivion, and just as satisfying as a cathartic scream, (and less alarming to the neighbours). “Shout it to your enemies as you froth at the mouth, write her name in skywriting”.   You get her tenor.

The women in the book are, for the most part, almost unknown,  certainly not particularly celebrated in history books.   History tends to celebrate great men.  Here there are Asian women, Mulatto women, European women, Indian women, English women, and they are in your face – they know the politics of Court and government and society.  They use everything they’ve got – female wiles, great beauty, genius, (Hedy Lamarr had both), bawdy humour, bravery, ambition,  military prowess, and some of them scared people  by wearing trousers.   Several had impressive kill counts.

Hatshephut was alone in Court in Egypt with her son, but had “had enough of pretending that some shitty baby would make a better Pharoah,”  so  took the job for herself, and became the most important Pharoah until Cleopatra, six decades later, in 51 BC.    Hatshephut’s “shitty baby” became Tutmoose (a shitty man),  who took over from her when she died, and destroyed anything that reminded him of her.

Hatshephut had her portraits made with a beard and male regalia and, under her rule, Egypt became successful and prosperous.  It reminds me of Elizabeth the First of England, who told Parliament “I have the body of a weak and feeble woman, but I have the heart and stomach of a king.”   Elizabeth ruled England and Ireland  for 48 years.  She is not in this book.

The book has short chapters on l00 amazing women who ‘took it up’ to the world, and did what they wanted.

Some of it is apocryphal…There’s an Irish saint who turned water to beer for an entire leper colony.

Be warned:  This is not a nice book.  It’s an in your face, rollicking, cussing book.

I was to find out that the word “nasty’ is now widely used in America for rebellion and being uppity.       It takes a cheeky snub at the debate during the US Election, when Hilary Clinton was speaking –  and Donald Trump leaned into the microphone and said “Such a nasty woman.”

Jewell, a pop culture writer who  works for the Washington Post , has done with niceness, and doesn’t hold back on tough language and scathing descriptions of people who stood in the way of women who dared to be challenging.

There is a bawdy black women, Gladys,  who dressed as a man and who could out do any man in naughty songs and badass jokes, and make a living from it.   There are naughty nuns. A slave and harem girl who became a soverign, Khayzuran,  in what is now Iraq.  One of her sons told her to eat a delicious meal he had sent to her.  She fed it to her dog, which promptly died. He also told her to  return to her prayers  and, finally, she had him murdered.  The moral, Jewell writes, is “listen to your mother, or you end up dead.”

Artemis of Caria (now a part of Turkey) wore a lot of eye-shadow, dyed her hair an unacceptable colour, and had swinging breasts.   She was also an Army Commander and a military technician.

Aethelflaer, who ruled Mercia, in the English Midlands, was very nasty.  Her father  had encouraged her, and taught her law, economics, taxes and how to kill Vikings.  She did this with a “massive pointy sword”, often and with flair.

It is a fun book – skip through to Beatrice Webb, and stop for a while with Queen Nanny of the Maroons.   Nell Gwynne, a “ho” if ever there was one, is worth perusing.  Her whole family were “hos”. She was brought up “in a bawdy house to fill strong waters to the gentlemen,” and went on to become an actress and wrote scripts (yes!), her prettiness sending men mad.

Charles the 2nd (a total dissolute)  took her as his mistress, an earlier one having disappointingly bitten the penis off a dead bishop (where does Jewell get these stories?).  Charles and Nell were a perfect couple, and had children too.

Heroism is there.   Irena Sandler saved 2500 children from the Warsaw ghetto

You expect the book to take you up to modern time, at least to women like Germaine Greer et al, but no.    They are not mentioned.  Perhaps because they are still alive, and Jewell can’t be a little loose, flippant and expressive with living, feisty women. And the fact is they do not have quite such colourful lives, such wanton lusts, such murderous instincts. Western society is no longer so afraid of female power.  Who knows what is happening in Korea, the African countries, South American countries right now, what brave women are standing up for their own and others’ rights?